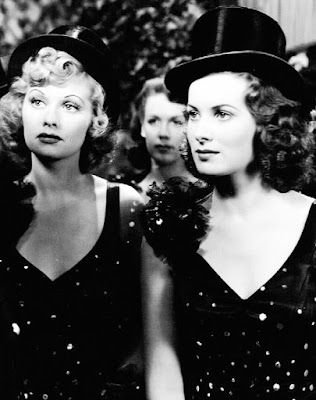 This article is part of the Early Women Filmmakers Blogathon hosted by Movies Silently.

The backstage melodrama Dance, Girl, Dance (1940) is an intriguing parable of female empowerment directed by pioneering filmmaker Dorothy Arzner. Arzner who was one of the few female directors who worked in the old Hollywood studio system, crafts an entertaining tale of friendship between two rival dancers that deals with issues like the clash between art and commerce and the male gaze.

Dance, Girl, Dance tells the story of Judy O'Brien (Maureen O'Hara), a young Irish lass from Akron, Ohio, who dreams of becoming a prima ballerina in New York City. Judy studies under the formidable ballet instructor Madame Basilova (Marie Ouspenskaya), but she can't get a job in the legitimate theater, so she is forced to work in a burlesque house along with her friend, Bubbles (Lucille Ball). 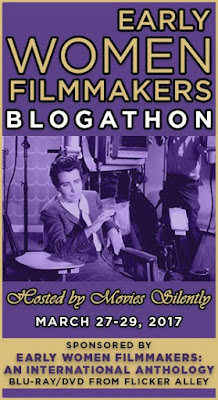 Dance, Girl, Dance, which is based on an original story by Grand Hotel author Vicki Baum, was originally assigned to RKO Pictures director Roy Del Ruth, but he abandoned the project when he couldn't devise a workable script. Arzner, who had helmed a series of films with strong female characters like Christopher Strong (1933) starring Katharine Hepburn and The Bride Wore Red (1937) starring Joan Crawford, immediately saw the potential in Baum's conventional backstage melodrama. Arzner started from scratch and re-fashioned the script to more clearly contrast the differences between Judy's refined aspirations and Bubbles' brash style. "I decided the film would be the art spirit [Judy] vs. the commercial go-getter [Bubbles]," she said in an interview quoted on the TCM database.

The result is a solidly directed B picture that is a forerunner of both the ballet saga The Red Shoes (1948) and the eighties musical Flashdance (1983). There are great performances all-around, especially from O'Hara in her first really good Hollywood role, and the always reliable Ouspenskaya, whose onscreen power wardrobe of ties and severely slicked back hair mimics Arzner's off-screen style. However, Ball, who was then a relatively unknown RKO supporting player, walks off, or more accurately bumps and grinds her way off, with the picture as the brassy Bubbles.

Dance, Girl, Dance also deals with issues of class and sexism in surprisingly modern ways. The Library of Congress cited the movie's "feminist integrity" when it was placed in the National Film Registry; this quality is most obvious in the movie's many dancing sequences. Chorus girls flashing their gams  is a staple of old Hollywood movies --  even the granddaddy of all art cinema, Citizen Kane (1941), gets in the act --but there is rarely any contemplation about how the dancers feel about working in front of a leering male audience.

Dance, Girl, Dance directly confronts these questions like few other old Hollywood films. While Bubbles is content to gyrate in skimpy outfits as long as it allows her to get attention, and more importantly, money, from male clients, the sensitive Judy is humiliated by what she must endure for a paycheck. The only job she can find is as a warm-up act or "stooge" for Bubbles, and the relentless jeering and catcalls finally lead to her lose her temper and, in what is the best scene Arzner ever directed, give a remarkable speech that excoriates the audience for their crude behavior (clip below).

Arzner directed one more film, First Comes Courage (1943), before moving on to teaching at UCLA. Her remarkable career paved the way for another old Hollywood great Ida Lupino, and today's outstanding directors like Kathryn Bigelow, Sofia Coppola, and Lisa Cholodenko.

Dance, Girl, Dance is available on DVD and video on demand.