Bette Davis and the Hollywood Canteen 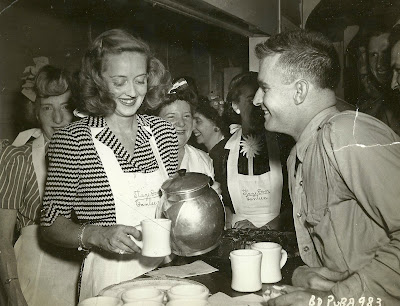 Today, I'm writing about Bette Davis' role in co-founding and running the famous Hollywood Canteen. The photo above shows her serving coffee and doughnuts to World War II servicemen.

This article is part of The Second Annual Bette Davis Blogathon hosted by In the Good Old Days of Classic Hollywood.

Bette Davis is remembered as one of old Hollywood's greatest actresses, but one of her proudest accomplishments was co-founding and operating the Hollywood Canteen. This famous watering hole for World War II service personnel gave soldiers on leave the chance to relax, get a hot meal, and rub shoulders with some of old Hollywood's brightest stars.

The idea for the Hollywood Canteen came out of an encounter in the studio cafeteria between Davis and fellow Warner Bros. star, John Garfield. The actor couldn't serve in the military because of a heart condition, but he had a wonderful idea to help the war effort, as Davis recounts in her autobiography, "This 'n That." Thousands of servicemen and women were passing through Southern California on their way to and from the Pacific war zone, and Garfield thought the Hollywood community should get together and give the soldiers a place where they could get a hot meal and meet real-life movie stars. 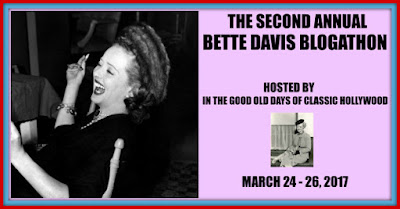 Davis immediately liked the idea and contacted her powerful agent, Jules Stein, to organize the business side of the project. He secured a former stable on Cahuenga Boulevard as the site for the canteen, and got old Hollywood's powerful labor unions to donate their members' services to fix up the vacant building; for example, the electricians installed the lights and the painters created murals on the walls. Stein also pulled strings to get Warner's to donate the proceeds from the all-star musical Thank Your Lucky Stars (1943) to finance the operation of the canteen, which was open to service personnel from any branch of the military (the only requirement for admission was an uniform; women and soldiers of all ethnicities were accepted).

The canteen was an immediate success when it opened on Oct. 5, 1942. Soldiers flocked to the watering hole to get sandwiches, doughnuts, milk, and coffee, and to rub shoulders with the movie stars who volunteered their services to staff the canteen and provide live entertainment for the troops.  On any given night, soldiers could get an autograph from Errol Flynn while he cleared the tables,  get a hot coffee served by Rita Hayworth, watch Lena Horne perform with a big band, and take a turn around the dance floor with Marlene Dietrich.

The canteen became so famous that it inspired a 1944 musical directed by Delmer Daves and starring Robert Hutton and Dane Clark as two soldiers on leave who visit the establishment and rub elbows with top stars like Ida Lupino, Paul Henreid, Barbara Stanwyck,  Joan Crawford, and, of course, Davis and Garfield, who perform their hosting duties with aplomb.

The movie was a big box-office hit in 1944 -- all of the stars donated their salaries to the canteen -- and viewed today, it is still a delightful treat for old Hollywood fans. There are several well-done musical numbers with the highlights being singing cowboy Roy Rogers performing "Don't Fence Me In" with his faithful horse, Trigger, and Jack Benny having a comic battle of the violins with classical musician Joseph Szigeti.

The best part of the film is the many star cameos, including a sassy Stanwyck serving up turkey sandwiches, and Joan Crawford dancing with soldiers in a dress that is adorned with a large kitten wearing a gingham bow (you have to see it to believe it). There are also wonderful appearances by beloved character actors like S.Z. Sakall (his English is unintelligible, but he's adorable nonetheless), Joe E. Brown putting an entire doughnut in his mouth (talk about rare talents), and most thrilling of all, at least for me, dynamic duo Peter Lorre and Sydney Greenstreet doing their villainous double act.

The canteen closed for business three months after the war ended on Thanksgiving Day 1945. Although Davis would go on to give many acclaimed performances, she always held a special place in her heart for her time at the Hollywood Canteen. "There are very few accomplishments in my life that I am sincerely proud of," she wrote in "This 'n That." "The Hollywood Canteen is one of them."

Hollywood Canteen will air at 6:15 a.m. April 15 on TCM. It is available for streaming on Warner Archive; on video on demand; and on DVD.