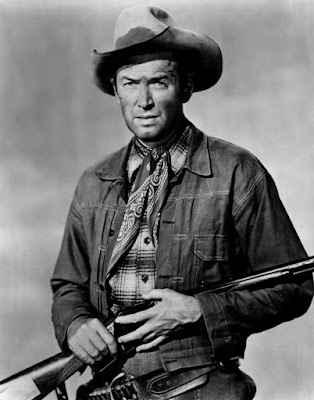 The Western Winchester '73 (1950), starring James Stewart, is one of the classic movies airing on TCM this week.

This week, TCM is airing movies from stars like Kathryn Grayson, Joan Crawford, and Dan Duryea. Plus they are featuring a night of movies from independent African-American filmmakers and laugh-out-loud comedies for April Fool's Day.

TCM Film Noir Franchise: Director Fritz Lang's The Blue Gardenia (1953) at 10 a.m. Sunday finds Anne Baxter accused of murdering a man (Raymond Burr) who assaulted her during a drunken night on the town.

Silent Sunday Nights: Director Frank Borzage's melodrama The Circle (1925) at 12:30 a.m. follows the life of a young man (Creighton Hale) who was abandoned by his mother (played by a very young Joan Crawford) at an early age and now faces the prospect of losing his pretty young wife (Eleanor Boardman).

TCM Imports: Two films from director Francois Truffaut: the coming of age drama The 400 Blows (1959) at 2 a.m. Sunday night/Monday morning and a movie about making movies, Day for Night (1973) at 4 a.m.

Best Day to DVR: All day Friday. The daytime theme of Joan Crawford movies will give viewers such classics as Grand Hotel (1932), The Women (1939), and Humoresque (1946), while prime time will focus on all-time great bad guy Dan Duryea in movies like the Western, Winchester '73 (1950) and the noir, Scarlet Street (1945). 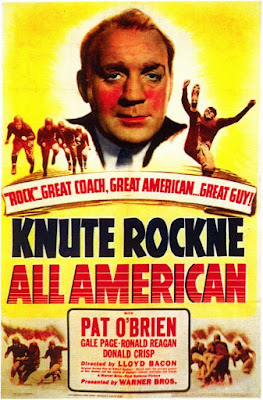 Three daytime picks:  The theme is movies about sports starting with Pat O'Brien as the legendary Notre Dame football coach in Knute Rockne, All American (1940) at 8:45 a.m. Next up, Errol Flynn plays a 19th century fighter who pioneered the sport of boxing in Gentleman Jim (1942) at 12:15 p.m. Finally, Burt Lancaster is an American Indian athlete who faces prejudice in Jim Thorpe -- All-American (1951) at 3:45 p.m.
Prime time lineup:The prime time theme is movies with singing star Kathryn Grayson starting with her role as a feisty actress in Cole Porter's Shakespeare takeoff, Kiss Me Kate (1953) at 8 p.m. Grayson plays a wannabe singer who attracts sailor Frank Sinatra's attention in the MGM hit, Anchors Aweigh (1945) at 10 p.m.
Late night pick:  Grayson took on the role of Magnolia for the 1951 version of Show Boat at 12:30 a.m.

Three daytime picks: The theme is movies set in Rome starting with the all-star adaptation of William Shakespeare's tragedy Julius Caesar (1953) at 6:15 a.m. followed by overworked princess Audrey Hepburn taking a Roman Holiday (1953) at 2:45 p.m. Finally, con artist turned priest Paul Douglas find faith in the Eternal City in the underrated drama When in Rome (1952) at 6:30 p.m.
Prime time lineup: The bittersweet theme for tonight's lineup is the late TCM host Robert Osborne's picks. Osborne, who passed away March 6, starts out the evening with Joanne Woodward's Academy Award-winning performance as a woman with multiple personalities in The Three Faces of Eve (1957) at 8 p.m. followed by Wilson (1944) at 9:45 p.m., which is a biopic about President Woodrow Wilson, who led the U.S. during World War I.
Late night pick: Lizzie at 12:30 a.m. is another 1957 movie about a woman (Eleanor Parker) with multiple personality disorder.

Three daytime picks: The theme is murderous affairs starting with Charles Boyer as a married French nobleman and Bette Davis as the governess who loves him in the soaper All This, and Heaven Too (1940) at 6 a.m. Next, adulterous duo John Garfield and Lana Turner plot her unsuspecting husband's murder in The Postman Always Rings Twice (1946) at 10 a.m. Davis is back in director Paul Henreid's horror film Dead Ringer (1964) at 6 p.m. as a woman who murders her wealthy twin and then takes her place.
Prime time: The theme is movies based on the work of 19th century French writer Guy de Maupassant starting with the horror film Diary of a Madman (1963) at 8 p.m., which is based on Maupassant's short story, The Horla. It stars Vincent Price as a French magistrate who is possessed by an evil spirit. Next is director Max Ophuls anthology film, Le Plaisir (1952) at 10 p.m., which features adaptations of three of Maupassant's stories about love, starring Jean Galland, Madeleine Renaud, and Daniel Gelin.
Late night pick: Director Jean Renoir's film A Day in the Country (1936) at 3:30 a.m. follows the romantic adventures of  a Parisian mother (Jane Marken) and daughter (Sylvia Bataille) in the bucolic French countryside.

Three daytime picks: The theme is movies from Archie Mayo, who directed many of Warner Bros. programmers such as the Constance Bennett melodrama about Philadelphia high society, Two Against the World (1932) at 8:45 a.m. Ever in My Heart (1933) at 11:30 a.m. is an interesting World War I drama that finds Barbara Stanwyck married to a professor (Otto Kruger) who is accused of being a German spy.  Bordertown (1935) at 5 p.m. finds Paul Muni as a Mexican-American lawyer who gets mixed up with the wife (Bette Davis) of a seedy nightclub owner (Eugene Pallette).
Prime time lineup: The lineup features movies from independent African-American filmmakers starting with director Julie Dash's Daughters of the Dust (1991) at 8 p.m., about three generations of women in the Gullah culture. Director Gordon Parks based The Learning Tree (1969) at 10 p.m. on his autobiographical novel about a boy (Kyle Johnson) growing up in rural Kansas who deals with discrimination and prejudice.
Late night pick: The Symbol of the Unconquered (1921) at 3 a.m. is pioneering African-American director Oscar Micheaux's drama about an heiress (Iris Hall) who tangles with the Ku Klux Klan.

Three daytime picks: The theme is movies starring all-time great Joan Crawford starting with her performance a sympathetic stenographer in the all-star drama Grand Hotel (1932) at 7:45 a.m. followed by her turn as a scarred female criminal turned governess in the plastic surgery soaper A Woman's Face (1941) at 1:45 p.m. Finally, Crawford gives one of her best screen performances as a married woman who falls for classical violinist John Garfield in Humoresque (1946) at 3:45 p.m.
Prime time lineup: The evening lineup is dedicated to actor Dan Duryea. He was a memorable villain in many movies including director Anthony Mann's Western, Winchester '73 (1950) at 8 p.m. Duryea gets a rare leading role as an unscrupulous newspaper reporter in The Underworld Story (1950) at 9:45 p.m.
Late night: Duryea appeared in many noirs like Scarlet Street (1945) at 1:30 a.m. where he plays the unscrupulous boyfriend of femme fatale Joan Bennett.

TCM is celebrating April Fool's Day with a prime time lineup of three comedies starting with Woody Allen as a cryogenically frozen man who starts a future revolution in Sleeper (1973) at 8 p.m. followed by the all-star caper It's a Mad, Mad, Mad, Mad World (1963) at 9:45 p.m. Finally, Jack Benny, Carole Lombard, and company foil the Nazis in director Ernst Lubitsch's satire To Be or Not to Be (1942) at 12:45 a.m.

The prime time lineup features two films about brainwashing starting with Laurence Harvey as a Korean War veteran who is trained to be an assassin in The Manchurian Candidate (1962) at 8 p.m. Next, Dirk Bogarde plays a scientist who does brainwashing experiments on himself in The Mind Benders (1963) at 10:30 p.m.