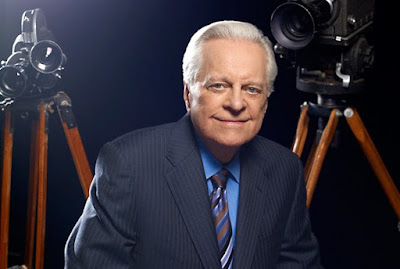 TCM will honor Robert Osborne with a 48-hour tribute this week.

This week, TCM is honoring host Robert Osborne with a 48-hour tribute on Saturday and Sunday. Osborne, who passed away March 6 at age 84, was the face of TCM for 23 years. The network will honor his contributions to classic movies by airing interviews and tributes to the man who was beloved among old Hollywood fans. TCM will continue its regular programming during the week with more treasures from the Disney vault and the annual St. Patrick's Day movie marathon. Just a note: All times are Eastern Standard Time and the highlighted texts have links to full length articles.

Best Day to DVR: Wednesday daytime. There's a great lineup of movies about femmes fatale starting with Joan Bennett in The Woman on the Beach (1947) at 6 a.m. and ending with Jean Simmons in Angel Face (1953) at 6:15 p.m. In between, you've got such memorable ladies as Lizabeth Scott (Too Late for Tears), Mary Astor (The Maltese Falcon) and Lauren Bacall (The Big Sleep).

Three daytime picks:  The theme is movies starring all-time great Katharine Hepburn starting with her role as a female aviator in the pre-code melodrama Christopher Strong (1933) at 6 a.m. Hepburn gives a wonderful performance as a woman who masquerades as her niece to gain the attentions of her former suitor (Franchot Tone) in the Regency romance Quality Street (1937) at 1 p.m. One of Hepburn's more unusual collaborations with Spencer Tracy is the Western, The Sea of Grass (1947) at 4:30 p.m.
Prime time lineup: The prime time lineup features movies from English director Phillip Leacock, who was known for making socially relevant films about children. First up is Take a Giant Step (1959) at 8 p.m. about a black teenager's frustration with the racism in fifties America. Hand in Hand (1961) at 10 p.m. is a British film about the friendship between a Catholic boy (Philip Needs) and Jewish girl (Loretta Parry).
Late night pick: Innocent Sinners (1957) at 4:30 a.m. is a sweet film about an English girl (June Archer), who plants a garden in the ruins of a church that was bombed during World War II.

Three daytime picks: The theme is movies about journeys to Alaska starting with Charlie Chaplin's adventures as a Yukon miner in The Gold Rush (1925) at 7:45 a.m. followed by Joel McCrea as a rugged salmon fisherman in The Silver Horde (1930) at 9:15 a.m. Tony Curtis, Natalie Wood, and Jack Lemmon encounter a polar bear and snowstorm during the Alaska portion of The Great Race (1965) at 5:15 p.m.
Prime time lineup: TCM's guest programmer for March is crime writer Michael Connelly who chose two seventies movies that influenced his fiction: Klute (1971) at 8 p.m. and The French Connection (1975) at 10 p.m..
Late night pick: Connelly was also influenced by Gene Hackman's hard-boiled private eye in Night Moves (1975) at midnight.

Three daytime picks: The theme is femmes fatale starting with Lizabeth Scott going from happily married wife to murderess in Too Late for Tears (1949) at 7:30 a.m. followed by Mary Astor as the manipulative Brigid O'Shaughnessy in The Maltese Falcon (1941) at 11 a.m. Finally, Joan Bennett leads middle-aged nebbish Edward G. Robinson into a life of sin in Scarlet Street (1945) at 3 p.m.
Prime time lineup: The evening lineup features movies shown at the annual Nitrate Picture Show film festival at the Eastman Museum in Rochester, N.Y. First up is the MGM musical, Annie Get Your Gun (1950) at 8 p.m. followed by director David Lean's adaptation of Noel Coward's play, Blithe Spirit (1945) at 10 p.m.
Late Night Pick: Another movie shown at the film festival is director Carol Reed's great British noir, The Fallen Idol (1948) at midnight.

Three daytime picks: The theme is movies about aspiring musicians starting with Fred Astaire and Ginger Rogers playing a musical team who split up so she can become a dramatic actress in The Barkleys of Broadway (1949) at 6 a.m. Astaire plays a has-been hoofer who is trying to make his Broadway comeback in the musical The Band Wagon (1953) at 1:30 p.m. Finally, Judy Garland, Lana Turner, and Hedy Lamarr try to make it in show business in Ziegfeld Girl (1941) at 3:30 p.m.
Primetime lineup: Film critic and historian Leonard Maltin unearths more Treasures from the Disney Vault starting with the Donald Duck cartoon, Good Scouts (1938) at 8 p.m. Next, Disney favorite Fred MacMurray plays a saxophonist who becomes a Boy Scout leader in Follow Me, Boys (1966) at 8:15 p.m. The Hound That Thought He Was a Raccoon (1960) at 10:30 p.m. is about a lost puppy who befriends a mother raccoon.
Late Night Pick: The live-action film, The Incredible Journey (1963) at midnight, follows two dogs and a cat who make their way home after getting lost.

Three daytime picks: TCM kicks off its annual St. Patrick's Day movie marathon with the musical Irene (1940) at 6 a.m., which features playboy Ray Milland romancing Irish shop girl Anna Neagle. Next is James Mason's great performance as a hunted Irish Republican Army member in Odd Man Out (1947) at 2 p.m. followed by  director John Ford's masterpiece, The Informer (1935) at 6:15 p.m. about an IRA member (Oscar winner Victor McLaglen) who turns in his best friend (Wallace Ford) to the British.
Prime time lineup: The Ford movies continue in prime time with the anthology film The Rising of the Moon (1957) at 8 p.m., which features three vignettes about Irish life performed by Dublin's famous Abbey Players. No St. Patrick's Day would be complete without TCM airing  The Quiet Man (1952) at 9:30 p.m.
Late night pick:  The British film Girl with Green Eyes (1964) at midnight follows a naive rural girl (Lynn Redgrave) who moves to Dublin and gets involved with an older man (Peter Finch).

On Saturday and Sunday, TCM is remembering Robert Osborne with a 48-hour tribute featuring interviews, special programs, and tributes. Highlights for Saturday include a Private Screenings program featuring Alec Baldwin interviewing Osborne about his life and career; on at 6 a.m., 1:30 p.m., 8 p.m., and 12:45 a.m. There is also a 20th Anniversary Tribute to Osborne  at 9 a.m., 4:15 p.m., and 4:45 a.m. Osborne interviewed Peter O'Toole at the TCM Classic Film Festival in 2012 at 5:30 p.m., and he interviewed Debbie Reynolds about her life and career in a 2002 Private Screenings interview at 9:30 p.m.