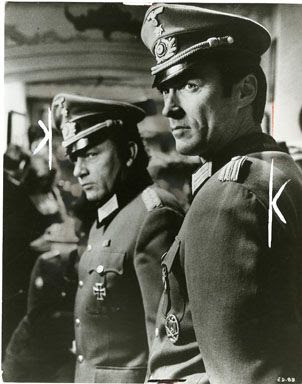 Where Eagles Dare (1968), starring Richard Burton and Clint Eastwood, is one of the classic movies airing on TCM this week.

This week, TCM is airing a week of films featuring star-of-the-month Richard Burton. Plus, they are showing movies from women filmmakers and African-American star Dorothy Dandridge. So, without further ado, let's jump right in to this week's offerings. Just a note: All times are Eastern Standard Time and the highlighted texts have links to full length articles.

Best Day to DVR: Friday daytime. The theme of movies about missing persons starts with the noir Murder, My Sweet (1944) and ends with director Alfred Hitchcock's thriller Rope (1948). In between there's sophisticated private eyes (The Thin Man), a taut modern Western (Bad Day at Black Rock), and Philip Marlowe (Robert Montgomery) on the trail of a missing woman (Lady in the Lake).

Three daytime picks:  A birthday tribute to character actor Guy Kibbee, who was born March 6, 1882, in El Paso, Texas. Kibbee  got one of his few lead roles as a small-town businessman who gets involved with some shady dealings in the Sinclair Lewis adaptation, Babbitt (1934) at 9:15 a.m. Kibbee plays a flustered judge who tries to stop Mickey Rooney and Judy Garland from putting on a show in Babes in Arms (1939) at  1 p.m. followed by Kibbee playing a patriarch of an Indiana family that visits the French Riviera in Mama Steps Out (1937) at 4 p.m.
Prime time lineup: TCM will devote the prime time lineup every day this week to star-of-the-month Richard Burton. Tonight's lineup features his early films starting with his American film debut in the Daphne du Maurier mystery, My Cousin Rachel (1952) at 8 p.m. Burton plays the brother of Presidential assassin John Wilkes Booth in the historical drama Prince of Players (1955) at 9:45 p.m.
Late night pick: Burton became an international star in the Biblical epic, The Robe (1953) at 3:15 a.m.

Three daytime picks: The theme is movies starring all-time great Barbara Stanwyck starting with her performance opposite future husband Robert Taylor in the soaper, His Brother's Wife (1936) at 9:15 a.m., followed by Stanwyck and James Mason as a bored married couple who are both contemplating adultery (he with Ava Gardner; she with Van Heflin) in East Side, West Side (1949) at 2 p.m. Finally, Stanwyck plays a war widow whose romance with George Brent causes a stir in My Reputation (1946) at 6 p.m.
Prime time lineup: The Burton movies continue with  his role as a defrocked Episcopal priest turned Mexican tour guide in the Tennessee Williams adaptation, The Night of the Iguana (1964) at 8 p.m. followed by his Academy Award nominated performance as King Henry VIII in Anne of a Thousand Days (1969) at 10:15 p.m.
Late night pick: Burton plays the quintessential disillusioned young man  in Look Back in Anger (1959) at 1 a.m.

Three daytime picks: The morning theme is movies from female directors starting with Soviet director Larisa Shepitko's drama Wings (1966) at 7:30 a.m. about a World War II fighter pilot (Maya Bulgakova) who can't adjust to civilian life. Pioneering director Agnes Varda's film La Pointe Courte (1955) at 11 a.m. follows life in a rural French fishing village. The afternoon lineup is devoted to films directed by Nicholas Ray, including the groundbreaking teen movie Rebel Without a Cause (1955) at 6 p.m.
Prime time lineup: Burton began his legendary romance with actress Elizabeth Taylor on the set of the ancient epic Cleopatra (1963) at 8 p.m.
Late Night Pick: One of the best Burton-Taylor movies is the Shakespearean romp, The Taming of the Shrew (1967) at 12:15 a.m.

Three daytime picks: A birthday tribute to director S. Sylvan Simon who was born March 9, 1910, in Chicago. He was one of MGM's in-house directors during the 1940s, churning out everything from family movies (Son of Lassie (1945) at 9:45 a.m.) to Westerns (Bandit Wallace Beery bonds with innocent Margaret O'Brien in Bad Bascomb (1946) at 11:30 a.m.) and comedies (Red Skelton plays a traveling salesman who gets mixed up in murder in The Fuller Brush Man (1948) at 4:30 p.m.).
Primetime lineup: The Burton-Taylor movies continue with their performances as battling couples in Who's Afraid of Virginia Woolf (1966) at 8 p.m. and The V.I.P.S (1963) at 10:30 p.m.
Late Night Pick: The romance The Sandpiper (1965) at 12:45 a.m. finds Episcopal priest Burton falling for artist Taylor.

Three daytime picks: The theme is movies about missing persons starting with detective Philip Marlowe (Dick Powell) looking for the former girlfriend (Claire Trevor) of an ex-con (Mike Mazurki) in the noir Murder, My Sweet (1944) at 6 a.m. followed by Spencer Tracy trying to locate a Japanese-American family in Bad Day at Black Rock (1955) at 1:15 p.m. Finally, a missing man (Dick Hogan) is the subject of dinner-party speculation in the Hitchcock thriller, Rope (1948) at 6:30 p.m.
Prime time lineup: TCM wraps up a week of Burton movies with some of his best later performances starting with the crackling World War II action-adventure, Where Eagles Dare (1968) at 8 p.m. in which Burton plays the leader of an Allied expedition to a mountaintop fortress controlled by the Nazis. Burton and Rex Harrison play a gay couple living in East London in Staircase (1969) at 10:45 p.m.
Late night pick:  Burton gives a beautifully understated performance as a psychiatrist who is trying to help a troubled boy (Peter Firth) in Equus (1977) at 2:15 a.m.

The prime time lineup features World War II films set in Italy starting with a group of allied soldiers who get lost in enemy terrain in The Quick and the Dead (1963) at 8 p.m. followed by the story of a platoon of soldiers from Texas who are taking part in the Allied invasion of Italy in A Walk in the Sun (1945) at 9:45 p.m. Force of Arms (1951) at midnight is an adaptation of Ernest Hemingway's novel A Farewell to Arms that is set in World War II Italy with William Holden and Nancy Olson playing the star-crossed lovers.

The prime time line up is all about actress Dorothy Dandridge starting with her best-known performance as a femme fatale who torments soldier Harry Belafonte in Carmen Jones (1954) at 8 p.m. Dandridge and Belafonte also starred in the drama Bright Road (1953) at 10 p.m. about an idealistic teacher (Dandridge) in a Southern school. The Dandridge Sisters (Dorothy, her sister, Vivian, and friend Etta Jones) perform two numbers in the short, Snow Gets in Your Eyes (1938) at 11:30 p.m.