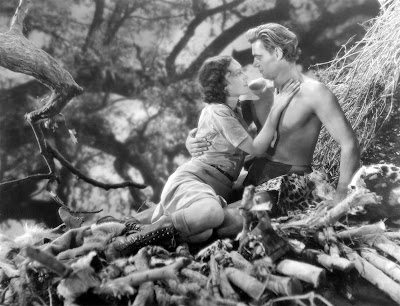 Tarzan the Ape Man (1932), starring Maureen O'Sullivan and Johnny Weissmuller, is one of the 1001 classic movies you should see.

Each Monday, I'm going to recommend a classic movie you should see (for the reasons behind the 1001 series and reviews of earlier films covered go here). The new film Kong: Skull Island (2017) has brought the monkey movie back into the spotlight, so with that in mind our March theme is Going Ape in Old Hollywood. This week's selection is the action-adventure film, Tarzan the Ape Man (1932).

Tarzan the Ape Man begins when young English lady Jane Parker (Maureen O'Sullivan) arrives in Africa to visit her explorer father, James (C. Aubrey Smith). The elder Parker and his business partner Harry Holt (Neil Hamilton) plan to travel to a remote elephant burial ground so they can plunder the ivory despite the fact that the native tribes warn them that the region is cursed. Jane goes along with them, and when she is kidnapped by a strange man named Tarzan (Johnny Weissmuller) who lives in the trees with the apes, James and Harry begin to understand how dangerous nature can be. 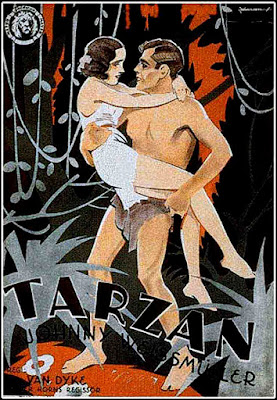 By 1932, author Edgar Rice Burroughs' tale of an English lord who grows up in the jungle was a massive international bestseller that had already been made into a series of silent films starring Elmo Lincoln. Burroughs was never shy about cashing in on his creation, so he persuaded MGM to make a sound version using leftover African location footage from its 1931 action-adventure hit, Trader Horn (Ironically, the author hated the movie and later sued the studio). The result was the definitive Tarzan movie that spawned 12 sequels and made Tarzan and his famous yell pop culture icons.

Most of the simians in Tarzan the Ape Man are people dressed in laughably bad monkey costumes. The lone exception is Tarzan's chimpanzee friend, Cheeta, who is played by animal actor Jiggs. Cheeta doesn't appear in Burroughs' novel, but, in many ways, the good-natured chimp is the most likable character in the film. He's not only cute, but he is also the only character who doesn't engage in casual racism and rampant big-game killing sprees (the body count for both Africans and endangered species is alarmingly high).

Tarzan the Ape Man Viewer's Guide: This movie created one of old Hollywood's most enduring pop culture icons. Here's what to look for when you watch:
1. The Tarzan yell. There are many stories about how Tarzan's distinctive yell was created -- theories include Weissmuller's own voice, an Austrian yodeler, and  an opera singer -- but whatever the source of the sound it is undeniable effective. In Tarzan the Ape Man, viewers hear the yell before Weissmuller appears on screen, which creates an eerie effect that is still chilling in 2017.
2. Weissmuller. The former Olympic swimmer was working as a BVD model when MGM chose him over Clark Gable and Joel McCrea for the role of the athletic jungle lord. Tarzan the Ape Man made Weissmuller an international sensation, and he still remain's the screen's definitive Tarzan.
3. The character of Jane. Newcomer O'Sullivan's portrays Tarzan's mate as more than capable of holding her own amidst the dangers of ithe African jungle. More importantly, she is a female character who is completely in charge of her own destiny. Her famous line, "not a bit afraid, not a bit sorry," is still a great quote for independent women everywhere.
4. Costumes. Tarzan the Ape Man was made in pre-code Hollywood when skimpy costumes were de rigueur. Even by those standards, the barely there ensembles give viewers an eyeful of virtually all that God gave both Weissmuller and O'Sullivan.

Other critics: Tarzan the Ape Man has an 100 percent fresh rating at Rotten Tomatoes and Leonard Maltin writes that "the original Weissmuller-MGM Tarzan entry is a little starchy, but still holds up thanks to a plush production and vivid atmosphere" in a three star review for his Classic Movie Guide. Critics in 1932 enjoyed the movie despite complaining about the hackneyed plot. Mordaunt Hall of The New York Times considered the movie a "film for youngsters home from school," but he nevertheless got caught up in the story, writing that "the scenes wherein Tarzan swings from tree to tree and takes a high dive into a lake are done most effectively. He makes a peculiar cry, a noise like blowing on a comb covered with paper, when he requires assistance. The elephants are usually an the qui vive [on the lookout] and they lumber along to Tarzan and help him or his friends."

The bottom line: Tarzan the Ape Man is dated and somewhat silly, but it is nevertheless worth watching for Weissmuller and O'Sullivan's chemistry, the African location footage, and the first appearance of the famous Tarzan yell.

Availability: Tarzan the Ape Man is available for streaming on the Internet Archive.

Next week, I'll wrap up the March theme of Going Ape in Old Hollywood with the science fiction classic, The Planet of the Apes (1968).