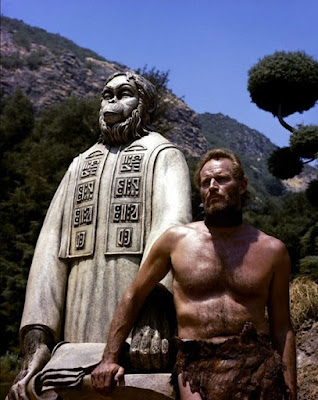 Planet of the Apes (1968), starring Charlton Heston, is one of the 1001 classic movies you should see.

Each Monday, I'm going to recommend a classic movie you should see (for the reasons behind the 1001 series and reviews of earlier films covered go here). The new film Kong: Skull Island (2017) has brought the monkey movie back into the spotlight, so with that in mind our March theme is Going Ape in Old Hollywood. This week's selection is the science-fiction film, Planet of the Apes (1968).

Planet of the Apes begins when a crew of U.S. astronauts led by arrogant commander George Taylor (Charlton Heston) accidentally crash into a deserted planet many years in the future. The men have no choice but to explore their surroundings; however, instead of the desolate environment they expected to find, they come upon a strange civilization where apes rule the world and humans are treated like animals. The simians capture Taylor and take him to Ape City where he attracts the attention of animal psychologist Zira (Kim Hunter) and her archaeologist fiance Cornelius (Roddy McDowall). 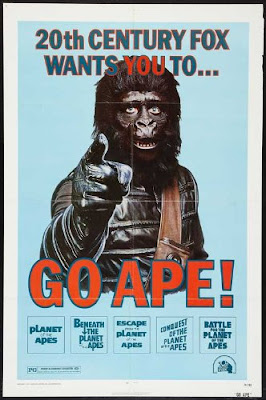 Planet of the Apes is based on French writer Pierre Boulle's 1963 novel, La Planete des Singes. Producer Arthur Jacobs had shopped an adaptation to every major studio in Hollywood with little success until 20th Century Fox Vice President Richard Zanuck agreed to finance the project along with another Jacobs-produced film, Dr. Doolittle (1968). The movie was considered a huge gamble -- major stars like Marlon Brando, Burt Lancaster, and Jack Lemmon turned the role of Taylor down -- but it became a huge hit that spawned four sequels and a bonanza of merchandising that included Planet of the Apes board games, figurines, and comic books.

Planet of the Apes groundbreaking monkey costumes were designed by legendary makeup artist John Chambers, who won a special Academy Awards for his efforts. Chambers worked with a 78-member team to create the rubber prosthetics that covered the actors' faces, hands, and feet. The prosthetics were remarkably flexible, which gave the actors who portrayed apes the ability to make facial expressions that could register everything from shock to sadness. The performances of Hunter and McDowall as two chimpanzees who question the harsh treatment of humans are particularly effective, and both actors would go on to appear in several sequels.

Planet of the Apes Viewer's Guide: Four decades of sequels, spinoffs, and reboots haven't lessened the considerable impact of the original film. Here's what to look for when you watch:

1. Heston. By 1968, Heston was an Oscar winner known for appearing in prestigious projects like Ben-Hur (1959) and The Ten Commandments (1956). The success of Planet of the Apes launched him on a successful second career as an action hero in movies like The Omega Man (1971) and Soylent Green (1973).
2. Rod Serling. The Twilight Zone creator penned the original script for Planet of the Apes. It went through several revisions -- most of the ham-fisted puns like "human see, human do" and "he never met an ape he didn't like" came from later writers -- but Serling's shock ending, which doesn't appear in Boulle's novel, was kept intact.
3. Set Design. The ape civilization was much more advanced in Boulle's novel, but it was changed to a primitive society to save money.
4. Dr. Zaius. Edward G. Robinson was originally cast as the orangutan philosopher, but he had difficulties with the ape makeup, which led Jacobs to pick Shakespearean actor Maurice Evans, who was best known to American audiences for his appearances on the TV show Bewitched as Samantha's father.

Other critics: Planet of the Apes has a 90 percent fresh rating at Rotten Tomatoes. Critics in 1968 had mixed opinions of the movie. The Variety critic handed in a rave review, calling the film "amazing" and adding that "the totality of the film works very well, leading to a surprise ending. The suspense, and suspension of belief, engendered is one of the film’s biggest assets." However, Renata Adler of The New York Times panned the movie writing that is was a "liberal tract" that was "no good at all, but fun, at moments, to watch."

The bottom line: The original Planet of the Apes still remains an unparalleled popcorn movie experience. Watch it for Heston's iconic performance, the clever script, and, of course, those "damn, dirty apes."

Availability: Planet of the Apes is available on Blu-ray, DVD, and video on demand.


Next week, I'll begin the April theme of Easter movies with James Stewart and his giant rabbit friend in Harvey (1950).