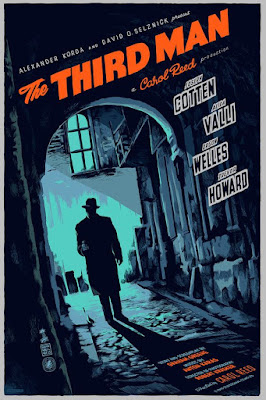 The Cold War thriller The Third Man (1949) is one of the classic movies Netflix Instant added in February.


If you want to fall in love with classic movies this Valentine's Day, Netflix Instant added five new titles in February that are sure to entertain you on a cold winter's night. The diverse array of films include a fun rom-com, an all-star World War II movie, and a collection of 20 newly restored movies from African-American filmmakers. FYI: the highlighted text leads to links to full-length articles.

Desk Set (1957): This fun rom-com about a computer expert (Spencer Tracy) who threatens the livelihood of a reference librarian (Katharine Hepburn) is set during the Christmas season, but it makes a fun Valentine's Day treat. This is one of the most delightful Tracy-Hepburn films with great supporting performances from Joan Blondell and Gig Young. Don't miss Hepburn reciting the poem, "Curfew Must Not Ring Tonight," at the end of the film.

The Longest Day (1962): This World War II film about the D-Day invasion on June 6, 1944, accurately recreates the events surrounding one of the momentous events in 20th century history. The film is full of great performances from big-name stars, including Red Buttons as an unlucky paratrooper, John Wayne as a tough-as-nails infantry commander, and, my personal favorite, Richard Burton as a brooding RAF officer.

Pioneers of African-American Cinema: A great way to celebrate Black History Month is to watch this collection of 20 newly restored films from pioneering filmmakers like Oscar Micheaux and Spencer Williams. The movies cover a wide range of genres, including Westerns, war movies, and religious dramas. Titles include Within Our Gates (1920), Birthright (1924), and Dirty Gertie from Harlem U.S.A. (1946).

The Third Man (1949): This British noir about a naive writer (Joseph Cotten) who comes to postwar Vienna to find an old friend (Orson Welles) is quite simply one of the masterpieces of world cinema. Director Carol Reed's evocative cinematography of the bombed out Austrian capital blends perfectly with Anton Karas' memorable zither score. Don't miss Welles at his charismatic best.

Voyage to the Bottom of the Sea (1961): This fun sci-fi movie about a scientist (Walter Pidgeon) who builds a nuclear submarine that can traverse the ocean's depths has a great supporting cast, including Joan Fontaine, Peter Lorre, and a pre-I Dream Of Jeannie Barbara Eden. This film spawned a hit TV series starring Richard Basehart and David Hedison.