Love Among the Ruins 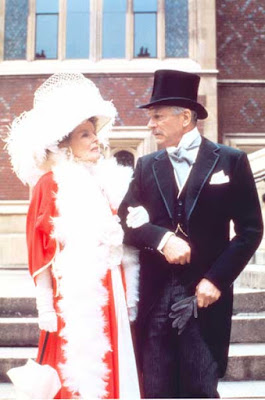 This article is part of The Movie of the Week Blogathon hosted by Classic Film and TV Cafe.

By the mid-1970s, the new auteur-driven style of  cinema had swept many old Hollywood stars and old Hollywood filmmakers off the silver screen. However, these icons found a welcome home on TV, where the movie of the week format allowed them to star in high-quality productions that earned big ratings and critical acclaim. One of the best of the seventies made-for-TV movies is Love Among the Ruins (1975), an Edwardian courtroom drama starring Oscar-winning legends Katharine Hepburn and Laurence Olivier and directed by the great George Cukor.

Love Among the Ruins tells the story of Jessica Medlicott (Hepburn), a wealthy, widowed actress who becomes romantically involved with a fortune-hunting young man named Alfred Pratt (Leigh Lawson). When the scheming Alfred sues Jessica for breach of promise (this means not honoring a proposal of marriage), she is forced to hire legendary barrister Sir Arthur Granville-Jones (Olivier) to defend her. Although Jessica doesn't remember it, she and Sir Arthur had a brief love affair several decades ago, and the attorney has carried a torch for her ever since.

Love Among the Ruins is based on a never-produced play by James Costigan that was written for famed theatrical couple Alfred Lunt and Lynn Fontanne (the title comes from a poem by Robert Browning). Hepburn and Cukor, who worked together in such classics as The Philadelphia Story (1940) and Little Women (1933), decided on the script as the next project in their long and fruitful collaboration, and ABC agreed to produce the film as a movie of the week.

Both Cukor and Hepburn only wanted Olivier for the part of Sir Arthur (the actress was spurred on by a question from talk show host Dick Cavett about never working with Olivier; the feisty Hepburn snapped that "neither of us are dead yet" to Cavett's query). However, the famed Shakespearean was still busy with many lucrative supporting roles in big-budget movies, and he was reluctant to take on an (to his mind)  insignificant TV movie until a charm offensive by both Cukor and Hepburn got Olivier to sign on. Although Olivier later remembered the production as "a lovely pink shooting star," he was somewhat anxious during the filming, frequently wondering aloud how "one makes a TV movie?" to the amused crew.

The result was an unqualified success. Love Among the Ruins hauled in a Peabody Award and several Emmys, including trophies for Cukor and both stars. Viewed today, it is a delightful comedy-drama that, although it was clearly made on a TV budget (the sets are cheap and the special effects are cheesy), still features great performances from both stars. Hepburn looks smashing in her Edwardian gowns and hats, and her performance as the beautiful, but addled Jessica reaches the dizzy comic heights of her screwball heroines of the 1930s.

As great as Hepburn is, Olivier is a revelation. His portrayal of the lovesick Sir Arthur is one of his great performances in a career filled with triumphs. Cukor toned down the actor's penchant for hammy thesping in exchange for a quiet performance that still allowed Olivier to show off his considerable skills. He quotes poetry, including Shakespeare, and the justly celebrated courtroom scene is an acting masterclass (watch for his little whirl of triumph in the end), but it is in the movie's quieter moments that he is most effective. In a few scenes, he lets Sir Arthur's mask of the great barrister slip to reveal a man whose heartbreak and loneliness are all too real.

If you have 102 minutes to spare, watching Love Among the Ruins is a great way to spend President's Day. A video of the full movie is below.