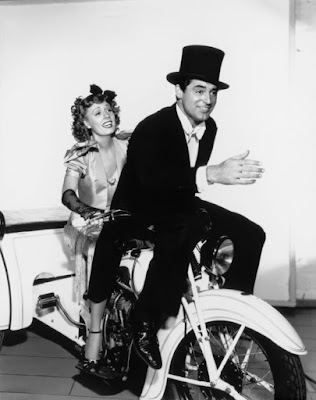 The Awful Truth (1937) starring Irene Dunne and Cary Grant, is one of the 1001 classic movies you should see.

Each Monday, I'm going to recommend a classic movie you should see (for the reasons behind the 1001 series and reviews of earlier films covered go here). February's theme is the leading ladies of Cary Grant. This week's actress is Irene Dunne who appeared with Grant in three movies, including the screwball comedy The Awful Truth (1937).


The Awful Truth tells the story of Jerry (Grant) and Lucy Warriner (Dunne), a New York City married couple who both suspect each other of infidelity. They decide to divorce, and while both find other partners -- Lucy becomes engaged to an Oklahoma oil millionaire (Ralph Bellamy), and Jerry takes up with a wealthy socialite (Molly Lamont) -- they just can't seem to let go of each other. Hijinks ensue when both Jerry and Lucy pull several embarrassing stunts in front of their new partners. 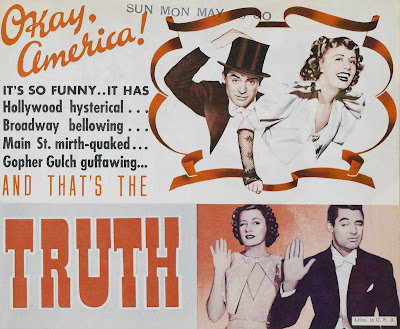 Both Grant and director Leo McCarey were at loose ends when Columbia Pictures chief Harry Cohn handed them a script of a 1922 play by Arthur Richman that had already been filmed twice (a 1925 silent version starred Warner Baxter and Agnes Ayres, and a 1929 talkie starred Ina Claire and Henry Daniell). Cohn was looking for a successful follow-up for Dunne's screwball hit, Theodora Goes Wild (1936), but McCarey thought the script was terrible so he simply tore it up in favor of improvised scenes from the talented cast. The result was a huge box-office smash that made Grant a sought-after leading man and won McCarey a best director Oscar.

The Awful Truth was the first of three films Grant and Dunne made together: The other two are the screwball My Favorite Wife (1940) and the drama Penny Serenade (1941). Dunne was already a top star when she made the movie, but Grant's charismatic performance catapulted him to the top ranks in thirties Hollywood. Before he made The Awful Truth, he was a moderately successful actor with a long string of films to his credit, but the movie's meteoric success forever implanted the image of Grant, with his quick wit, suave good looks, and white tie and tails, as the ideal old Hollywood leading man.

The Awful Truth Viewer's Guide: This movie is simply one of the funniest films ever made in old Hollywood. Here's what to look for when you watch:

1. Comedy of remarriage.The Awful Truth is part of sub-genre of screwball comedy that film scholars often refer to as the comedy of remarriage. Comedies of remarriage, which usually involve a quarreling couple who make up in the final reel,  flourished between 1937-1942. The Philadelphia Story (1940), Mr. and Mrs. Smith (1941), and His Girl Friday (1940) are all good examples.
2. McCarey's directing style. McCarey honed his improvisational directing skills on films with The Marx Brothers and W.C. Fields, and, although his loose style drove the fussy Grant to distraction, it led to some of the movie's funniest moments, such as when Dunne and Bellamy duet to "Home on the Range."
3. Bellamy. Bellamy played everything from criminals to President Franklin Roosevelt in his 62-year career, but he is perhaps best remembered today for playing also-ran boyfriends in this movie and His Girl Friday. He deservedly received a best supporting actor Academy Award nomination for this film.
4. Skippy. The Warriners' wire hair fox terrier, Mr. Smith, was played by canine actor Skippy, who gained fame in The Thin Man movies. He also appeared opposite Grant in Bringing Up Baby (1937).

Other critics: The Awful Truth has a 91 percent fresh rating at Rotten Tomatoes and Leonard Maltin calls the movie "hilarious" in a three and 1\2 star review for his Classic Movie Guide. Critics in 1937 handed in rave reviews, especially for Grant. The critic for Variety noted that the film was "Cary Grant's best, fast light comedy to date" and even the usually dyspeptic Bosley Crowther of The New York Times got in the act, praising The Awful Truth as "pure poetry in motion."

The bottom line: The Awful Truth is as fresh and funny today as it was when it was released. 80 years haven't dimmed the appeal of Dunne's sassy heroine or Grant's sophisticated, but side-splitting style.

Availability: The Awful Truth is available on DVD and video on demand.

Next week, I'll continue the February theme of the leading ladies of Cary Grant with he and Ingrid Bergman in the Hitchcock thriller, Notorious (1946).