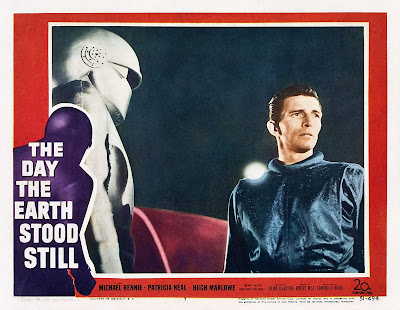 The science fiction classic, The Day the Earth Stood Still (1951), is one of the classic movies Netflix Instant added in January.

If your new year's resolution is to watch more classic movies, then get ready to fire up Netflix Instant this January. The streaming giant added five crowd-pleasing movies from the 1950s and 1960s that will keep you entertained on a cold winter's night. FYI: The highlighted text has links to full-length articles.

The Day the Earth Stood Still (1951): This seminal science-fiction film about an alien (Michael Rennie) who visits Washington D.C. in order to plead for an end to nuclear armament is still one of the best made and best remembered of the fifties sci-fi era.

The Inn of the Sixth Happiness (1958): Ingrid Bergman gives one of her most radiant performances as real-life missionary Gladys Aylward, who devoted her life to helping the Chinese people. This movie features a wonderful final performance from Robert Donat and Bergman at her movie-star best, especially in the tear-jerking final scene.

The Parent Trap (1961): One of Disney's most successful live-action movies finds a double dose of Hayley Mills as twins who are determined to reunite their divorced parents (Maureen O'Hara and Brian Keith).

The Sons of Katie Elder (1965): If you're willing to suspend disbelief long enough to entertain the notion that John Wayne and Dean Martin are blood kin then you'll find a fun revenge Western with  George Kennedy as a memorable baddie.