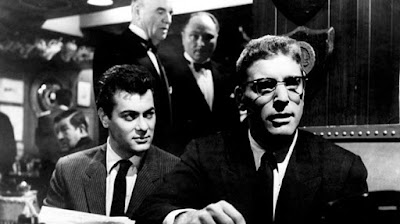 Sweet Smell of Success (1957), starring Tony Curtis and Burt Lancaster, is one of the classic movies airing on TCM this week.

This week, TCM is airing great movies from stars like Red Skelton, Paul Henreid, and Warren Oates. Plus, they are putting the spotlight on movies about ancient Egyptian queen Cleopatra and sharing movie night menus. So, without further ado, let's jump right in to this week's offerings. Just a note: All times are Eastern Standard Time and the highlighted texts have links to full length articles.

Silent Sunday Nights: Seven shorts starring comedienne Mabel Normand starting at midnight. There are two of her movies with the Keystone Cops: The Water Nymph (1912)  and Bangville Police (1913). The rest of the movies feature her onscreen partnership with Roscoe "Fatty" Arbuckle. They are  Mabel's Dramatic Career (1913); Mabel's Married Life (1914); He Did and He Didn't (1916); Fatty and Mabel's Simple Life (1915), and Fatty and Mabel Adrift (1916).

TCM Imports: Italian director Federico Fellini's comedy And the Ship Sails On (1983) at 2:30 a.m. follows the passengers on a luxury liner who have come to mourn an opera star.

Three daytime picks: The theme is movies starring Red Skelton starting with his time-traveling comedy, DuBarry Was a Lady (1943) at 7:30 a.m. followed by Bathing Beauty (1944) at 11 a.m. Finally, Skelton plays a bumbling photographer who gets mixed up with heiress Arlene Dahl in Watch the Birdie (1950) at 5:30 p.m.
Prime time lineup: The evening lineup features food writers Andre and Tenaya Darlington, who are screening a night of movies filled with fabulous parties starting with Ruth Chatterton as an auto-executive who likes to throw lavish get-togethers in Female (1933) at 8 p.m. followed by everybody's favorite martini-swilling dinner-party hosts, Nick and Nora Charles (William Powell and Myrna Loy) in The Thin Man (1934) at 9:15 p.m.
Late night pick: Holly Golightly (Audrey Hepburn) was New York City's original party girl in Breakfast at Tiffany's (1961) at 1:15 a.m.

Three daytime picks: A birthday tribute to Paul Henreid who was born Paul Georg Julius Hernreid Ritter von Wassel-Waldingau on Jan. 10, 1908, in Trieste, Italy (it was then part of Austria). Henreid is best known today for playing the noble Victor Laszlo in Casablanca (1943), but he was also adept in swashbucklers like The Spanish Main (1945) at 6:30 a.m. and costume dramas like the romance Song of Love (1947) at 12:30 p.m., in which he plays the composer Robert Schumann. Henreid played another anti-Nazi fighter in the sound remake of The 4 Horsemen of the Apocalypse (1961) at 4:15 p.m.
Prime time lineup: TCM is featuring films about prison each Tuesday in January. This week's lineup includes two seventies prison escape movies, starting with Dustin Hoffman and Steve McQueen trying to break out of Devil's Island in Papillon (1973) at 8 p.m. followed by Clint Eastwood and company digging their way out of The Rock in Escape from Alcatraz (1979) at 10:45 p.m.
Late night pick: The expose of the prison system in the American South, I Am a Fugitive from a Chain Gang (1932) at 3 a.m. is one of Warner Bros. first ripped-from-the-headlines dramas. 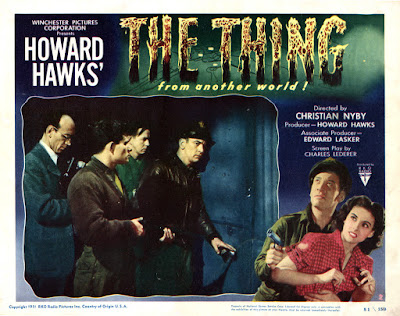 Three daytime picks: The theme is space movies starting with two fifties sci-fi classics: Forbidden Planet (1956) at 8:15 a.m. and The Thing from Another World (1951) at 10 a.m. Director Robert Altman's take on the space race, Countdown (1968) at 3:45 p.m., finds James Caan and Robert Duvall vying to be the first astronauts on the moon.
Prime time lineup: The theme is movies that were influenced by American painter Edward Hopper, starting with director Alfred Hitchcock's horror film Psycho (1960) at 8 p.m. The creepy Bates house was strongly influenced by a Hopper painting, "House by the Railroad." Hopper's famous painting "Nighthawks" was inspired by Ernest Hemingway's story, The Killers (1946) at 10 p.m., which was later made into a great noir starring Burt Lancaster and Ava Gardner.

Three daytime picks: The theme is reunited spouses starting with Irene Dunne as a shipwrecked woman who returns just in time for her husband's (Cary Grant) remarriage in My Favorite Wife (1940) at 7:45 a.m. Norma Shearer and Robert Montgomery play exes who are honeymooning at the same hotel in Private Lives (1931) at 11 a.m. The all-star drama The V.I.P.S (1963) find Elizabeth Taylor as an actress who is leaving her millionaire husband (Richard Burton) for Louis Jourdan.
Primetime lineup: TCM is devoting every Thursday in January to star-of-the-month Jane Wyman. Tonight's lineup focuses on her best movies of the 1940s starting with Johnny Belinda (1948) at 8 p.m., her Oscar-winning role as a deaf-mute woman living in an isolated town on Cape Breton Island. Wyman gives a stellar performance as the tough matriarch of a Florida pioneer family in The Yearling (1946) at 10 p.m .
Late Night Pick: Wyman first earned critical praise as the dedicated girlfriend of an alcoholic writer (Ray Milland) in The Lost Weekend (1945) at 12:15 a.m.

Three daytime picks: The Wyman movies continue with Crime by Night (1944) at 6:15 a.m. in which the actress plays the loyal girl Friday of private eye Jerome Cowan (together they uncover a nefarious spy ring). Wyman plays the love interest of famous outlaw Jim Younger (Arthur Kennedy) in the Western, Bad Men of Missouri (1947) at noon. The afternoon lineup is about superstitions in the movies, including the murder mystery, The Thirteenth Chair (1937) at 4:30 p.m., which stars Dame May Whitty as a psychic who is called in by Scotland Yard to help with a murder investigation.
Prime time lineup: The theme is movies about ancient Egyptian queen Cleopatra, starting with Claudette Colbert vamping her way through the role in director Cecil B. DeMille's 1934 version at 8 p.m. followed by Elizabeth Taylor's legendary turn as the queen of the Nile at 10 p.m.
Late night pick:  The British spoof, Carry On Cleo (1965) at 2:30 a.m.,  finds Julius Caesar (Kenneth Williams) uttering the immortal line, "Infamy, infamy, they've all got it in for me."

The prime time lineup is all about actor Warren Oates starting with his role as a small-town Mississippi cop in the racial drama In the Heat of the Night (1968) at 8 p.m. followed by Private Property (1960) at 10 p.m., a movie about the seduction of a housewife (Kate Manx) by two drifters (Oates and Corey Allen) that was rated X  in the 1960s. Oates gives a charismatic performance as the famed "Public Enemy No. 1" in Dillinger (1973) at 11:30 p.m.

The prime time line up features two of director Alexander Mackendrick's best movies: the noir, Sweet Smell of Success (1957) at 8 p.m. is simply one of the best American films ever made featuring career-best performances from both Tony Curtis and Burt Lancaster and James Wong Howe's atmospheric cinematography of New York City at night. The Ladykillers (1956) at 10 p.m. is a gentle comedy about a dotty old lady (Katie Johnson) who foils a gang of thieves led by Alec Guinness.