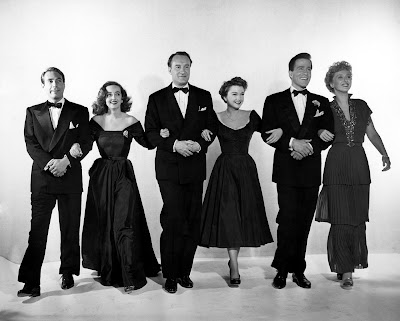 TCM is kicking off its 31 Days of Oscar film festival with All About Eve (1950). Pictured from left to right are Gary Merrill; Bette Davis; George Sanders; Anne Baxter; Hugh Marlowe, and Celeste Holm.

This week, TCM is kicking off its annual 31 Days of Oscar film festival on Wednesday. This year's festival will present Academy Award winning and nominated films in alphabetical order. This week's entries range from A to C starting with Abe Lincoln in Illinois (1940) at 6 a.m. Wednesday and ending with Comrade X (1940) at 5 a.m. Sunday night/Monday morning. So, without further ado, let's jump right in to this week's offerings. Just a note: All times are Eastern Standard Time and the highlighted texts have links to full length articles.

Best Day to DVR: All day Wednesday. 31 Days of Oscar kicks off with a selection of great movies that begin with the letter A, including a delightful Spencer Tracy-Katharine Hepburn rom-com (Adam's Rib), the best Errol Flynn-Olivia de Havilland swashbuckler (The Adventures of Robin Hood), and one of the best backstage movies ever made (All About Eve).

Three daytime picks: The theme is movies starring Austrian actor Helmut Dantine. He is probably best known today for playing a desperate refugee in Casablanca (1943), but he mostly played Nazi officers in movies like Edge of Darkness (1943) at 6:30 a.m. about the German occupation of Norway. Hotel Berlin (1945) at 12:30 p.m. is the Grand Hotel-esque tale of a group of guests staying in the German capital at the end of World War II. They include Peter Lorre, Faye Emerson, and Dantine as an undercover resistance fighter. Dantine was back to playing a Nazi in the thriller Operation Crossbow (1965) at 5:30 p.m.
Prime time lineup: The theme is movies about Las Vegas starting with the musical Meet Me in Las Vegas (1956) at 8 p.m. about a ballerina (Cyd Charisse) who becomes a gambler's lucky charm followed by noir The Las Vegas Story (1952) at 10 p.m. in which newlywed Vincent Price finds out some unsavory secrets about his bride (Jane Russell).
Late night pick: Elvis Presley and Ann-Margret heat up Sin City in the electrifying musical Viva Las Vegas (1964) at 11:45 p.m.

Three daytime picks: A birthday tribute to Mario Lanza, who was born Alfred Cocozza on Jan. 31, 1921, in Philadelphia. Lanza was signed to a contract with MGM in 1947 after studio chief Louis B. Mayer heard him sing at the Hollywood Bowl. His breakthrough film was The Toast of New Orleans (1950) at 6:15 a.m. in which he sang the huge hit, "Be My Love." Lanza continued to make musicals for MGM throughout the 1950s including the charming film, Seven Hills of Rome (1958) at noon, which was filmed on location in the Eternal City. Lanza's passion project was The Great Caruso (1951) at 4 p.m. in which he sang many of the arias made famous by the legendary tenor Enrico Caruso.
Prime time lineup: TCM is featuring films about prison each Tuesday in January. This week's lineup is all about real-life stories starting with Burt Lancaster as avian-loving inmate Robert Stroud in Birdman of Alcatraz (1962) at 8 p.m. followed by the story of the doctor (Warner Baxter) who treated Lincoln assassin John Wilkes Booth in director John Ford's The Prisoner of Shark Island (1936) at 10:45 p.m.
Late night pick: Spencer Tracy and Bette Davis star in 20,000 Years in Sing Sing (1932) at 12:30 a.m., which was based on the memoirs of warden Lewis E. Lawes. 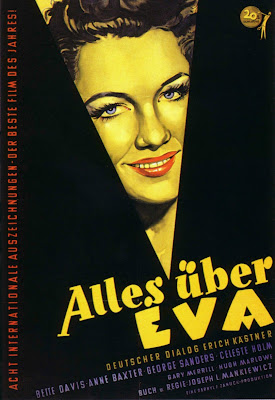 Three daytime picks: TCM kicks off 31 Days of Oscar with several great movies beginning with the letter A. First up is Spencer Tracy and Katharine Hepburn playing married attorneys who are on opposite sides in Adam's Rib (1949) at 8 a.m. followed by Errol Flynn facing off against wicked Prince John (Claude Rains) in The Adventures of Robin Hood (1938) at 12:15 p.m. Ellen Burstyn gives an Oscar winning performance as a widowed waitress who longs to be a singer in director Martin Scorsese's Alice Doesn't Live Here Anymore (1974) at 6 p.m.
Prime time lineup: The prime time lineup includes the backstage drama, All About Eve at 8 p.m., which was the 1950 best picture winner, followed by 1951's honoree, An American in Paris at 10:30 p.m.

Three daytime picks: Start off your Groundhog Day with Rosalind Russell as eccentric heiress Auntie Mame (1958) at 9:30 a.m., then begin the B's with teenager Shirley Temple falling for playboy Cary Grant in The Bachelor and the Bobby-Soxer (1947) at 2 p.m. Finally, watch unscrupulous movie producer Kirk Douglas steamroll over everyone around him in the Hollywood drama, The Bad and the Beautiful (1952) at 6 p.m.
Primetime lineup: The prime time lineup features two backstage dramas that start with B. First up is Fred Astaire playing a washed-up movie star who gets a second chance on Broadway in the musical, The Band Wagon (1953) at 8 p.m. followed by Humphrey Bogart making dancer Ava Gardner into a star in The Barefoot Contessa (1954) at 10 p.m.
Late Night Pick: The World War II movie, Battleground (1947) at 5:45 a.m., finds a group of ordinary soldiers trying to survive the Nazi onslaught and the freezing weather during the Battle of the Bulge.

Three daytime picks: Start off your day with the best picture winning Biblical epic Ben-Hur (1959) at 7:45 a.m., followed by the powerful drama about soldiers returning home after World War II, The Best Years of Our Lives (1946) at 11:30 a.m. Finally, Kirk Douglas plays a 19th century trapper who leads an expedition up the Missouri River in The Big Sky (1952) at 5:30 p.m.
Prime time lineup: The prime time lineup starts with one of director Alfred Hitchcock's most popular thrillers, The Birds (1963) at 8 p.m. followed by Mel Brooks hilarious Western spoof Blazing Saddles (1974) at 10:30 p.m.
Late night pick:  Warren Beatty and Faye Dunaway play the legendary bank robbers in Bonnie and Clyde (1967) at 4:15 p.m.

Three daytime picks: Start off the C's with Doris Day belting out the Oscar-winning song "Secret Love" in Calamity Jane (1953) at 8:45 a.m. followed by Greta Garbo's beautiful performance as a 19th century courtesan in Camille (1936) at 1:45 p.m. Spencer Tracy won his first Oscar for playing a Portuguese fisherman in Captains Courageous (1937) at 6 p.m.
Primetime lineup: The prime time line up starts out with best picture winner Casablanca (1943) at 8 p.m. followed by Paul Newman and Elizabeth Taylor in the Tennessee Williams adaptation Cat on a Hot Tin Roof (1958) at 10 p.m.
Late night pick: Sissy Spacek won an Oscar for playing country music singer Loretta Lynn in Coal Miner's Daughter (1980) at 2:30 a.m.