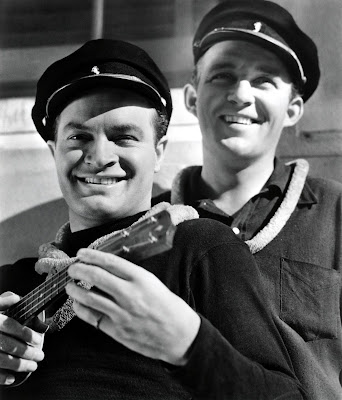 This week, TCM is airing three of the Road movies starring Bob Hope and Bing Crosby.

This week, TCM is airing great movies from stars like Ray Milland, Jane Wyman, and Loretta Young. Plus, they are putting the spotlight on prison films and showing a night of movies based on the works of John Steinbeck. So, without further ado, let's jump right in to this week's offerings. Just a note: All times are Eastern Standard Time and the highlighted texts have links to full length articles.

Silent Sunday Nights: Three movies starring Wallace Beery. The actor has a small role as the manager of a vaudeville company in the Ben Turpin short, A Clever Dummy (1917) at midnight, while he plays Gloria Swanson's nefarious guardian in Teddy at the Throttle (1917) at 12:15 a.m. Beery plays the villainous Magua in the 1920 adaptation of The Last of the Mohicans at 12:45 a.m.

Three daytime picks: The theme is hypnosis starting with Basil Rathbone and Nigel Bruce on the case of a man (Paul Cavanagh) who has been hypnotized into believing he is a serial killer in Sherlock Holmes and the Woman in Green (1945) at 6:15 a.m. followed by one of John Barrymore's campiest performances as the mesmeric manager of a young singer (Marian Marsh) in Svengali (1931) at 1:30 p.m. The bizarro Orson Welles film Black Magic (1949) at 6 p.m. finds the actor as a hypnotist/con artist named Count Cagliostro.
Prime time lineup: The evening lineup features film adaptations of the works of American novelist John Steinbeck starting with his saga of inter-generational conflict in a California family in East of Eden (1955) at 8 p.m. followed by the author's tale of Norwegian resistance to Nazi occupation in The Moon Is Down (1943) at 10:15 p.m.
Late night pick: Director John Ford's adaptation of Steinbeck's Pulitzer Prize-winning novel The Grapes of Wrath (1940) is on at 2:15 a.m.

Three daytime picks: A birthday tribute to Ray Milland who was born Alfred Jones on Jan. 3, 1907, in Neath, Wales. Milland got his start playing aristocratic boyfriends in movies like the musical Irene (1940) at 3:45 p.m. but he proved his sizable acting chops in his Academy Award-winning performance as a writer on an alcoholic bender in The Lost Weekend (1945) at 12:15 p.m. Milland played several villains in his later career, including for director Alfred Hitchock in Dial M for Murder (1954) at 5:30 p.m.
Prime time lineup: TCM is featuring films about prison each Tuesday in January. This week's lineup starts with Paul Newman as a convict who defies the authority of a brutal chain-gang boss in Cool Hand Luke (1967) at 8 p.m. followed by the great noir Brute Force (1947) at 10:15 p.m. in which Burt Lancaster leads a revolt against a sadistic prison guard (a never-better Hume Cronyn).
Late night pick: The seminal prison film, The Last Mile (1932) at 3:15 a.m., follows a group of inmates on death row.

Three daytime picks: The lineup features movies from director Rowland V. Lee starting with the best version of the often-filmed The Count of Monte Cristo (1934) at 7:45 a.m., which stars Robert Donat as a man seeking revenge for an unjust imprisonment. Lee also directed a sequel, The Son of Monte Cristo (1941) at 3:15 p.m.  The Toast of New York (1937) at 11:45 a.m. is a rollicking biopic about two 19th century robber barons (Edward Arnold and Cary Grant) that is notable for a great supporting performance from Frances Farmer.
Prime time lineup: The theme is movies from actor-director-screenwriter-producer Warren Beatty starting with his remake of Here Comes Mr. Jordan (1941), Heaven Can Wait (1978) at 8 p.m. Beatty was also a quadruple threat in  Reds (1981) at 10 p.m. his Oscar-winning biopic about two Americans caught up in the Russian Revolution.

Three daytime picks: The theme is war movies starting with Lee Marvin leading The Dirty Dozen (1967) at 7 a.m. followed by Gary Cooper playing a Tennessee backwoodsman turned World War I hero in Sergeant York (1941) at 12:15 a.m. Finally, director Andrew Marton and an all-star cast recreate the Allied invasion of Normandy in The Longest Day (1962) at 2:30 p.m.
Primetime lineup: TCM is devoting every Thursday in January to star-of-the-month Jane Wyman. Tonight's lineup focuses on her early movies starting with the comedy Public Wedding (1937) at 8 p.m. which finds Wyman as a grifter who stages a fake wedding to get some fast cash followed by her role as sleuthing newshound Torchy Blane (she took over for Glenda Farrell) in Torchy Plays with Dynamite (1939) at 9:15 p.m. Wyman met her future husband Ronald Reagan on the set of Brother Rat (1938) at 10:30 p.m., a comedy about cadets at the Virginia Military Institute.
Late Night Pick: Wyman plays the secretary to a gaming kingpin (Gilbert Roland) in Gambling on the High Seas (1940) at 4:45 a.m.

Three daytime picks: A birthday tribute to Loretta Young, who was born Gretchen Young on Jan 6, 1913, in Salt Lake City. Rachel and the Stranger (1948) finds Young as a frustrated pioneer wife who finds herself attracted to a handsome neighbor (Robert Mitchum). In The Life of Jimmy Dolan (1933) at 5:15 p.m. she plays the caretaker of a home for crippled children who takes in boxer-on-the-lam Douglas Fairbanks, Jr. James Cagney and Young make a sensational team in the pre-code gangster saga Taxi! (1932) at 6:45 p.m.
Prime time lineup: The theme is movies starring Vanessa Redgrave starting with her small role as a kidnap victim in the Sherlock Holmes mystery, The Seven-Per-Cent Solution (1976) at 8 p.m. followed by Redgrave's performance as famed crime writer Agatha Christie in Agatha (1979) at 10 p.m.
Late night pick:  Redgrave won an Oscar for her performance as the title character in Julia (1977) at midnight about author Lillian Hellman's friendship with an anti-Nazi fighter.