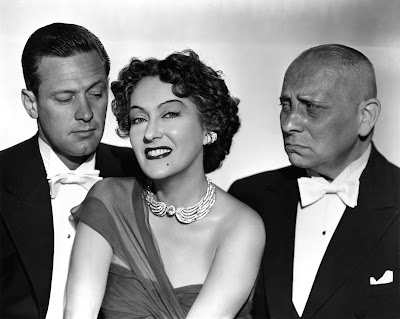 Sunset Boulevard (1950), starring William Holden, Gloria Swanson, and Erich von Stroheim, is one of the 1001 classic movies you should see.

Each Monday, I'm going to recommend a classic movie you should see (for the reasons behind the 1001 series and reviews of earlier films covered go here). January's theme is movies about Hollywood. Today's selection is writer and director Billy Wilder's dark satire, Sunset Boulevard (1950).


Sunset Boulevard tells the story of Joe Gillis (William Holden) a broke screenwriter who, while hiding his car from creditors in what he thinks is an empty garage, stumbles upon the dilapidated mansion of faded silent film star, Norma Desmond (Gloria Swanson). Soon, Norma hires Joe to help her write the script for her long-planned comeback movie, and eventually the lonely actress develops romantic feelings for the handsome screenwriter despite the fact that he is sweet on a young woman (Nancy Olson) who works as a script reader at Paramount Pictures. 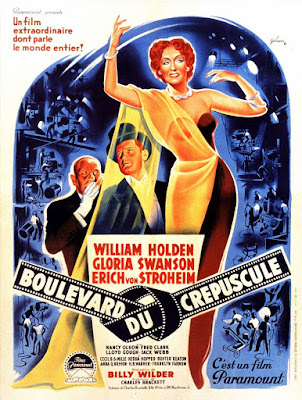 The idea for Sunset Boulevard first occurred to Wilder in the 1930s when he was a young screenwriter who used to walk to work past the lavish mansions of twenties movie stars. Wilder and his writing partner Charles Brackett came up with an idea for a comedy about a silent star who makes a comeback, but they couldn't make the idea work until their bridge partner, reporter D.M. Marshman, Jr., suggested that the older actress get involved with a younger man. The result was a darkly funny take on old Hollywood that enraged many within the film industry -- MGM chief Louis B. Mayer screamed at Wilder during a preview screening -- but nevertheless enthralled audiences and has since become one of the best known films in American cinema.

Sunset Boulevard and last week's selection, Singin' in the Rain (1952), are both great movies, but they do give a somewhat skewed view of the fate of silent movie stars. While there were certainly more than a few oddballs in teens and twenties Hollywood, most former stars didn't shut themselves away in their decaying mansions while plotting their big comebacks. Instead, some continued to work in Hollywood -- Laurel and Hardy are a good example of silent movie stars who became even bigger stars in the sound era -- or found other things to occupy their time. For example, Swanson was a savvy businesswoman who dabbled in fashion and health food (she was one of the first to sing the praises of kale) and enjoyed spending time with her seven grandchildren.

Sunset Boulevard Viewer's Guide: This movie is the best in Wilder's long and distinguished filmography. Here's what to look for when you watch:

1. Movies within a movie. In two scenes, Sunset Boulevard is a movie within a movie. The film Joe and Norma watch on her home movie theater is Queen Kelly (1929), an epic starring Swanson and directed by Erich von Stroheim, who plays director-turned-valet Max von Mayerling in Sunset Boulevard. When Norma visits director Cecil B. DeMille at Paramount studios, he is making the Biblical epic Samson and Delilah (1949).
2. Los Angeles. Sunset Boulevard is also a movie about living in Southern California, and there are many real life locations in the film including the famous front entrance to Paramount, Hollywood hangout Schwab's Pharmacy (an exact replica was built on the Paramount set), and the Alto Nido Apartments on North Ivar Street.
3. Holden. Holden was a lowly contract player at Paramount when he lucked into the role of Joe Gillis because both Montgomery Clift and Fred MacMurray turned it down. He gives a career-best performance as Joe, making what could have been an unlikable or weak character into a new kind of romantic hero.
4 Dialogue. Sunset Boulevard may be the most quotable movie of all time. Memorable lines include "I am big! It's the pictures that got small," "All right, Mr. DeMille, I'm ready for my closeup," and my personal favorite, Norma's declaration that "I'm going to be bigger than peanut butter."

Other critics: Sunset Boulevard has a 98 percent fresh rating at Rotten Tomatoes and Leonard Maltin writes that it is "bitter, funny, fascinating" and "Gloria's tour de force" in a four star review for his Classic Movie Guide. Critics in 1950 were somewhat mixed about the movie's appeal. While the critic for The Hollywood Reporter recognized the movie's lasting appeal, accurately predicting that future generations would "set themselves the task of analyzing the. . .greatness of the film" other critics dismissed Sunset Boulevard. The New Yorker felt it was cheesy, or as they put it, "a pretentious slice of Rocquefort," and The New York Times' Thomas Pryor felt the clever opening scene was a corny plot device.

The bottom line: Sunset Boulevard is not only the best old Hollywood movie about old Hollywood, it is one of the best movies ever made in old Hollywood period. Watch it for the great performances, especially from Holden and Swanson, and Wilder and Brackett's sharp dialogue.

Availability: Sunset Boulevard is available for streaming on Netflix Instant. It is also available on DVD, Blu-ray, and video on demand.

Next week, I'll continue the theme of Hollywood on Hollywood with writer and director Preston Sturges' comedy, Sullivan's Travels (1942).