She Wore a Yellow Ribbon 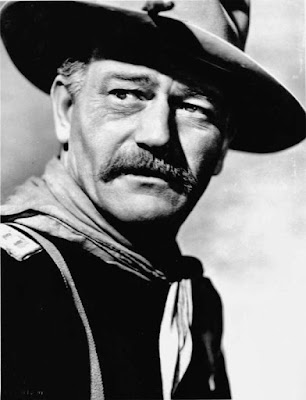 This article is part of The John Wayne Blogathon hosted by The Midnite Drive-In and Hamlette's Soliloquy.

By 1949, John Wayne was one of old Hollywood's biggest moneymakers, but in director John Ford's elegiac Western, She Wore a Yellow Ribbon, he proved that he was also a sensitive actor of some distinction.

She Wore a Yellow Ribbon begins when U.S. Cavalry Capt. Nathan Brittles is just a few days away from retirement. Before the widower can leave for a new life in California, he and his troop must deal with several Cheyenne and Arapaho warriors who have left the reservation after hearing news of the defeat of Gen. George Armstrong Custer at the Battle of the Little Big Horn. Brittles' mission is complicated by the fact that he must escort his commanding officer's wife (Mildred Natwick) and niece (Joanne Dru) to a stagecoach heading back east. 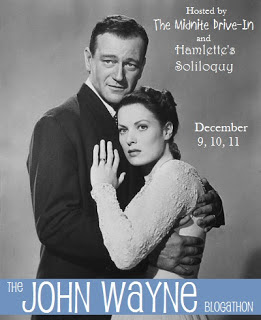 Ford cast many of his familiar stock company in She Wore a Yellow Ribbon, which, like many of the director's Westerns, was filmed on location in Monument Valley along the Arizona-Utah border. In addition to McLaglen, Agar, and Carey, there is Arthur Shields as the flustered troop doctor, George O'Brien as Brittles' commanding officer, and former rodeo cowboy Ben Johnson as a laconic scout, who drawls, "Well, sir, that's not in my department" whenever Brittles asks him a leading question. 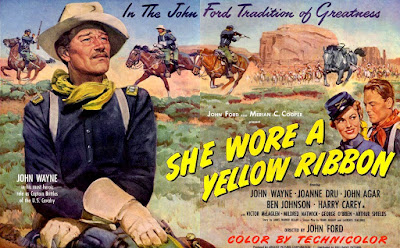 Despite the fact that Ford and Wayne had already worked together several times -- he essentially plays a younger version of the Brittles character in  Fort Apache -- the director was reluctant to cast his favorite leading man in She Wore a Yellow Ribbon. Ford felt that the 42-year-old Wayne was much too young to play the 60-something Brittles. He briefly considered Charles Bickford for the part, but, after watching Wayne's searing performance as a rage-filled patriarch in director Howard Hawks' Red River (1948), he changed his mind (Ford reportedly remarked, "I didn't know that SOB could act," after a screening).

Viewed today, She Wore a Yellow Ribbon is still one of the finest Ford-Wayne collaborations. It is the only cavalry trilogy film in Technicolor, and Ford and cinematographer Winton Hoch create beautiful vistas based on the works of artist Frederic Remington (Hoch won the 1949 Academy Award for best color cinematography).

However, the best part of She Wore a Yellow Ribbon is Wayne's sensitive lead performance. Brittles has all of the masculine strength that is associated with Wayne's screen persona -- His catchphrase is "Never apologize. It's a sign of weakness" -- but he is also, for lack of a better word, a mensch. Brittles is a person of unbending integrity, who is equally at home commanding a troop in harrowing situations and tenderly caring for the graves of his wife and two young daughters. Brittles also frequently wells up during emotional moments, such as when he receives a watch as a retirement present (clip below).

In many ways, She Wore a Yellow Ribbon is an elegy for men like Nathan Brittles who, unlike the younger cavalry officers played by Agar and Carey, did their duty with quiet self-effacement. There is a potent scene in the middle of the film where the cavalry troop stumbles across one of the few herds of buffalo left in the West. It's a great visual scene in the movie, but it is also symbolic. Like the buffalo, Brittles is having one last moment of glory before vanishing forever from the American West.

She Wore a Yellow Ribbon will air at 4:15 a.m. Feb. 23 on TCM. Also available for streaming for DirecTV subscribers, on DVD, Blu-ray, and video on demand.