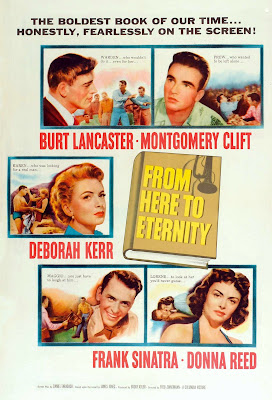 From Here to Eternity (1953) is one of the classic movies airing on TCM this week.


This week, TCM is airing great movies from stars like Agnes Moorehead, Judy Davis, and Myrna Loy. Plus, they are commemorating the 75th anniversary of the Pearl Harbor attacks and featuring a night movies with stop-motion animation. So, without further ado, let's jump right in to this week's offerings. Just a note: All times are Eastern Standard Time and the highlighted texts have links to full length articles.

Holiday viewing: The Christmas Eve comedy, Period of Adjustment (1962), is airing at 10:45 p.m. Thursday, and there's a lineup of Christmas movies on Sunday daytime starting with Alias Boston Blackie (1942) at 6 a.m.

Silent Sunday Nights: Director Carl Theodor Dreyer's masterpiece The Passion of Joan of Arc (1928) at 12:45 a.m. is one of the groundbreaking films of silent cinema.

Best Day to DVR:  All day Wednesday. TCM is commemorating the Japanese attacks on the U.S. Naval base in Pearl Harbor, Hawaii, with a day of World War II dramas, including From Here to Eternity (1953), They Were Expendable (1945), and Tora! Tora! Tora! (1970). 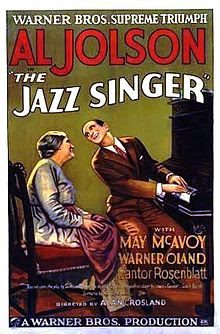 Three daytime picks: The theme is a 24-hour celebration for the 90th anniversary of Vitaphone, a sound film system that was invented by Bell Telephone Laboratories and Western Electric. Vitaphone pioneered symphonic scores for silent films such as the music hall comedy The Better 'Ole (1926) at 8 a.m. and the technology was used for the first sound film, The Jazz Singer (1929) at 6 p.m. However Vitaphone was most widely known for its series of shorts that featured celebrities like baseball player Babe Ruth in Home Run on the Keys (1936) at 3:45 p.m.
Prime time lineup: The Vitaphone tribute continue in prime time with shorts from famous Vaudeville acts like The Dick Van Dyke Show alum Rose Marie, who began her career as a child performer in shorts like Baby Rose Marie the Child Wonder (1929) at 8 p.m. The comic duo of George Burns and Gracie Allen perform in Lambchops (1929) at 9:45 p.m.
Late night pick: The Alice White vehicle, Show Girl in Hollywood (1930) at 1:45 a.m., was an early Vitaphone musical.

Three daytime picks: A birthday tribute to Agnes Moorehead who was born Dec. 6, 1900, in Clinton, Mass. She was a character actress of great range, but she often played formidable types in movies like Johnny Belinda (1948) at 9:45 a.m. where she plays the bitter aunt of a young deaf-mute woman (Jane Wyman). Moorehead has a lot of fun as a snooty queen mother in Grace Kelly's royal drama, The Swan (1956) at 11:45 a.m. Moorehead plays another aristocratic role, this time as a French baroness, in the Greer Garson-Walter Pidgeon romance Mrs. Parkington (1944) at 5:45 p.m.
Prime time lineup: TCM is featuring films about elderly people each Tuesday in December. This week's lineup begins with the poignant Make Way for Tomorrow (1937) at 8 p.m., which finds Victor Moore and Beulah Bondi as a devoted couple who must separate during the Great Depression. The Trip to Bountiful (1985) at 9:45 p.m. features Geraldine Page in an Academy Award winning performance as a woman who wants to return to her Texas hometown.
Late night pick: Director Yasujiro Ozu's sensitive Tokyo Story (1953) at 1:30 a.m. is a retelling of Make Way for Tomorrow in postwar Japan.

Three daytime picks: The theme is a commemoration of the 75th anniversary of the attacks at Pearl Harbor. First up is Thirty Seconds Over Tokyo (1944) at 11:30 a.m., which follows the Air Corps crew that led the first air raids against Japan followed by the multiple Oscar winner From Here to Eternity (1953) at 2 p.m. about the lives and loves of those at the Pearl Harbor naval base. Finally, They Were Expendable (1945) at 4 p.m. follows the fate of a PT boat crew stationed in The Philippines after the attack.
Prime time lineup: The movies about Pearl Harbor continue with Tora! Tora! Tora! (1970) at 8 p.m., which is an historical recreation of the attacks from both the American and Japanese perspective. Air Force (1943) at 10:45 p.m. tells the true story of a B-17 bomber crew that unknowingly flew right into the middle of the Japanese air raids on December 7.

Late Night Pick: The TCM premiere of The Revolt of Mamie Stover (1956) at 1 a.m. finds Jane Russell as a shady lady who arrives in Honolulu just before the attacks.

Three daytime picks: TCM is devoting all of Friday to star of the month Myrna Loy. This week features many of her pre-code movies starting with the Alice White musical The Naughty Flirt (1931) at 10 a.m. in which Loy plays a fortune hunter who comes between Alice and her man (Paul Page). Loy was saddled with a lot of Asian roles early in her career. One of the most memorable was as the dastardly villain Fu Manchu's man-hungry daughter in The Mask of Fu Manchu (1932) at 2 p.m. The Wet Parade (1932) at 6 p.m. is an intriguing socially conscious drama about alcohol  and prohibition that features a peroxide-blonde Loy as a speakeasy hostess.
Prime time lineup: Two of Loy's best pre-code movies were the Maurice Chevalier-Jeanette MacDonald musical Love Me Tonight (1932) at 8 p.m. (once again she plays the other woman), and The Prizefighter and the Lady (1933) at 9:15 p.m., in which Loy finally gets a sympathetic role as a nightclub singer who falls for boxer Max Baer.
Late night pick: Loy plays a mobbed-up call girl who helps Warner Baxter solve a murder in Penthouse (1933) at 2:45 a.m.

The prime time line up is all about stop-motion animation starting with the grandaddy (and still the best) of all animatronic monsters King Kong (1933) at 8 p.m. Visual effects master Ray Harryhausen created the stop-motion animation for both the Greek mythology tale, Clash of the Titans (1981) at 10 p.m. and the prehistoric adventure, One Million Years B.C. (1966) at 12:15 a.m.

The Sunday Night Feature will put the spotlight on two films starring Australian actress Judy Davis starting with director David Lean's drama about the British Raj in the 1920s, A Passage to India (1984) at 8 p.m. Davis plays a 19th century woman who must choose between marriage to Sam Neill and writing in My Brilliant Career (1979) at 11 p.m.