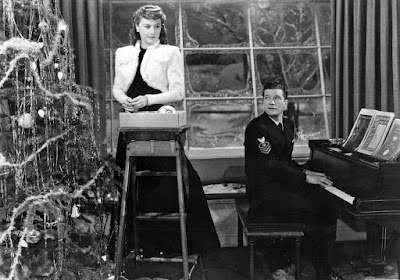 Christmas in Connecticut (1945) starring Barbara Stanwyck and Dennis Morgan is one of the 1001 classic movies you should see.

Each Monday, I'm going to recommend a classic movie you should see (for the reasons behind the 1001 series and reviews of earlier films covered go here). December's theme is Christmas movies starring Barbara Stanwyck. This week's selection is the perennial holiday favorite, Christmas in Connecticut (1945).


Christmas in Connecticut tells the story of Elizabeth Lane (Stanwyck), a popular lifestyle columnist for Smart Housekeeping magazine. She claims to write her column every month  from her idyllic Connecticut farmhouse where she lives with her doting husband, adorable baby and an assortment of cuddly farm animals. Lane is so well-known that her publisher (Sydney Greenstreet) is bringing a wounded sailor (Dennis Morgan) to her farmhouse for Christmas dinner.

The problem is nothing Elizabeth writes is true. She doesn't have a husband, let alone an adorable baby. She lives in a cramped New York apartment, not a Connecticut manse, and all of her mouth-watering recipes come from her Uncle Felix (S.Z. Sakall), who owns a Hungarian restaurant. Lane doesn't want to blow her cover so she comes up with a desperate scheme: She will marry an architect friend (Reginald Gardiner) over the Christmas holiday and pass off his immaculate farmhouse and Uncle Felix's haute cuisine as her own. 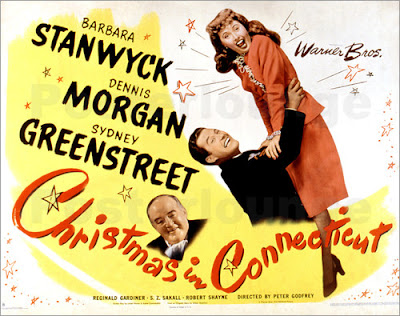 Christmas in Connecticut is based on an original story by Aileen Hamilton that was  slated for Bette Davis and John Alexander, but eventually landed in the lap of Warner's contract player Morgan and Stanwyck, who was looking for a lighter role after completing her Academy Award nominated performance in Double Indemnity (1944). The cast and crew had a wonderful time making the movie with director Peter Godfrey and Greenstreet, who had worked together on the London stage, entertaining everyone between takes. The result is a funny and fast film that has become an annual holiday treat for many classic movie fans.

Christmas in Connecticut was one of the first movies out of the gate in the postwar holiday movie boom. Old Hollywood studios didn't exactly ignore Christmas before 1945, but they usually incorporated Yuletide scenes into movies about other subjects (last week's selection, Meet John Doe (1941), is a good example of this). During the dark days of World War II, Americans embraced Christmas like never before. Songs like "White Christmas" and "I'll Be Home for Christmas" became a part of the pop culture lexicon, and Hollywood followed suit by churning out a string of now-classic holiday movies in the late 1940s (It's A Wonderful Life, Miracle on 34th Street, It Happened on 5th Avenue) that included Christmas in Connecticut.

Christmas in Connecticut Viewer's Guide: This movie is both an intricate, ahead-of-its-time farce and a heartwarming holiday treat. Here's what to look for when you watch:

1. Smart Housekeeping. Today, it seems like every other celebrity has some type of lifestyle brand, but Elizabeth Lane's "Diary of a Housewife" column wasn't so common in 1945. Elizabeth's made-up musings about her picturesque Connecticut manse and her gourmet meals anticipated the likes of Martha Stewart by 40 years.
2. Hallmark movies. Christmas in Connecticut is also a forerunner of the type of holiday rom-coms that have become a staple on TV channels like Hallmark and Lifetime. There's a spunky, independent heroine who has two men competing for her affections, immaculate interior decorating, and lots and lots of fake snow.
3. Character actors. Warner Bros. had the best stable of character actors in old Hollywood, and it shows in Christmas in Connecticut. There are several great performances from classic movie favorites, including Gardiner, who plays Elizabeth's fussy fiance (he likes to talk about plumbing during romantic moments), and Greenstreet, who manages to be both funny and imposing as Elizabeth's publisher. However, top honors go to the adorable Sakall, whose excitable demeanor and mangled English are the movie's highlights.
4 The dance scene. The square dance scene is a delight to watch with both Greenstreet and Gardiner unexpectedly pulling off sweet dance moves (at one point Stanwyck doubles over in real laughter when Gardiner literally kicks up his heels).

Other critics: Christmas in Connecticut has an 88 percent fresh rating at Rotten Tomatoes and Leonard Maltin writes that  "standard studio corn it may be, but a wonderful treat for late-night viewing on Christmas Eve" in a two and 1\2 star review for his Classic Movie Guide. Critics in 1945 mostly didn't like the movie. The New York Times' Bosley Crowther panned the movie for having too many risque jokes -- the old-fashioned Crowther was appalled by the baby bath scene -- and he complained that Stanwyck was miscast and that Sakall's accent was "getting heavier with each picture."

The bottom line: Ignore the critics and grab a bowl of popcorn for a delightful holiday treat that will leave you smiling from ear to ear.

Availability: Christmas in Connecticut will air at 8 p.m. Dec. 24 on TCM. Also available on DVD, Blu-ray, and video on demand.