James Cagney and Pat O'Brien in Angels with Dirty Faces 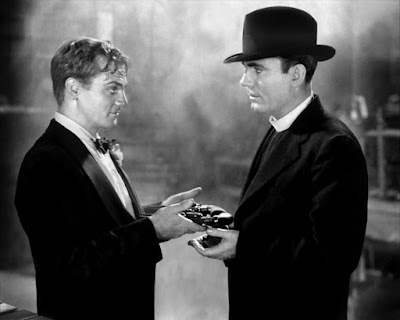 This article is part of the You Gotta Have Friends Blogathon hosted by Moon in Gemini.

A gentle reminder that this article contains spoilers for a 78-year-old film.

The phrase "friends 'til the end" takes on a whole new meaning in the 1938 gangster film, Angels with Dirty Faces. The movie, which stars real-life pals James Cagney and Pat O'Brien, follows lifelong  friends Rocky Sullivan (Cagney) and Jerry Conolly (O'Brien) from their poverty-stricken childhood to a final confrontation on death row that is one of the most memorable scenes in American cinema.

Angels with Dirty Faces begins in the 1920's when Rocky and Jerry are teenagers (ably played by Frankie Burke and William Tracy) growing up on the mean streets of New York City's Lower East Side. The boys attempt to steal some fountain pens leads to two very different fates for the two young men: Rocky, who is caught by police, becomes a notorious gangster after several bouts of reform school and prison, while Jerry, who manages to elude the cops, becomes a Catholic priest who dedicates his life to helping young people in his old stomping grounds. 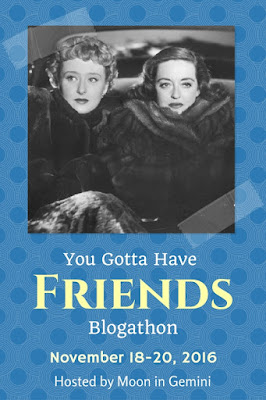 Angels with Dirty Faces was the second movie Cagney made with Warner Bros. after returning from a two-year walkout (Cagney, who worked for the lowly Grand National Pictures in the interim, was protesting what he saw as low pay and unfair working conditions). Cagney brought Rowland Brown's original story for Angels with Dirty Faces from Grand National to Warner's where it was immediately turned into a screenplay by John Wexley and Warren Duff.  Despite repeated warnings from movies censors about the script's glorification of violence, studio chief Jack Warner saw the film as a way to get maximum box-office profits by pairing the proven screen team of Cagney and O'Brien with new sensations the Dead End Kids.

The result was a box-office smash and critical success that earned Cagney an Academy Award nomination and a nod from the New York Film Critics Circle as the best actor of 1938. Viewed today, Angels with Dirty Faces is both the best screen pairing of old pals Cagney and O'Brien, and a fascinating film about the nature of friendship.

Angels with Dirty Faces was the sixth of nine films made by the two Irish-American stars, who first met in the 1920s when both were starring on the stage in New York City. Cagney and O'Brien became Warner's stars in the early 1930s, and the studio frequently paired the two actors in light comedies like The Irish in Us (1935)  and action-adventure spectacles like Devil Dogs of the Air (1935) before teaming them up with director Michael Curtiz for their first gangster movie together.

Cagney made his name as a gangster in pre-code movies like The Public Enemy (1931), but by 1938 crime films had fallen out of favor mostly because of the strict moral guidelines of the Motion Picture Production Code. O'Brien's role as the saintly Father Jerry helped the movie gain approval from the Catholic-dominated movie censorship board, but, more importantly, it emphasized the stark contrast between the two men for movie audiences. 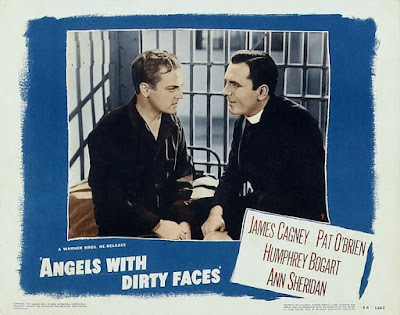 O'Brien's calm, kindly demeanor -- he serenely glides around the parish while bathed in heavenly light -- serves as a striking contrast with Cagney's instinctive wildness as Rocky. The differences between the two men are emphasized in their first scene together. They are reminiscing about old times when Jerry reveals that he decided to become a priest while looking at a cathedral from the top of bus. Rocky replies, "I had an idea on the top of bus once. It got me six years [in jail]."

The rapport between the two men is evident throughout Angels with Dirty Faces whether Jerry is affectionately watching Rocky run roughshod over the Dead End Kids -- O'Brien just smiles away even while Cagney is literally punching Leo Gorcey in the face -- or Jerry is talking Rocky out of  a deadly standoff with police. However, their best moments onscreen are the final, harrowing scenes of the movie. Rocky has been sentenced to die in the electric chair for killing a police officer, when Jerry comes to visit his friend to make one final request (clip below).


Cagney and O'Brien made two more films together for Warner's: the World War I drama, The Fighting 69th (1940), and the tropical adventure, Torrid Zone (1940). They reunited in 1981 for the historical epic Ragtime, which was the last film for both men. I'll leave you with a clip of the two men being interviewed on British television. Cagney relates a funny story about Angels with Dirty Faces.


Angels with Dirty Faces is available on DVD.