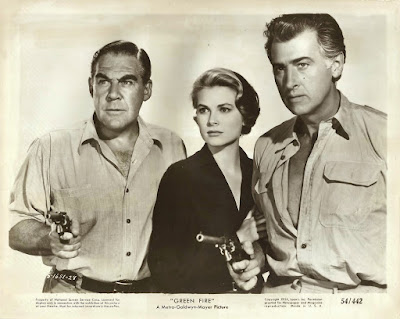 This article is part of The Second Wonderful Grace Kelly Blogathon hosted by The Wonderful World of Cinema.

You'll never look at emerald jewelry the same way again after watching the rousing action-adventure film, Green Fire (1954), which stars Grace Kelly as a coffee plantation owner who gets mixed up in the quest for priceless jewels.

Green Fire begins when fortune hunter Rian Mitchell (Stewart Granger) discovers a centuries old emerald mine in the jungles of Colombia. Rian and his partner Vic Leonard (Paul Douglas) are convinced that they can earn a fortune by digging the emeralds out of the mountain, but, even as Rian begins a relationship with the beautiful Catherine Knowland (Kelly), he and Vic encounter obstacles from mother nature and local bandits. 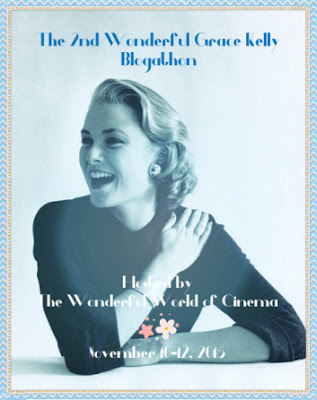 Green Fire is based on the memoirs of Major Peter W. Rainier about his work at El Chivor Emerald Mine in Colombia in the 1930s (El Chivor emeralds are still among the most prized in the world. You can take a look at some of the stones here). MGM bought the rights to Rainier's book in the 1940s as a vehicle for Clark Gable and Ava Gardner, but, for one reason or another, a script was never actually written until 1952.

By that time there were two new leads -- MGM capitalized on the popularity of both Granger and Kelly by casting them together for the first and only time -- and a new producer in Armand Deutsch. He and director Andrew Marton wanted to use the new Cinemascope photography to its best effect so they decided to film the movie on location in Colombia. In April 1954, Kelly and the rest of the cast and crew headed out to a rural area near the capital of Bogota to make the movie. In his autobiography, Granger remembered the shoot as an unpleasant experience, writing that "everything was dusty, dirty, and swarming with flies and God knows why we were there because I didn't see any emerald mines."

For Kelly, Green Fire came at an extremely busy time in her career. The shooting was sandwiched between Kelly's Academy Award-winning role in The Country Girl (1954) and To Catch a Thief (1955), her third and final film with director Alfred Hitchcock. In fact, Kelly's schedule was so hectic that she later remembered completing Green Fire in the morning and then rushing to catch a flight to the French Riviera in the afternoon.

Today, Green Fire has a somewhat unique place in Kelly's filmography. It's not one of her better remembered films, and in truth, the movie is a fluffy action spectacle that requires very little from Kelly other than to look beautiful in costume designer Helen Rose's gorgeous creations. Despite that, Green Fire is very entertaining escapist fare that is best described by film critic and historian Leonard Maltin in his Classic Movie Guide as having "attractive stars, hot love scenes, [and a] slimy villain (Murvyn Vye)."

Colombia's lush flora and fauna look beautiful in Green Fire, and Granger, with his Indiana Jones ensemble, perma-tan, and manly swagger, makes a creditable action hero, but Green Fire is most memorable for Miklos Rosza's dazzling score and the many special effects set pieces devised by Marton. There is a rock slide, flood, and the dynamiting of an entire mountain, not to mention one of the best "let's kiss in the rain" finales in old Hollywood films. I'll leave you with the movie's memorable theme song with music from Rosza and lyrics by Jack Brooks.


Green Fire is available on DVD and video on demand.