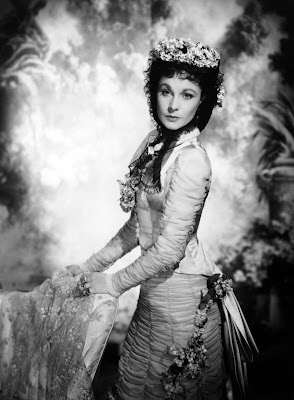 This article is part of The Second Vivien Leigh and Laurence Olivier Blogathon hosted by Wolffian Classics Movies Digest.

There are dozens of screen versions of Leo Tolstoy's epic novel, Anna Karenina, but my personal favorite is director Julien Duvivier's 1948 version, which stars Vivien Leigh as the tragic heroine.

Anna Karenina begins when the title character meet a handsome, young army officer, Count Vronsky (Kieron Moore), while traveling by train to Moscow. Although Anna is married to an important government official (Ralph Richardson) and has a young son (Patrick Skipwith) she adores, she embarks on a love affair with Count Vronksy that makes her an outcast in Russian society. 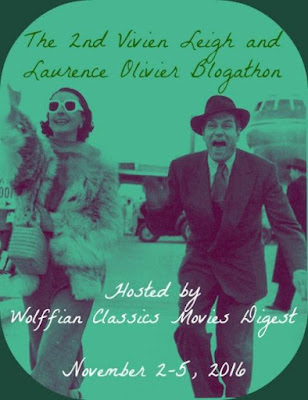 After World War II,  producer Alexander Korda wanted to revive his career in the British film industry by releasing several lavish screen spectacles. Korda's plans included another movie version of Anna Karenina -- Tolstoy's novel had already been made into a successful 1935 MGM film with Greta Garbo, Fredric March, and Basil Rathbone in the lead roles -- that would star real life couple, Leigh and Laurence Olivier. However, Olivier had zero interest in the project because he was immersed in directing and starring in his Academy Award winning screen version of Hamlet (1948), so the role of Count Vronsky went to Michael Redgrave. Irish actor Kieron Moore took over the part after Redgrave withdrew to appear opposite Rosalind Russell in Mourning Becomes Electra (1947).

The result was an expensive flop that lost a great deal of money for Korda's British Lion Films and London Films, but Anna Karenina's reputation has steadily increased since 1948 along with that of Duvivier and other postwar Korda productions like The Third Man (1949). The production values are certainly first rate; the lavish sets and gorgeous costumes, especially those designed for Leigh, accurately evoke the splendor of 19th century Russian high society, but the movie is most notable for Duvivier's beautiful direction and the performances of Leigh and Richardson.

It would be impossible to get all of Tolstoy's gargantuan novel into an one hour and 52 minute running time, but Duvivier and screenwriters Jean Alouilh and Guy Morgan do a fine job of summarizing the book. Duvivier, who was already a veteran of French films and Hollywood, brings an assured hand to the director's chair, creating several beautiful set pieces around trains that foreshadow Anna's tragic fate (in Russian literature, if there's a light at the end of the tunnel, it's usually from an oncoming train). 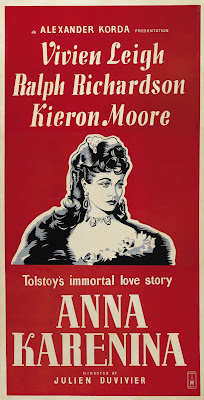 Despite Duvivier's assured direction, Anna Karenina's greatest strength is its cast. While Moore isn't quite up to the task of playing a romantic hero, the rest of the cast is fine, especially Hugh Dempster in a comic turn as Anna's philandering brother and Sally Ann Howes as Anna's rival for Vronsky's affections. The real standout among the supporting cast is Richardson as Anna's cold-hearted husband. Richardson, who was one of the great Shakespearean actors of the 20th century, is even more formidable than he was in his Oscar nominated performance in The Heiress (1949). Anna wants her husband's love and acceptance, but all he can give her is a hypocritical form of forgiveness that he wields like a weapon.

Leigh and Richardson share several emotionally powerful scenes together in what was one of  her best screen performances. She effectively portrays Anna's journey from respected pillar of society to social outcast, and her final moments in the film, as Anna descends into madness, are chilling.

I'll leave you with this video of scenes from Garbo and Leigh's Anna Karenina.


Anna Karenina is available on FilmStruck, the new streaming service from TCM and  The Criterion Collection. It is also available on DVD.