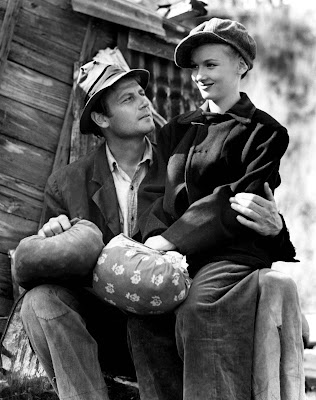 Sullivan's Travels (1941), starring Joel McCrea and Veronica Lake, is one of the classic movies airing on TCM this week.


This week, TCM is airing great movies from stars like Joel McCrea, Claude Rains, and Norman Lloyd. Plus, they are putting the spotlight on documentaries and movies from Noel Coward. So, without further ado, let's jump right in to this week's offerings. Just a note: All times are Eastern Standard Time and the highlighted texts have links to full length articles.

Sunday Prime Time: A lineup of movies from animator Max Fleischer and his director son, Richard.

Silent Sunday Nights: The Russian film, The Battleship Potemkin (1925)  at 12:15 a.m. about a naval mutiny that leads up to the Russian Revolution is one of the undisputed masterpieces of world cinema.

Best Day to DVR: Friday afternoon/evening.  You can start out with a Hitchcock classic (Foreign Correspondent) at 12:45 p.m. and end with a John Ford masterpiece (The Searchers) at 10 p.m. In between are two Preston Sturges comedies (Sullivan's Travels, The Palm Beach Story) a Sam Peckinpah Western (Ride the High Country), and James Dean's best performance (Rebel Without a Cause).

Three daytime picks: The theme is American politics starting with Henry Fonda and Cliff Robertson vying for the White House in the drama The Best Man (1964) at 8:15 a.m. Next, James Stewart fights corruption in the Capitol in the all-time classic Mr. Smith Goes to Washington (1939) at 11:30 a.m. followed by another helping of Fonda, this time as a controversial secretary of state nominee, in Advise & Consent (1962) at 5:30 p.m.
Prime time lineup: TCM is turning the spotlight on documentaries each Monday and Wednesday in November. Tonight's lineup focuses on political documentaries starting with then little-known senator John F. Kennedy's battle to win over Wisconsin voters in Primary (1960) at 8 p.m., followed by a look at controversial Iran-Contra figure Oliver North's ill-starred Senate campaign in A Perfect Candidate (1996) at 9 p.m.
Late night pick: Four Days in November (1964) at 5 a.m. documents the aftermath of Kennedy's assassination.

Three daytime picks: The theme is movies about test pilots starting with (what else?) but Clark Gable and Spencer Tracy in Test Pilot (1938) at 9:15 a.m. followed by aviator brothers George Brent and John Payne battling over Olivia de Havilland in Wings of the Navy (1939) at 11:30 a.m. Finally, William Holden attempts to pioneer supersonic flight in Toward the Unknown (1956) at 6 p.m.
Prime time lineup: TCM is celebrating the 102nd birthday of actor and director Norman Lloyd who was born Norman Perlmutter Nov. 8, 1914, in Jersey City, N.J. The evening starts out at 8 p.m. with TCM host Ben Mankiewicz interviewing Lloyd about his work with legendary figures such as Alfred Hitchcock, Charlie Chaplin, and Orson Welles followed by his villainous turn in Hitchcock's spy thriller Saboteur (1942) at 9:15 p.m.
Late night pick: Lloyd had a small role in Chaplin's bittersweet comedy, Limelight (1952) at 12:30 a.m.

Three daytime picks: The theme is movies about growing up starting with the French drama The 400 Blows (1959) at 8:45 a.m., which may be the greatest coming of age movie ever made. In Love Affair (1939) at 12:15 p.m. playboy Charles Boyer has to grow out of his immature ways in order to win the hand of Irene Dunne, while James Dean and Richard Davalos battle for the affections of their stern father (Raymond Massey) in East of Eden (1955) at 4 p.m.
Prime time lineup: The documentaries continue with a history of the World War II documentaries To Tell the Truth: The Strategy of Truth (2012) at 8 p.m. followed by three short films. Prelude to War (1942) at 9:15 p.m. directed by Frank Capra and Anatole Litvak documents the rise of fascism while the cameo-studded The Autobiography of the Jeep (1943) at 10:15 p.m.  extols the virtues of the humble vehicle. The Negro Soldier (1944) at 10:30 p.m. documents African-American contributions to the war effort.

Late Night Pick: Director John Ford was wounded while shooting combat footage for The Battle of Midway (1942) at 1 a.m.

Three daytime picks: A birthday tribute to Claude Rains who was born William Claude Rains Nov. 10, 1889, in London. Rains was one of old Hollywood's best and most prolific character actors in films like Daughters Courageous (1939) at 9:45 a.m. in which he plays a wandering patriarch who returns to his wife (Fay Bainter) and three adult daughters (the Lane Sisters) after 20 years absence. Rains was also a star of British films like the adaptation of George Bernard Shaw's play Caesar and Cleopatra (1945) at 3 p.m. Rains had one of his most memorable roles in the Universal Pictures horror film, The Invisible Man (1933) at 6:45 p.m.
Primetime lineup: The theme is movies from British director Jack Clayton starting with the quirky drama Our Mother's House (1967) at 8 p.m. about seven siblings who try to carry on alone after their mother's death. Perhaps Clayton's best known film is the psychological horror film, The Innocents (1961) at 10 p.m., about a Victorian governess (Deborah Kerr) who sees dead people.
Late Night Pick: Clayton's marital drama, The Pumpkin Eater (1964) at 12:45 a.m. features Anne Bancroft and Peter Finch as a couple whose relationship status is set on "it's complicated."

Three daytime picks: The theme is movies starring Joel McCrea starting with the horror film The Most Dangerous Game (1932) at 8:45 p.m. McCrea plays an American reporter who gets mixed up in a Nazi plot in director Alfred Hitchcock's thriller, Foreign Correspondent (1940) at 12:45 p.m., followed by two of writer/director Preston Sturges best comedies: the Hollywood expose Sullivan's Travels (1941) at 3 p.m. and the marital farce The Palm Beach Story (1942) at 4:45 p.m.
Prime time lineup: Each Friday in November TCM is celebrating the career of star of the month Natalie Wood. This week's films focus on her fifties movies starting with her iconic performance as a confused young woman in the teen drama Rebel Without a Cause (1955) at 8 p.m. followed by her role as a young girl kidnapped by Comanches in director John Ford's magnificent Western, The Searchers (1956) at 10 p.m.
Late night pick: Wood and Tab Hunter were a popular screen team in movies like The Girl He Left Behind (1956) at 4:15 a.m.

The prime time line up is all about playwright Noel Coward starting with the comedy Blithe Spirit (1980) at 8 p.m. about a writer (Rex Harrison) who is haunted by the ghost of his temperamental first wife (Kay Hammond).  Trevor Howard and Celia Johnson play a married couple who fall for each other in Coward's original screenplay Brief Encounter (1945) at 10 p.m. followed by director Ernst Lubitsch's adaptation of Coward's scandalous comedy Design for Living (1933) at 11:45 p.m.

The Sunday Night Feature will put the spotlight on animator Max Fleischer and his director son, Richard Fleischer, starting with two of Max's best Popeye cartoons Popeye the Sailor Meets Sinbad the Sailor (1936) at 8 p.m. and Popeye the Sailor Meets Ali Baba's Forty Thieves (1937) at 8:30 p.m. Richard made several films noir like the sensational The Narrow Margin (1952) at 9 p.m., but his best-known film is probably the sci-fi classic Soylent Green (1973) at 10:30 p.m.