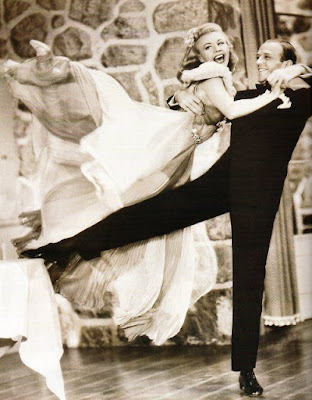 This week, TCM is airing great movies from stars like the Marx Brothers, Eleanor Powell, and Dustin Hoffman. Plus, they are putting the spotlight on documentaries and movies about zany families. So, without further ado, let's jump right in to this week's offerings. Just a note: All times are Eastern Standard Time and the highlighted texts have links to full length articles.

Best Day to DVR: Friday daytime.  TCM is airing seven of the nine musicals Ginger Rogers and Fred Astaire made for RKO pictures in the 1930s.

Three daytime picks: A birthday tribute to Eleanor Powell, who was born Nov. 21, 1912, in Springfield, Mass. Powell's jaw-dropping tap-dancing abilities led her to star in a series of successful MGM musicals in the 1930s like Born to Dance (1936) at 6 a.m. and Broadway Melody of 1938 (1937) at 1:45 p.m. Powell and Fred Astaire's "Begin the Beguine" number in Broadway Melody of 1940 (1940) at 6:15 p.m. is considered one of the best tap-dancing sequences in old Hollywood history.
Prime time lineup: TCM is turning the spotlight on documentaries each Monday and Wednesday in November. Tonight's lineup features two stark films about the struggles of everyday Americans. Harlan County U.S.A. (1976) at 8 p.m. covers a deadly coal miners' strike in rural Kentucky, followed by French director Louis Malle's depiction of struggling Minnesota farmers in God's Country (1985) at 10 p.m.
Late night pick: The Battle of Chile (1975) at 11:45 p.m. chronicles the upheavals in the South American country after the election of Salvador Allende.

Three daytime picks: The morning theme is movie's starring character actor Sam Levene. He was a popular Broadway star in the 1920s and 1930s (he originated the role of Nathan Detroit in Guys and Dolls) until he moved to Hollywood to take supporting parts. He often played police inspectors in movies like the Broadway mystery Grand Central Murder (1942) at 6 a.m. In his later career Levene was a noir regular in movies like Dial 1119 (1950) at 12:30 p.m. where he plays a psychiatrist who tries to reason with an escaped killer (Marshall Thompson). Just in case you were wondering, 1119 was an early version of 911. The afternoon lineup is devoted to George Hamilton, including the tanned one's turn as a green cavalry officer who must confront the Comanches in A Thunder of Drums (1962) at 6 p.m.
Prime time lineup: TCM is celebrating the 100th anniversary of the U.S. National Park Service with a lineup of movies that were filmed in national parks. The Kirk Douglas Western The Big Sky (1952) at 8 p.m., was partially filmed in Yellowstone National Park and Grand Teton National Park. Lucille Ball and Desi Arnaz explore Yosemite National Park's wonders in the comedy The Long, Long Trailer (1954) at 10:30 p.m.
Late night pick: Four Travel Talks shorts that cover the Grand Canyon, Zion Canyon, Yosemite, and Yellowstone begin at 12:15 a.m.

Three daytime picks: The theme is Marx Brothers movies, including three of their best MGM films: At the Circus (1939) at 11:30 a.m., A Day at the Races (1937) at 2:30 p.m., and A Night at the Opera (1935) at 6 p.m.
Prime time lineup: The documentaries continue with movies about science starting with the history of the U.S. space program in For All Mankind (1989) at 8 p.m. followed by Rachel Carson's groundbreaking take on ocean life, The Sea Around Us (1952) at 9:30 p.m. The night wraps up with a slice of Americana in Albert Maysles and David Maysles documentary about the misadventures of four traveling sales people, Salesman (1968) at 10:45 p.m.

Late Night Pick: Director Jean-Pierre Gorin's film Routine Pleasures (1986) at 12:30 a.m. begins as a look at a model train society and ends as a meditation on life and art.

Three daytime picks: TCM is airing movies about families all day on Thanksgiving. You can spend the morning with the Smith family of turn of the century St. Louis in the MGM musical Meet Me in St. Louis (1944) at 8 a.m. followed by a trip to the fifties suburbs with the Banks family in Father of the Bride (1950) at 2 p.m. Finally, follow Doris Day, David Niven, and their brood to rural New York in Please Don't Eat the Daisies (1960) at 6 p.m.
Primetime lineup: The family movies continue with the movie adaptation of the popular family radio show The Life of Riley (1949) at 8 p.m. followed by Rosalind Russell feasting on the banquet of life in the Auntie Mame (1958) at 9:45 p.m.
Late Night Pick: There's no family in old Hollywood quite like the eccentric Sycamores in director Frank Capra's screwball comedy, You Can't Take It with You (1938) at 12:15 a.m.

Three daytime picks: TCM is airing seven of the nine musicals Fred Astaire and Ginger Rogers made for RKO Pictures. All the films make delightful viewing, but don't miss Astaire's solo number, "I Won't Dance," in Roberta (1935) at 6:30 a.m., the romantic, "The Way You Look Tonight," in Swing Time (1936) at 12:30 p.m., and the glamorous "Cheek to Cheek" in Top Hat (1935) at 6 p.m.
Prime time lineup: Each Friday in November TCM is celebrating the career of star of the month Natalie Wood. This week's films focus on her later movies starting with her performance as a troubled woman who rises to Hollywood stardom in Inside Daisy Clover (1966) at 8 p.m. followed by the risque comedy, Bob & Carol & Ted & Alice (1969) at 10:15 p.m.
Late night pick: Wood's last film was the science fiction thriller Brainstorm (1983) at 12:15 a.m.

The prime time line up is all about Dustin Hoffman starting with his cross-dressing comedy, Tootsie (1982) at 8 p.m. Hoffman's Academy Award-winning performance as a savant in Rain Man (1988) at 10:15 p.m. is followed by his breakthrough performance in The Graduate (1967) at 12:45 p.m.

The Sunday Night Feature will put the spotlight on two unusual voyages starting with Stephen Boyd, Raquel Welch, and Donald Pleasence taking a journey inside the human body in Fantastic Voyage (1966) at 8 p.m. followed by Walter Pidgeon, Joan Fontaine, and Peter Lorre's underwater adventure in Voyage to the Bottom of the Sea (1961) at 10 p.m.