The Costume of the Wicked Witch of the West 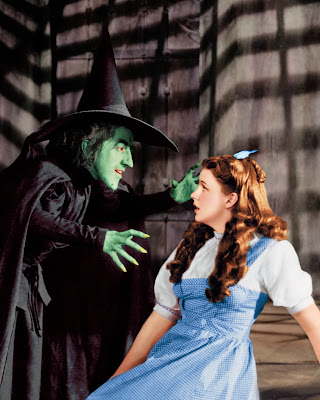 Today, I'm writing about the costume for The Wicked Witch of the West in The Wizard of Oz (1939). Here's Margaret Hamilton, who portrayed the Witch, menacing Dorothy Gale (Judy Garland).

This article is part of the Characters in Costume Blogfest: Fiction and Film hosted by Christina Wehner and Into the Writer Lea.

If you are passing out candy this Halloween, chances are you will see a child dressed like the Wicked Witch of the West in MGM's classic musical, The Wizard of Oz (1939). The makeup and costume for the legendary villain played by Margaret Hamilton has become the defining pop culture image for the witch, but Oz producers tried out several variations of the character before settling on the famous black wardrobe and green makeup. 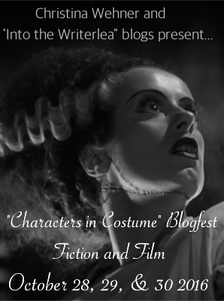 In the 1910 movie version of Oz, the character portrayed by Winifred Greenwood is quite similar to Baum's description, but the 1925 silent version eliminates the Witch entirely in favor of a villainous Oz politician, Prime Minister Kruel (Josef Swickard). Screenwriters Noel Langley, Florence Ryerson, and Edgar Allan Woolf made the Wicked Witch of the West the primary villain for MGM's version of Oz, but, at first, producer Mervyn LeRoy had a very different characterization in mind than Baum's wizened old crone.

LeRoy directed the wildly successful costume drama, Anthony Adverse (1936), which won actress Gale Sondergaard the first-ever best supporting actress Academy Award for her portrayal of a glamorous social climber. LeRoy, wanted to capitalize on Sondergaard's screen allure by portraying the Witch as a fairy tale femme fatale who was modeled on the evil Queen in Walt Disney's Snow White and the Seven Dwarfs (1938). Sondergaard did several costume tests for a glam Witch dressed in a body-hugging black sequined costume, but MGM's honchos were dissatisfied. They wanted a more traditional witch -- they felt the character would have more kid appeal at the box office -- so LeRoy uglied up Sondergaard for a series of wardrobe tests that caused the actress to immediately resign from the production.

LeRoy next turned to reliable character actress Margaret Hamilton. The Ohio native was making a decent living appearing in small parts in movies like Nothing Sacred (1937) and Saratoga (1937), but LeRoy thought her distinctive looks and voice would make her perfect for the role of both the Witch and her Kansas counterpart Almira Gulch. Hamilton, who was never sensitive about her appearance -- she always liked to say "my face has given me lots of work" -- jumped at the chance to play a role from her favorite childhood book.

Hamilton began working on Oz in October 1938, according to her introduction to The Making of The Wizard of Oz by Aljean Harmetz. She went through a series of grueling tests for everything from the prosthetic nose, chin, and nails she wore as the Witch to the length of her black costume (Hamilton had to keep on insisting that it be short enough so that she wouldn't trip over it during film). Several hairstyles were also considered before they settled on a somewhat elaborate chignon, mostly because it held the Witch's peaked hat in place.

The Witch's iconic green makeup, which doesn't appear anywhere in Baum's novel, was chosen because the hypersensitive Technicolor cameras didn't photograph Hamilton's natural skin tone well against her stark black wardrobe. Ironically, green skin would become the character trait most associated with the Witch, and it is has launched thousands of pop culture references from the book and Broadway musical Wicked to the 2013 movie Oz the Great and Powerful.

When Oz premiered in September 1939, Hamilton's iconic portrayal of the Witch garnered a lot of press and critical attention. One reviewer, who is quoted in The Wizard of Oz: The Official 75th Anniversary Companion by Jay Scarfone and William Stillman, warned parents to think carefully before taking their children to see the movie, and Mrs. T.G. Winter of the Motion Picture Producers and Distributors of America stated that "the Wicked Witch is a bit scary for ultra-nervous children."

For her own part, Hamilton had a great time playing the Witch. "It's not a particulary difficult role to play," she said in an interview. "You just wring your hands and roles your eyes and rant and rave and shriek." Hamilton reprised her Wicked Witch characterization in everything from the Abbott and Costello comedy Comin' Round the Mountain (1951) to Sesame Street, and, after Oz became a TV staple in the 1960s and 1970s, she happily posed for photographs and gave interviews about her time as the Wicked Witch.

I'll leave you with this clip about Hamilton and the Wicked Witch from the documentary, The Wonderful Wizard of Oz: 50 Years of Magic.