New on DVD: The Leopard Man 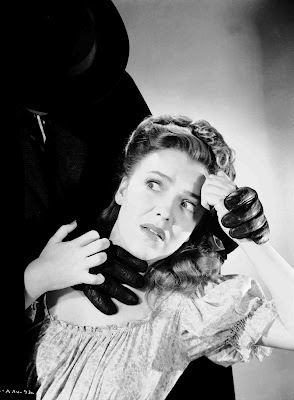 Here's what you need to know about The Leopard Man (1943), which was just released on DVD by the good folks at Warner Archive. 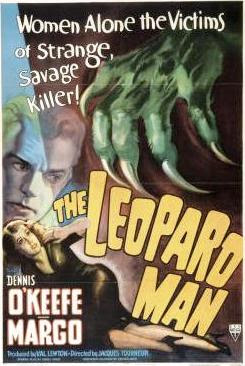 Plot: New Mexico nightclub manager Jerry Manning (O'Keefe) hires a black leopard to spice up his show, but, when the animal unexpectedly escapes, two local women (Margaret Lindsay and Tuulikki Paananen billed here as Tula Parma) end up dead. At first, the local community suspects the leopard, but Jerry has a theory that the actual culprit may be a serial killer who is stalking the small town.

Backstory: Producer Val Lewton and Tourneur had already teamed up for an unexpected horror hit in 1942's Cat People (I'm covering that one on Monday as part of the movies you should see series), so RKO Pictures executives decided to recreate the feline magic by purchasing the rights to Woolrich's bizarre crime novel about an animal obsessed serial killer who is stalking a small town in Panama Screenwriters Ardel Wray and Edward Dein extensively changed the novel, including moving the setting from Central America to the American Southwest.

Lewton and Tourneur: Lewton and Tourneur's three horror films for RKO -- the other two are Cat People and I Walked With a Zombie (1943) -- make them one of the great teams in old Hollywood history. Although the films were made on an extremely low budget, Lewton and Tourneur created a chilling atmosphere and unrivaled suspense using little more than lighting and sound techniques.

Best Performance: The Leopard Man isn't exactly an acting masterclass, but most of the RKO players give adequate performances. Especially memorable is Margo as flamenco dancer Clo-Clo and James Bell as a bizarre panther expert who has a bit too much interest in his field of study.

Best Scene: A teenage girl (Margaret Landry) is stalked by the leopard on her way home from the grocery store (clip below).


Best Line: "Cats are funny, mister. They don't want to hurt you, but if you scare them they go crazy." -- leopard trainer Charlie How-Come (Abner Biberman).

Fun Fact: During the 1950's, this was a popular double-bill at drive-in theaters with RKO's other famous creature feature, King Kong (1933).


The Critics: The Leopard Man has an 88 percent fresh audience rating on Rotten Tomatoes and Leonard Maltin gives it two and 1\2 stars in  his Classic Movie Guide.

Three Reasons to Watch:
1. Noir meets horror. In many ways, The Leopard Man can be considered both a film noir and a horror movie. Like many noir filmmakers, Lewton and Tourneur were working with an extremely low budget, which meant they had to use innovative methods like shadowy lighting and sound effects -- Tourneur makes the clicking of heels on pavement terrifying in this movie -- to create suspense.
2. Southwest locale. The Leopard Man is one of a handful of forties noirs that uses the Southwest to great effect. Especially effective is the film's creepy climax, where O'Keefe and Brooks search for the killer in the middle of a religious ceremony.
3.Big Cats. Dynamite the black leopard, who also appeared in Cat People, only has a cameo in this movie, but its glowing eyes and large fangs are terrifying.


Availability: The Leopard Man is available on DVD from Warner Archive (link below). It is also available on video on demand, and it will air at 7 a.m. Oct. 29 on TCM.

DVD Extras: The Leopard Man is paired with another Lewton-produced horror film, The Ghost Ship (1943). There is also a commentary track on The Leopard Man from director William Friedkin.
DVD horror Jacques Tourneur The Leopard Man Val Lewton Warner Archive