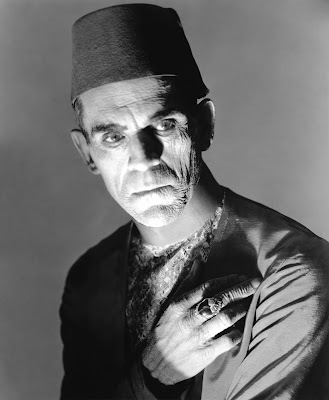 The Mummy (1932), starring Boris Karloff, is one of the classic movies airing on TCM this week.


This week, TCM is airing great movies from stars like Helen Twelvetrees, Audrey Hepburn, and William Gargan. Plus, they are putting the spotlight on cult movies and Universal Pictures horror films. So, without further ado, let's jump right in to this week's offerings. Just a note: the highlighted text has links to full length articles.

Silent Sunday Nights: The horror comedy The Monster (1925)  at midnight stars Lon Chaney as a doctor with a penchant for horrible experiments. This movie was one of the earliest mad scientist and haunted house movies.

Best Day to DVR: Friday night. TCM has a great line-up of  Universal Pictures 1930s horror films, including Dracula, The Mummy, The Invisible Man, and The Wolf Man.

Three daytime picks: The morning theme is movies starring Helen Twelvetrees. The actress starred in several melodramas in the early 1930s like Unashamed (1932) at 8:30 a.m., which was based on a real-life sensational murder case, and My Woman (1932) at 11:30 a.m. about the neglected wife of a vaudeville star (Wallace Ford). The afternoon is devoted to star of the month Christopher Lee's non-Dracula roles for Hammer Films, including his turn as one of Russian history's most sensational figures in Rasputin, the Mad Monk (1966) at 6:15 p.m.
Prime time lineup: The Lee movies continue with a lineup of  vampire movies starting with Horror of Dracula (1958) at 8 p.m. and Dracula, Prince of Darkness (1965) at 9:30 p.m.
Late night pick: Lee's bloodsucking ways continue with Dracula Has Risen from the Grave (1969) at 11:15 p.m. 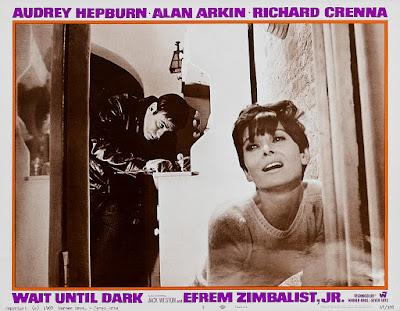 Three daytime picks: The theme is movies about the FBI starting with dedicated G-Man James Stewart recounting the history of the agency in The FBI Story (1959) at 6:15 a.m. Agents doggedly track down a young couple (Lawrence Tierney and Anne Jeffreys) suspected of stealing government documents in Step by Step (1946) at 12:45 p.m. while James Cagney joins the force in 'G' Men (1935) at 6:30 p.m.
Prime time lineup: Each Tuesday and Thursday in October, TCM is turning the spotlight on trailblazing women in Hollywood. Tuesday's selections focus on actresses who were known for philanthropy, starting with Audrey Hepburn who is represented by the thriller Wait Until Dark (1967) at 8 p.m. Hepburn served as an UNICEF Goodwill Ambassador and devoted much of her life to helping children in war-torn countries. Elizabeth Taylor, who co-founded the American Foundation for Aids Research, is represented by the modern Western Giant (1956) at 10 p.m.
Late night pick: Doris Day, who is represented by the family comedy Please Don't Eat the Daisies (1960) at 1:30 a.m., is a champion of animal welfare.

Three daytime picks: The theme is time travel starting with director George Pal's adaptation of H.G. Wells The Time Machine (1960) at 7:15 a.m. George Lucas' directorial debut THX 1138 (1971) at 2:45 p.m. is about a dystopian future filled with android police officers and mind-altering drugs. Finally, Charlton Heston and Edward G. Robinson find out exactly what is in Soylent Green (1973) at 6:15 p.m.
Prime time lineup: The prime time lineup is devoted to two movies about elections starting with Spencer Tracy as an old-fashioned mayor who must face changing times during his final election campaign in The Last Hurrah (1958) at 8 p.m. followed by intrepid Washington Post journalists Bob Woodward (Robert Redford) and Carl Bernstein (Dustin Hoffman) investigating Watergate during President Richard Nixon's re-election campaign in All the President's Men (1976) at 10:15 p.m.

Late Night Pick: Redford plays a senate candidate who loses his ideals as he rises in the polls in The Candidate (1976) at 2:45 a.m.

Three daytime picks: The theme is three's company starting with the sparkling menage a trois of Fredric March, Miriam Hopkins, and Gary Cooper in director Ernst Lubitsch's pre-code comedy Design for Living (1933) at 11 a.m. followed by brothers Humphrey Bogart and William Holden competing for Audrey Hepburn in Sabrina (1954) at 3 p.m. Lynn Redgrave can't decide between James Mason and Alan Bates in the swinging sixties classic Georgy Girl (1966) at 5:30 p.m.
Primetime lineup: The spotlight on trailblazing women continues with a look at ladies who are political activists starting with Jane Fonda, who is represented by The China Syndrome (1979) at 8 p.m., which is an expose of safety issues at nuclear power plants. Barbra Streisand combines her love for liberal politics with her romance with writer Robert Redford in The Way We Were (1973) at 10:15 p.m.
Late Night Pick: Myrna Loy, who lobbied against discrimination and was a member of the U.S. National Commission for UNESCO, is represented by The Thin Man (1934) at 12:30 a.m.

Three daytime picks: The daytime theme is movies starring William Gargan, who was a familiar presence on radio, films, and TV from the 1930s through the 1950s. Gargan and Ralph Bellamy play rival newsreel cameramen in the pre-code comedy Headline Shooter (1933) at 9:30 a.m. Gargan plays the unrequited love of a teacher (Martha Scott) in the Goodbye, Mr, Chips-esque drama Cheers for Miss Bishop (1941) at 3:15 p.m. Finally, Gargan plays a gangster who harasses band manager George Murphy in The Mayor of 44th Street (1942) at 5 p.m.
Prime time lineup: TCM is showing classic horror films each Friday in October. This week's selections are Universal Pictures horror films starting with Bela Lugosi's iconic performance as the undead Transylvanian count in Dracula (1931) at 8 p.m. followed by Boris Karloff as an ancient Egyptian who returns to life in The Mummy (1932) at 9:30 p.m.
Late night pick: Lon Chaney, Jr., transforms from an English nobleman into a werewolf in The Wolf Man (1941) at 12:15 a.m.

The prime time line up is all about cult movies starting with the Italian slasher picture Blood and Black Lace (1964) at 8 p.m. followed by the low-budget classic Carnival of Souls (1962) at 9:30 p.m. The schlock horror-fest It's Alive (1974) at 11 p.m. finds John P. Ryan and Sharon Farrell as the parents of a monstrous infant while the exploitation flick The Baby (1973) at 12:45 a.m. finds social worker Anjanette Comer with a special interest in one of her clients (David Mooney, billed here as David Manzy).

The Sunday Night Feature will put the spotlight on Frankenstein's monster each week in October. This week selections are two Frankenstein spoofs: director Mel Brooks Young Frankenstein at 8 p.m. followed by Abbot and Costello Meet Frankenstein (1948) at 10 p.m.