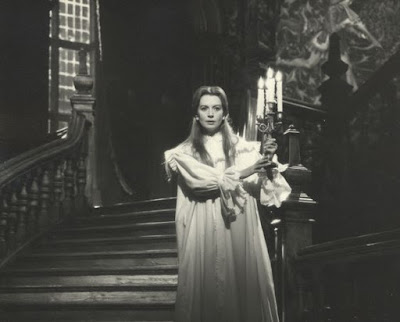 The Innocents (1961), starring Deborah Kerr, is one of the classic movies airing on TCM this week.


This week, TCM is airing great movies from stars like Christopher Lee, Paul Newman, and Deborah Kerr. Plus, they are putting the spotlight on trailblazing women in Hollywood and classic horror comedies. So, without further ado, let's jump right in to this week's offerings. Just a note: the highlighted text has links to full length articles.

Silent Sunday Nights: The avant-garde Japanese film Kuratta Ippeji (A Page of Madness)  at midnight stars Masuo Inoue as a man who struggles with his wife's confinement in an insane asylum.

Three daytime picks: The morning theme is movies about ancient heroes, including Captain Sinbad (1963) at 6 a.m. which stars Guy Williams as the intrepid sailor. The afternoon is devoted to non-horror roles from star of the month Christopher Lee starting with his small role as a submarine commander in the World War II drama, The Cockleshell Heroes (1956) at 1 p.m., which tells the story of a real life British Naval expedition that used canoes to blow up Nazi ships. Lee plays an arrogant French aristocrat in the 1958 adaptation of A Tale of Two Cities at 4:30 p.m.
Prime time lineup: The Lee movies continue with two of Lee's three films as arch villain Fu Manchu: The Face of Fu Manchu (1965) at 8 p.m. and The Brides of Fu Manchu (1966) at 10 p.m.
Late night pick: Lee's final Fu Manchu movie, The Vengeance of Fu Manchu (1967), is on  at 11:45 p.m

Three daytime picks: The theme is movies with flowers in their titles, starting with Italian director Roberto Rosselini's film about the gentle St. Francis of Assisi (Nazario Gerardi), The Flowers of St. Francis (1950) at 11:30 a.m. Alec Guinness leads a bungling gang of thieves in the comedy, The Lavender Hill Mob (1952) at 1 p.m. Finally, Ginger Rogers tries to leave her family's chosen profession behind in the drama Primrose Path (1940) at 6 p.m.
Prime time lineup: Each Tuesday and Thursday in October, TCM is turning the spotlight on trailblazing women in Hollywood. Tuesday's selections focus on actresses who made contributions during World War II starting with Bette Davis in Hollywood Canteen (1944) at 8 p.m. The actress  co-founded the club where soldiers could get free food and entertainment along with John Garfield and Jules Stein. Marlene Dietrich, who is represented by A Foreign Affair (1948) at 10:15 p.m., tirelessly supported the war effort by entertaining soldiers on the front lines.
Late night pick: Hedy Lamarr, who is represented by the spy drama, The Conspirators (1944) at 12:30 a.m., invented a radio guidance system for Allied torpedoes that was later used in wireless technology. 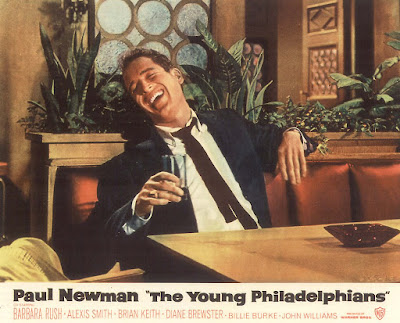 Three daytime picks: The theme is movies starring character actor Gene Lockhart starting with his role as Anne Shirley's philatelist father in the screwball comedy Too Many Wives (1937) at 10:15 a.m. Lockhart plays a drunken ship's doctor in the 1941 adaptation of Jack London's seafaring tale, The Sea Wolf at 2:30 p.m. Lockhart plays a corrupt mayoral candidate in the whodunit Find the Blackmailer (1943) at 5:30 p.m.
Prime time lineup: TCM host Robert Osborne's October picks are two great Paul Newman movies. The Young Philadelphians (1959) at 8 p.m. finds Newman as a street tough who is trying to make it as a laywer. The Western Hombre (1966) at 10:30 p.m., finds Newman as a loner raised by Apaches who is forced to help stranded stagecoach passengers.

Late Night Pick: Osborne goes to the French Riviera in late night for one of Audrey Hepburn's earliest roles in We Go to Monte Carlo (1953) at 12:30 a.m.

Three daytime picks: A birthday tribute to actress Laraine Day who was born La Raine Johnson Oct. 13, 1920, in Roosevelt, Utah, Day was one of MGM's top leading ladies of the 1940s in films like Journey for Margaret (1942) at 8:30 a.m., a touching World War II drama about a childless couple (Day and Robert Young) who try to get two orphaned children (Margaret O'Brien and Peter Severn) away from the Blitz. One of the Day's best movies is the film noir The Locket (1946) at noon about an unstable kleptomaniac who uses the men in her life played by Robert Mitchum, Brian Aherne, and Gene Raymond. TCM is also celebrating the birthday of Yves Montand with the political thriller Z (1969) at 3:15 p.m.
Primetime lineup: The spotlight on trailblazing women continues with a look at ladies who confronted the fifties blacklist of alleged Communists in Hollywood. Character actress Gale Sondergaard, who is represented by the film noir The Letter (1940) at 8 p.m., had her career cut short by the blacklist. Lee Grant, who is represented by the comedy Shampoo (1975) at 10 p.m., was blacklisted in the early 1950s.
Late Night Pick: Marsha Hunt, who is represented by the noir Raw Deal (1948) at midnight, couldn't find work in Hollywood after defending friends who were blacklisted.

Three daytime picks: The theme is racing movies starting with Kay Francis as a female aviator who enters a race to pay for her brother's medical care in Women in the Wind (1939) at 11:30 a.m. Speed (1936) at 2 p.m., finds James Stewart as an auto mechanic who invents a newfangled carburetor. This movie is notable for film footage from the Indianapolis 500. Speedway (1968) at 6:15 p.m. features Elvis Presley as a NASCAR  driver who tangles with a beautiful tax auditor played by Nancy Sinatra.
Prime time lineup: TCM is showing classic horror films each Friday in October. This week's selections are horror comedies starting with Bob Hope, Paulette Goddard and company trying to survive a night in a creepy mansion in The Cat and the Canary (1939) at 8 p.m. Director Roman Polanski's Dracula spoof, The Fearless Vampire Killers (1966) is on at 9:30 p.m.
Late night pick: No night of horror comedies would be complete without the seminal sixties spoof, Little Shop of Horrors (1960) at 11:30 p.m.

The laughs continue on Saturday morning with a lineup of  Bowery Boys horror comedies starting with Master Minds (1948) at 7 a.m. TCM's prime time lineup is all about leading lady Deborah Kerr starting with her role as an English governess who believes her young charges (Miles Stephens and Pamela Franklin) are being haunted by former servants (Peter Wyngarde and Clytie Jessop) in The Innocents (1961) at 8 p.m. Kerr plays another governess in The Chalk Garden (1964) at 10 p.m. This time her charge is a troubled young girl played by Hayley Mills. Kerr and David Niven headline the horror shocker Eye of the Devil (1966) at midnight, which is about a proper British couple who encounter a cult in rural France.