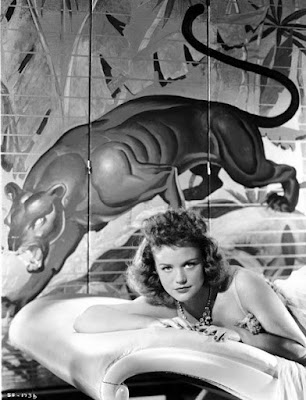 Each Monday, I'm going to recommend a classic movie you should see (for the reasons behind the 1001 series and reviews of earlier films covered go here). October's selections will focus on felines in film. This week's movie is the Val Lewton-Jacques Tourneur horror classic, Cat People (1942).

Cat People begins when engineer Oliver Reed (Kent Smith) strikes up a conversation with fashion designer Irena Dubrovna (Simone Simon) while she is sketching a black panther at the zoo. Oliver soon falls for the beautiful Irena, even after she tells him chilling stories about her upbringing in Serbia; Irena believes that she is descended from a race of feline shape shifters who will turn into deadly panthers when they are embraced by men. The couple marry despite these warning signs, but Irena's problems only increase after Oliver begins to confide in one of his female co-workers, Alice Moore (Jane Randolph). 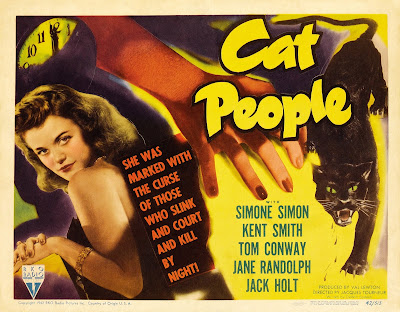 Cat People was the first of several low-budget horror films that producer Val Lewton made with RKO Pictures. The studio, which lost a great deal of money on Citizen Kane (1941), needed some fast cash. Horror films were always big draws at the box office so RKO executives gave Lewton a $150,000 budget and the title of "Cat People" and then pretty much left Lewton, director Jacques Tourneur and screenwriter DeWitt Bodeen to their own devices. The result was a huge box-office success and one of the most influential old Hollywood films of all time.

At first glance, Cat People seems steeped in medieval legends like the Universal Pictures horror films Dracula (1931) and The Wolf Man (1941), but that actually isn't the case. Lewton and Bodeen invented the Serbian legends about a race of cat people out of whole cloth, and while there was a King John of Serbia (his actual name was Jovan Nenad) he never drove any satanic panther people into the mountains, at least as far as I can tell (most of the information about him on the Internet is in Serbian or Russian).

Cat People Viewer's Guide: This movie's atmospheric suspense and shadowy cinematography influenced generations of filmmakers. Here's what to look for when you watch:

1. Simone Simon. The French actress is unforgettable as the troubled Irena, but her Hollywood career never quite reached the heights of other European stars like Marlene Dietrich and Ingrid Bergman. Her two best known American movies are Cat People and its 1944 sequel, The Curse of the Cat People.
2. The swimming pool scene. Cat People's most iconic scene features Irena, who has turned into a panther, stalking Alice while she is in a swimming pool. Lewton, Tourneur, and cinematographer Nicholas Musuraca create one of the most terrifying scenes in old Hollywood history using little more than shadowy lighting, camera angles, and sound effects.
3. The Lewton bus. A famous Lewton technique is creating a fake scare for audiences, which is known in the movie industry as "the Lewton bus" because of the sequence in Cat People where what the audience first believes is a panther's scream is actually the screeching brakes of a bus.
4 Sets. If Cat People gives you old Hollywood deja vu that's because many of the sets were from other movies. The entry way to Irena's apartment is from The Magnificent Ambersons (1942) and the zoo set was used in several RKO musicals and comedies.

Other critics: Cat People has a 93 percent fresh rating at Rotten Tomatoes and Leonard Maltin  writes that the "storyline and plot elements don't hold up, but moments of shock and terror are undiminished" in a three star review for his Classic Movie Guide. Critics in 1942 either damned the movie with faint praise -- the Variety critic wrote that Tourneur did his best with "a most difficult assignment" -- or downright hated it. The New York Times critic Bosley Crowther wrote one of his most memorable pans, complaining about the movie's "labored and obvious attempts to induce shock," but he saved his big guns for Simon. He complained vigorously about her performance, stating that "a lady who finds herself possessed of mystical feline temptations. . .should at least exercise her digits a bit more freely than does Simone Simon in this film."

The bottom line: Cat People is one of old Hollywood's most gripping horror films. Watch it for the atmospheric chills and Simon's sympathetic lead performance.

Next week, I'll wrap up the theme of felines in film with the horror spoof, The Cat and the Canary (1939).