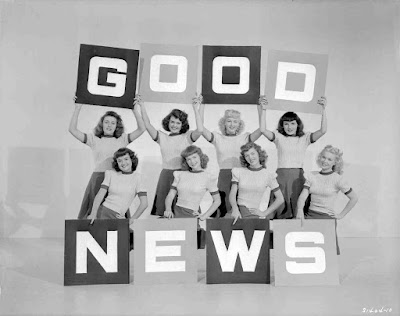 This article is part of The Back-to-School Blogathon hosted by Pop Culture Reverie.


MGM's glossy musical Good News (1947) brings back the days of letter sweaters and saddle shoes with a nostalgic look at college life in the 1920s, a time when so-called "sheiks" and "shebas" spent their undergraduate years cheering on the home team and doing the varsity drag.

Good News follows Tommy Marlowe (Peter Lawford), the captain of the Tait College football team. Tommy is chased by every girl in campus, except for the sensible Connie Lane (June Allyson), a poor student who is paying for college by working in Tait's library. When Tommy's French grades begin to falter, Connie is assigned to tutor him and the two begin to fall for each other until gold-digging student Pat McClellan (Patricia Marshall) decides she wants Tommy for herself. 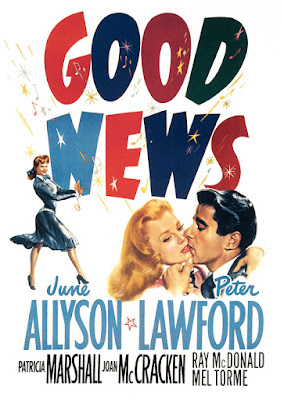 MGM had already made a 1930 movie based on the 1927 musical by B.G. DeSylva, Lew Brown, and Ray Henderson. In 1943 producer Arthur Freed decided to remake the movie with MGM's teen sensations Mickey Rooney and Judy Garland in the leads.

By the time Good News went into production both Rooney and Garland had outgrown college roles so MGM cast the wholesome Allyson and matinee idol Lawford, who was forced to make the movie despite his strong objections (Lawford felt he couldn't sing, and he also thought his crisp English accent was wrong for the role of an all-American football player). Freed also hired choreographer Charles Walters to direct this dance-heavy musical and he tapped Betty Comden and Adolph Green to punch up the dated script.

The result was a resounding success that, according to Freed,  "made nothing but money" for MGM. The movie gave Walters a huge career boost -- he went on to direct such classic musicals as Easter Parade (1948) and Summer Stock (1950) -- and it established Lawford and Allyson as one of the reigning screen couples at MGM.

Viewed today, Good News is notable for Walters' fluid direction of the many dance scenes (he rarely cuts, instead focusing on long continuous takes that show off the athletic choreography), but it really isn't the type of movie that stand up to a lot of in depth analysis. Instead, it is a breezy old-fashioned entertainment that will leave you with a smile on your face. 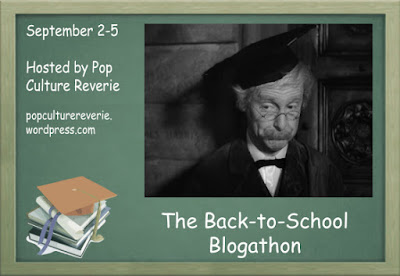 There's a lot to like about Good News, especially Comden and Green's witty script, and  Lawford, who actually sings quite well in several numbers, especially "Lucky in Love." There's also a very young Mel Torme (he was 22, but he looks about 12), who unleashes the Velvet Fog for a memorable rendition of "The Best Things in Life Are Free." However, the standout performance comes from dancer and actress Joan McCracken, who makes a big impression as Connie's pal. McCracken was already a Broadway sensation for her performance in Oklahoma!, and she is great in Good News especially in the "Pass the Peace Pipe" number, which is certainly one of the best dances put on film (clip below)

As sensational as McCracken is, Good News' piece de resistance is the "Varsity Drag" number. Allyson, Lawford, and the rest of the cast break the third wall for a rousing dance that encourages the audience to get "down on your heels, up on your toes" right along with them.

Good News is available on DVD and video on demand.