Bette's Back in The Great Lie 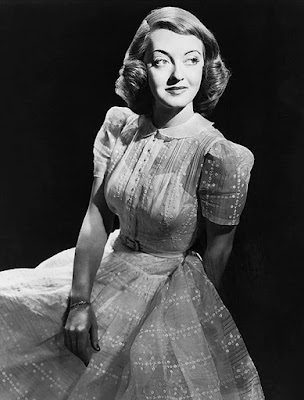 
The good folks at Warner Archive are bringing five classic Bette Davis movies back into print. Each Friday in September, I'll have a review of one of these movies (here's last week's review of All This, and Heaven Too). Today's selection is the melodrama, The Great Lie. 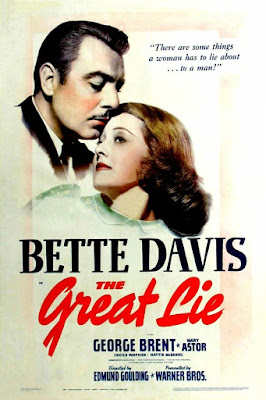 Plot: Aviator Peter Van Allen (Brent) drunkenly marries concert pianist Sandra Kovak (Astor) on a whim, but after he finds out that the ceremony wasn't legal, he returns to his first love, Maggie Patterson (Davis). The two are settling down to a happily married life on Maggie's Virginia farm when Sandra shares a bombshell that will change everyone's life forever.

Backstory: After playing a murderess in The Letter (1940) and a governess accused of murder in All This, and Heaven Too (1941), Warner Bros. began getting fan mail asking that Davis play a more sympathetic character. Studio chief Jack Warner was always eager to give the public what they wanted so he cast Davis in The Great Lie despite the fact that the actress thought the script was a silly soap opera.

Why Bette's Great in The Great Lie: Bette's right about The Great Lie being a silly soap opera -- there are about five improbable plot twists in the first 20 minutes and it gets even more unbelievable from there -- but Bette is very effective as a basically decent woman who will do almost anything to  hold onto her man. Bette shrewdly insisted that Mary Astor be cast as Sandra, and the pair's scenes together are simply magnificent with Astor's messy emotions competing with Bette's cold determination.

Best scene: Maggie and Sandra, who are alone in an isolated Arizona cabin, have a titanic battle of the wills that results in one of the best tantrum/slap scenes in old Hollywood history.

Best Line: I'm not one of you anemic creatures who can get nourishment from a lettuce leaf. I'm a musician! I'm an artist! I have zest and appetite, and I like food! -- Sandra to Maggie.

Fun Fact: Brent, who was a pilot, did his own takeoffs and landings in The Great Lie.

The Critics: The Great Lie has a 72 percent fresh audience rating on Rotten Tomatoes and Leonard Maltin calls the movie "a well-mounted soaper" in a three star review for his Classic Movie Guide.

Three Reasons to Watch:
1. Astor. She is best known today as Brigid O'Shaugnessy in her other 1941 film, The Maltese Falcon, but her diva antics as Sandra, plus her skill as a pianist, deservedly won her an Oscar.
2.  Music. Astor thanked Russian composer Piotr Tchaikovsky in her Oscar speech, and her performances of his Piano Concerto No. 1 in B Flat Minor (she's actually miming the movements to someone else's playing), are one of the film's great set pieces.
3. Costumes. Orry-Kelly's stunning gowns for Astor and chic riding attire for Davis are the height of forties glam.


Availability: The Great Lie is available on DVD from Warner Archive (link below). It is also available on video on demand.

DVD Extras: A Warner's Night at the Movies package that features a trailer for The Strawberry Blonde (1941); the Jean Negulesco-directed noir short, At the Stroke of Twelve (there's a lot of great stuff here including Negulesco's atmospheric camera work and Howard Da Silva); an Oscar-nominated Technicolor short, Kings of the Turf, about harness racing; Edward G. Robinson, Joe E. Brown and Buddy Rogers playing the sport of kings in the short, Polo With the Stars, and the cartoon Porky's Pooch, in which a street wise mutt adopts Porky Pig.

Next week, Christmas comes early with the holiday classic, The Man Who Came to Dinner (1942).