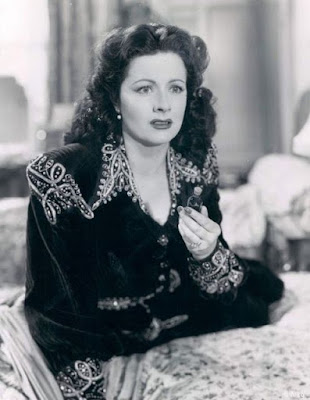 This article is part of The Margaret Lockwood Centennial Blogathon hosted by A Shroud of Thoughts.


Very few actresses were quite as good at being bad as Margaret Lockwood. British films' "Wicked Lady," whose 100th birthday is Sept. 15, made her mark playing a series of bad girls in Gainsborough Pictures and Rank Organisation costume dramas, but one of her most memorable roles was as a complicated femme fatale in the British noir, Bedelia (1946).

Bedelia tells the story of Bedelia Carrington (Lockwood), an apparently happily married newlywed who is living in Monte Carlo with her husband, Charlie (Ian Hunter). Bedelia's personality quirks -- she dislikes being photographed and is reluctant to discuss her past -- brings her to the attention of undercover insurance investigator Ben Chaney (Barry K. Barnes) who believes that Bedelia may have poisoned her first three husbands for their large life insurance policies. 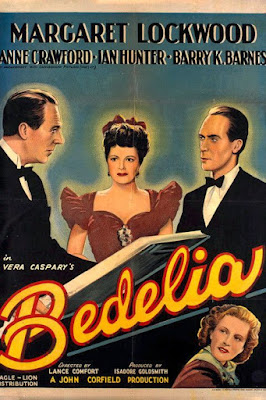 Bedelia is based on a 1945 novel by Vera Caspary that became a hot property in Hollywood after the adaptation of her earlier book, Laura, was a massive hit in 1944. However, Caspary hated director Otto Preminger's adaptation of Laura so she took the rights to Bedelia to the British film industry, which she felt was a more author friendly atmosphere than Hollywood.

Producer Isadore Goldsmith bought the rights for a British production that was financed by the Rank Organisation. Goldsmith also updated the movie from the Edwardian era to the 1940s and changed the location from Connecticut to the French Riviera and the Yorkshire Dales. A who's who of  actresses including Marlene Dietrich, Vivien Leigh, and Merle Oberon were considered for Bedelia, before Lockwood, who had just scored a major triumph in the costume drama The Wicked Lady (1945), was cast in the lead.

Viewed today, Bedelia is an absorbing whodunit that has superior production values and a first-rate cast, including Hunter as Bedelia's naive husband, Jill Esmond as a straight-laced nurse, and Anne Crawford as Charlie's devoted assistant. The film is also a good example of British noir, which flourished in the late 1940s. Bedelia references several earlier noirs like Laura, Suspicion (1941), and Double Indemnity (1944), and director Lance Comfort successfully creates a forbidding atmosphere, especially in the winter scenes where he makes a Yorkshire snowstorm seem as terrifying as the many fog-shrouded streets in American noir. In fact, Bedelia belongs on the short list of Christmas-themed noirs along with Lady in the Lake (1947), Christmas Holiday (1944), and It's a Wonderful Life (1946).

No matter how good the production values, Bedelia simply wouldn't work without a great actress in the lead. Lockwood, who is best known for playing naughty aristocrats in costume dramas, gives a complex, charismatic performance that gives Bedelia more depth than some American femmes fatale. Bedelia is certainly a wicked lady -- nobody who is quite as handy with a poison bottle as Bedelia could be anything else -- but Lockwood gives Bedelia much softer qualities than, for example, Phyllis Dietrichson in Double Indemnity or Kitty March in Scarlet Street (1945). Bedelia commits her crimes not out of coldness or greed, but out of desperation and loneliness that came from a poverty stricken childhood, which makes the film's downbeat ending all the more tragic. 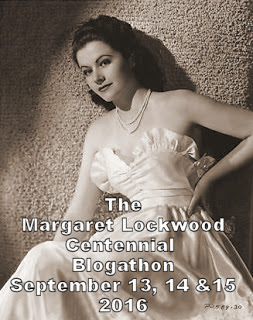 Despite featuring a great Lockwood performance, Bedelia can be somewhat hard to find on DVD. However,  it is in the public domain in the US and available on YouTube. If you have 87 minutes of time, the full movie is below.