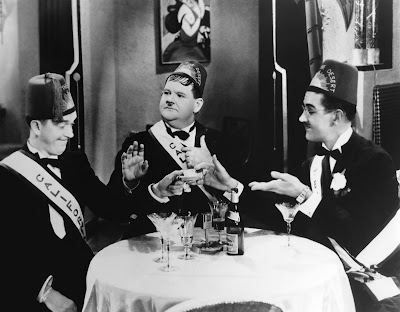 Sons of the Desert (1933), starring Stan Laurel, Oliver Hardy, and Charley Chase is one of the classic movies airing on TCM this week.


This week, TCM is airing great movies from stars like Claudette Colbert, Fredric March, and Lauren Bacall. Plus, they are putting the spotlight on slapstick comedy and honoring composer John Williams. So, without further ado, let's jump right in to this week's offerings. Just a note: the highlighted text has links to full length articles.

Sunday Prime Time: The first two Tammy movies about the naive teenager from the backwoods of Mississippi.

Silent Sunday Nights: The Red Lily (1924) at midnight is a drama about two young lovers (Ramon Novarro and Enid Bennett) who elope to Paris only to fall in with the wrong crowd.

Best Day to DVR: Tuesday night. TCM's salute to slapstick is serving up two gems from Laurel and Hardy, Sons of the Desert (1933) and The Music Box (1932), plus the raucous Marx Brothers comedy, A Night at the Opera (1935). 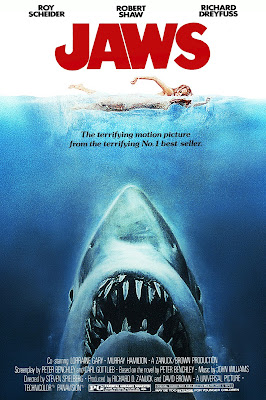 Three daytime picks: The theme is the bromantic duo of Rock Hudson and Tony Randall starting with Hudson's star turn in the saga of a Texas family in Giant (1956) at 9 a.m. followed by the duo's classic rom-com with Doris Day, Send Me No Flowers (1964) at 12:30 p.m. Finally, Randall plays a sophisticate who falls for farm girl Debbie Reynolds in The Mating Game (1959) at 4:15 p.m.
Prime time lineup: TCM's evening lineup is devoted to five-time Academy Award winning composer John Williams, who is receiving this year's American Film Institute Lifetime Achievement Award. The evening begins with director Steven Spielberg presenting Williams with the award at 8 p.m. followed by Spielberg and Williams' iconic collaboration on Jaws (1975) at 9:15 a.m.
Late night pick: Spielberg and Williams discuss their many films together in AFI's Master Class: The Art of Collaboration at 11:30 p.m. 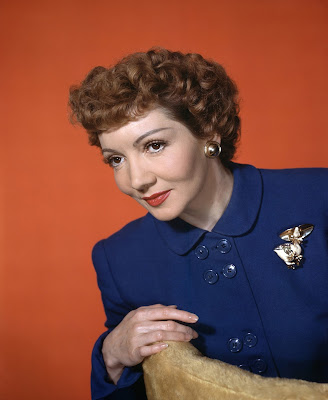 Three daytime picks: A birthday tribute to actress Claudette Colbert who was born Emilie Chauchoin on Sept. 13, 1903, in Saint-Mande, France. Colbert was one of the top stars of the 1930s in movies like the Ernst Lubitsch musical The Smiling Lieutenant (1931) at 10:15 a.m. and the drama Imitation of Life (1934) at noon. She won a best actress Oscar for her performance as a runaway heiress who is pursued by newspaper reporter Clark Gable in the screwball comedy It Happened One Night (1934) at 2 p.m.
Prime time lineup: Each Tuesday and Wednesday in September, TCM is turning the spotlight on slapstick comedy. Tuesday's selections focus on the 1930s starting with two shorts from duo Thelma Todd and Charley Chase: Dollar Dizzy (1930) at 8 p.m. and The Pip From Pittsburgh (1931) at 8:30 p.m. Next up is two of Laurel and Hardy's best starting with the boys attempts to attend a lodge convention in Sons of the Desert (1933) at 9 p.m. and their all-time classic The Music Box (1932) at 10:15 p.m. in which the duo try and fail and try again to lug a large piano up a flight of steep stairs.
Late night pick: The Marx Brothers invade high society in their first MGM comedy, A Night at the Opera (1935) at 11 p.m.

Three daytime picks: Movies from director John S. Robertson. He was most prolific in silent films -- Robertson's most famous credit is the John Barrymore version of Dr. Jekyll and Mr. Hyde (1920) -- but he also directed several interesting sound films including the World War I drama Beyond Victory (1931) at 8:45 a.m. about four soldiers' experiences on the front lines and the melodrama His Greatest Gamble (1934) at 10 am. about a professional gambler's attempts to protect his daughter (Dorothy Wilson) at any cost. Wednesday's Child (1934) at 11:15 a.m. follows a young boy (Frankie Thomas) as he copes with the effects of his parent's divorce.
Prime time lineup: The slapstick movies continue with films from the 1940s starting with W.C. Fields as a hapless security guard in The Bank Dick (1940) at 8 p.m. followed by Bud and Lou churning out both scares and laughs in Abbott and Costello Meet Frankenstein (1948) at 9:30 p.m.

Late Night Pick: No forties comedy tribute would be complete without at least one film from director Preston Sturges. TCM's selection is the witty and wonderful The Palm Beach Story (1942) at 4:30 a.m. starring Claudette Colbert and Joel McCrea as a bickering married couple who end up in a comedy of errors. 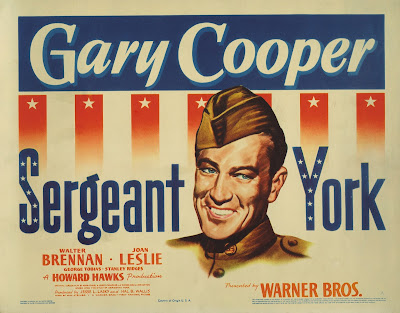 Three daytime picks: The theme is war movies starring Gary Cooper starting with the actor as the scion of a pacifist Quaker family during The Civil War in Friendly Persuasion (1956) at 10:30 a.m. Next, Coop and Ingrid Bergman fight with the rebels in the Spanish Civil War in For Whom the Bell Tolls (1943) at 2:30 p.m. followed by Cooper's Oscar winning performance as a real life Medal of Honor winner in Sergeant York (1941) at 5:30 p.m.
Primetime lineup: The theme is actor Fredric March playing politicians starting with the delightful fantasy I Married a Witch (1942) at 8 p.m. starring March as a New England politician who gets mixed up with centuries old sorceress played by Veronica Lake. Next is the Cold War thriller Seven Days in May (1964) at 9:30 p.m. in which March plays a U.S. President who must face down a military coup.
Late Night Pick: March plays Mary, Queen of Scots' third husband, the Earl of Bothwell, in the lavish costume drama, Mary of Scotland (1936) at 4:30 a.m. 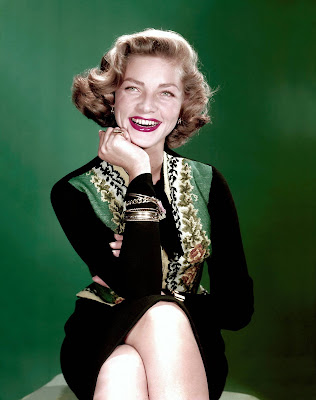 Three daytime picks: A birthday tribute to Lauren Bacall who was born Betty Joan Perske on Sept. 16, 1924, in The Bronx. First up is her film debut with frequent co-star and husband Humphrey Bogart in To Have and Have Not (1944) at 7:45 a.m. followed by the pair's best film together, The Big Sleep (1945) at 2 p.m. Finally, Bacall and Gregory Peck have great chemistry in the rom-com Designing Woman (1957) at 6 p.m.
Prime time lineup: TCM is celebrating the career of actor's actor Gene Hackman with a star of the month tribute every Friday in September. This week's selections focus on Hackman's many roles as law enforcement officers starting with the TCM premiere of A Covenant With Death (1966) at 8 p.m. in which Hackman plays a policeman who is mixed up in a wrongful conviction followed by his Oscar winning performance as hard-boiled detective Jimmy "Popeye" Doyle in The French Connection (1971) at 10 p.m.
Late night pick: The Killing (1956) at 3:45 a.m. is a fabulous noir from director Stanley Kubrick about a gang's attempts to pull off a racetrack robbery.

TCM's prime time lineup is all about trains starting with Buster Keaton riding the rails in The General (1927) at 8 p.m., followed by Jack Lemmon and Tony Curtis as two musicians on the lam in Some Like It Hot (1959) at 9:30 p.m. Next, Carole Lombard and John Barrymore take a hilarious cross country journey in Twentieth Century (1934) at 11:45 p.m. followed by ZaSu Pitts and Thelma Todd in the short Show Business (1932) at 1:30 a.m.

The Sunday Night Feature focuses on the first two of the popular Tammy movies. Debbie Reynolds originated the role in Tammy and the Bachelor (1957) at 8 p.m. while Sandra Dee took over for the inevitable sequel Tammy Tell Me True (1961) at 9:45 p.m.