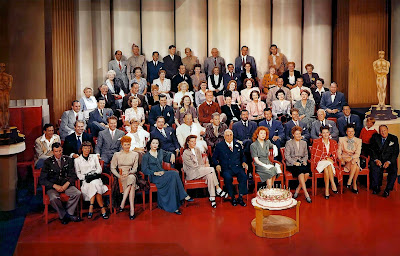 Today, I'm writing about how the old Hollywood studios created  movie stars. The photo above shows MGM chief Louis B. Mayer proudly posing with his stable of stars in 1943.

This article is part of the Classic Movie History Project Blogathon hosted by Movies Silently, Silver Screenings, and Once Upon a Screen.


In mid-20th century America, Detroit manufactured cars, Pittsburgh produced steel, and Hollywood created movie stars. While the movie-making process wasn't as cut and dried as manufacturing a Ford Edsel or building a skyscraper, the old Hollywood studios were businesses that needed to turn a profit in order to survive. From roughly 1920 to 1970, these studios flourished by creating an assembly line model for film making that churned out approximately 400 films per year that ranged from B movie cheapies to prestigious costume dramas and everything in between.

The life blood of these movie assembly lines were stars. Of course, there were several components that went into making a successful film from the costumes -- designer Adrian was largely responsible for the glamorous aura of MGM -- to the director -- Michael Curtiz's urgent, fast-paced films were a hallmark of the Warner Bros. style -- but the two most powerful entities on old Hollywood lots were the producers, who, for the most part, came up with the ideas for the films and hired the cast and crew, and the stars who were the very public face of the glamour and adventure that the studios were selling to the masses.

In order to churn out a steady stream of hits, the studios needed an endless parade of stars to fill their movies, just like car manufacturers needed rivets and bolts and steel mills needed iron ore. The industry naturally favored youth and beauty in its movie stars, but there wasn't any fixed formula in who could become a movie star. Audiences certainly swooned over the dashing good looks of Errol Flynn or the other-worldly beauty of Hedy Lamarr, but they also plunked down their hard-earned cash to watch long-in-the-tooth stars like Marie Dressler, Clifton Webb, and W.C. Fields.

While movie stardom was sold to the public through fan magazines as the most glamorous profession in the world, it was basically a very cosseted form of indentured servitude. Most stars signed seven-year contracts with the studios, and in exchange for a hefty salary, a bespoke wardrobe, and luxurious living accommodations, the stars toiled long hours under the hot studio lights, put up with endless nitpicking about their physical appearance, and endured significant studio interference in their personal lives (MGM chief Louis B. Mayer brought back the arranged marriage with disastrous unions between Mickey Rooney and Ava Gardner and Elizabeth Taylor and hotel heir Nicky Hilton).

Some stars thrived in the studio system. Clark Gable, a self-professed "lucky slob from Ohio" happily spent his entire professional career in the studio system. Others were more indifferent. Laurence Olivier carved out a successful career as a leading man in the early 1940's, but he chose to return to the theater and British films after World War II. Greta Garbo is probably the most famous actress to leave the studio system behind, but she wasn't the only one. Norma Shearer, Irene Dunne, and Deanna Durbin all left Hollywood for an off-camera life.

Others stars weren't so lucky. Judy Garland, who was perhaps the most talented star to come out of old Hollywood, was virtually destroyed by the studio system that made her a legend, while actors like Tyrone Power, Montgomery Clift, and Errol Flynn struggled after they lost their youth and dashing good looks. Mickey Rooney, who was the No. 1 box-office star when he was a teenager, endured a decades long twilight of thankless roles, money problems, and "hey, didn't he used to be" remarks.

The studios were certainly in the business of creating stars, but there wasn't any set formula on how to do this. Some stars emerged gradually. Betty Grable toiled in Hollywood for several years before Down Argentine Way (1940) made her a star, while Audrey Hepburn became an instant star and Academy Award winner in her first Hollywood film, Roman Holiday (1953). However, there were a few patterns that emerged in the star-making process.

First, the star had to have the right name. Those stars lucky enough to have elegant and easily pronounceable names like James Stewart, Katharine Hepburn, and Lucille Ball, got a pass, but if actors arrived at the studio with unappealing, hard to pronounce, or overly ethnic monikers, they were soon rechristened. Thus, Lucille LeSueur became Joan Crawford, Archie Leach became Cary Grant, and Marion Morrison became John Wayne.

Second, the star had to have a camera ready appearance. Audiences, especially pre-code moviegoers, embraced stars of all ages and sizes, but looks played a large part in the making of a movie star. That's why Gary Cooper quickly moved from stunt rider to leading man, and why stars like Hedy Lamarr and Gene Tierney, despite sometimes shaky acting, survived and thrived in the studio system.

Most actors endured some minor tweaking of their looks before they became stars, but others required extensive makeovers. Rita Hayworth's bombshell look that made her an icon in movies like Gilda (1946) was the result of hair lightening, electrolysis to raise her hairline, and posture lessons. Marlene Dietrich's German films show a charismatic, but average looking actress, but when she arrived in Hollywood, Dietrich became an international glamour icon thanks to expert lighting, a disciplined diet, and the ministrations of Paramount Pictures costume and makeup departments (Dietrich is a walking advertisement for the benefits of eyebrow plucking). 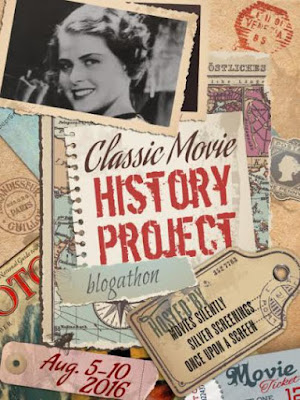 Finally, the studios relied on fan magazines to promote their stars to the general public. The magazines, including Photoplay, Modern Screen, and Screenland, provided a mixture of gossip, movie reviews, fashion tips, and glossy photography for their mostly female readers. Some stars didn't need to court the fan magazines -- stars who had a reputation as serious actors a la Fredric March or Spencer Tracy could get away with only doing the occasional interview -- but most female stars and the handsome matinee idols were the staples of the fan magazines.

No one courted the fan magazines quite as assiduously as Joan Crawford. Crawford, who probably worked harder at being a movie star than anyone else, posed for endless photographs, offered her home for interior decorating features, gave tips on makeup and fashion, and offered up intimate exclusives about her love life to the magazine's breathless writers (whoever happened to be Mr. Crawford at the time also got a lot of play in the fan magazines). Even in the 1950's and 1960's, when fan magazines had mostly moved on to bright young things like Tab Hunter, Natalie Wood, and Debbie Reynolds, Crawford still shows up plugging products and answering questionnaires as the last of the old Hollywood glamour queens.

If you want to read more about the old Hollywood studio system, check out Jeanine Basinger's book, The Star Machine. You can also visit the Media History Digital Library, which has a complete collection of fan magazines.