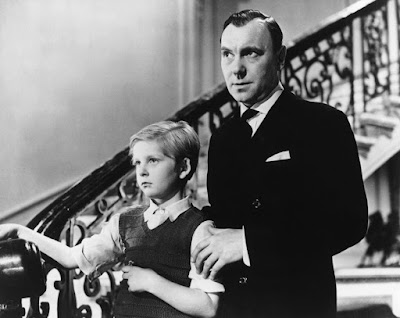 This article is part of The 2016 TCM Summer Under the Stars Blogathon hosted by Journeys in Classic Film.

Ralph Richardson was one of the great Shakespearean thespians of the 20th century, but he also carved out a successful six-decade career in movies as an Academy Award-nominated character actor. Richardson's own favorite role was in the 1948 British film noir, The Fallen Idol, where he plays a butler who is falsely accused of his wife's murder.

The Fallen Idol tells the story of Phillipe, the young son of the French ambassador to Great Britain. Phillipe, or Phile as he likes to be called, is best friends with Baines (Richardson), the embassy's amiable butler, who likes to regale the lonely little boy with made-up tales of his lion-hunting days in Africa. Baines also protects Phile from his wife (Sonia Dresdel), a shrewish woman who regularly slaps Phile and even burns his pet snake in the incinerator. When Mrs. Baines dies after an accident on the embassy's staircase, Phile mistakenly believes that Baines killed her, and the series of lies that he tells the police in order to protect his beloved friend only land Baines in more hot water. 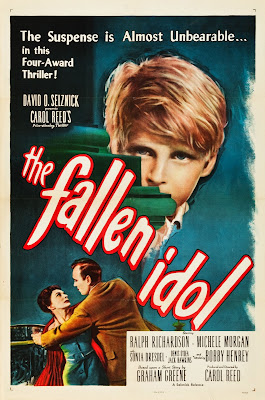 The Fallen Idol was the first of three collaborations between director Carol Reed and writer Graham Greene. Reed had just scored an international hit with the noir Odd Man Out (1947), when producer Alexander Korda suggested that the pair collaborate on an adaptation of Greene's short story, The Basement Room. Reed and Greene came up with the ingenious idea of changing the plot from a boy who witnesses a murder to that of a boy who mistakenly believes he witnessed a murder, which created a domestic drama that is filled with as much intrigue and deceit as any of Greene's later spy thrillers.

The Fallen Idol was a massive international hit in 1948 garnering critical accolades (it was one of the National Board of Review's top ten films for 1948), major awards (it won the BAFTA for best film and was nominated for two Oscars), and a brisk box-office business. Today, the film is especially intriguing for Reed's style of cinematic formalism that he would perfect in he and Greene's masterpiece, The Third Man (1949).

There's Reed's signature Dutch angles and chiaroscuro lighting, but the most interesting part of Reed and cinematographer Georges Perinal's photography is their modified use of  the subjective camera technique, meaning the audience sees the action through the eyes of the main character, which in this case is Phile. You can see how this is done in the clip of the opening scene below. Reed gives us a close-up of Phile peering through the staircase and then turns the camera around so both the audience and Phile are watching Baines go about his daily routine.


In addition to his expert camerawork, Reed also gets a remarkable performance out of the 8-year-old Henrey, who was personally chosen by Korda after he spotted the boy on the cover of a memoir written by his mother, Madeleine Gal (Gal was French and the family had lived for a time in Normandy, which gave Henrey exactly the right accent for his character). Henrey had zero acting experience, so Reed had to work tirelessly with the young boy to get the desired effect for each scene. Reed usually fed Henrey his lines just before filming and even at one point had a magician perform off camera so he could get the reaction shot he wanted.

The rest of the cast was rounded out by stage and screen veterans, most notably Richardson, who gives a fine, understated performance as Baines. Richardson's first love was the theater, and he was always somewhat dismissive of his film work saying, "I find I cannot increase my talent by working in pictures any more than a painter can do so by increasing the size of his brush," according to an interview quoted in the TCM Database. Despite his misgivings, Richardson forged a remarkable career as a character actor in both American and British films. He is probably best known to old Hollywood fans as the cold Dr. Sloper in The Heiress (1949), but he is also remarkable in The Fallen Idol as the subtly devious Baines, whose small indiscretions and secretive behavior make the police suspect he is guilty of major crimes.

Although Baines is an extremely likable character -- it's hard not to root for a man who helps a cute 8-year-old care for his pet snake -- he is also flawed, and his flaws, especially his tendency to lie, inevitably rubs off on the impressionable Phile. Through his fanciful stories about big-game hunting in Africa and his white lies to protect Phile from the harshness of Mrs. Baines, the butler has taught the young boy that "sometimes lies are acts of kindness," a statement that has enormous ramifications, especially when those lies almost send Baines to the gallows.