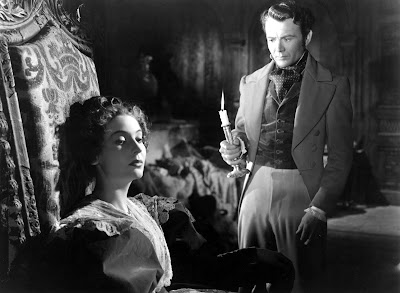 This article is part of The Third Annual British Invasion Blogathon hosted by A Shroud of Thoughts.


In many ways, 19th century author Charles Dickens is the quintessential English writer. British director David Lean, who is Dickens' best film interpreter, adapted two of his novels to the big screen in the late 1940's. Today, I'm reviewing the first of those films, Great Expectations (1946), a movie that deals with the themes of class, money, and unrequited love.

Great Expectations tells the story of Phillip Pirrip, or Pip (played by Anthony Wager as a child and John Mills as an adult), a young orphan who lives with his older sister (Freda Jackson) and her blacksmith husband, Joe (Bernard Miles), in rural England. Pip seems destined to become a blacksmith until one day he gets an invitation to come and visit Miss Havisham (Martita Hunt), a rich eccentric who invites him to play with her ward, Estella (played by Jean Simmons as a child and Valerie Hobson as an adult). When an unknown benefactor pays for Pip to be educated as a gentleman, he mistakenly believes his patron is Miss Havisham, and that she intends for him to marry Estella. 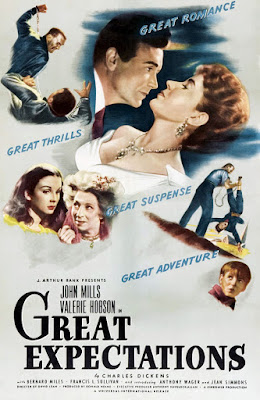 Lean made Great Expectations after his classic romance Brief Encounter (1945) became a worldwide hit. Producer Anthony Havelock-Allan suggested that the director's next film be a literary adaptation. Lean decided on Great Expectations because he had been impressed by a stage version he saw that was written and directed by a young actor named Alec Guinness (Guinness, as he did in the film, took on the role of Pip's friend, Herbert Pocket, in the play).

The result was another international hit. Great Expectations won two Academy Awards for best art direction and best black and white cinematography, and Lean was also nominated for best director and best adapted screenplay (he shared the last nomination with Havelock-Allan and Ronald Neame).

The movie considerably raised the profile of several of the actors, including Mills, Miles, and Finlay Currie, who plays the escaped convict Abel Magwitch (ironically, he would become old Hollywood's go-to actor for saintly old men in fifties Biblical epics like Quo Vadis and Ben-Hur). However, the cast standouts are Hunt, who gives the definitive portrayal of the vengeful Miss Havisham, Simmons, who sparkles as the beautiful, but cruel Estella, and Guinness, who practically walks away with the movie in his scenes as the amiable Herbert (one of the great star-making entrances in movie history belongs to Guinness in this movie).

Great Expectations also established Lean as perhaps the best British film director (he certainly has stiff competition from Michael Powell and Emeric Pressburger, Carol Reed, and Laurence Olivier, all of whom made cinematic masterpieces in the postwar period). The film's visual style, especially in the opening scene in the graveyard and in Miss Havisham's decaying mansion, owes much to the Universal Pictures horror films of the 1930's (clip above), but Lean's handling of the story is pure Dickens. The author's novels often veered widely from tragedy to comedy, and Lean remains true to that spirit, offering us both the gentle comedy of Herbert and the pompous Uncle Pumblechook (Hay Petrie) and the Gothic horrors of Miss Havisham's rat-infested wedding cake and a rural cemetery on a fog-shrouded December evening. 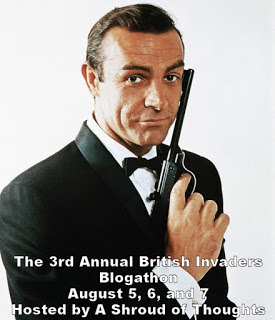 The film also highlights Dickens major themes of class, money, and love. The British class system hangs heavily over Great Expectations; in fact, Pip describes himself in the film as a "snob" after he attains the status of a gentleman, and his rejection of Joe for his gauche manners and lowly occupation is all the more heartbreaking once Pip find the true identity of his benefactor.

Great Expectations other great theme is love, or rather the lack thereof. The contrast between the vengeful Miss Havisham, who vows revenge on the entire male gender after being left at the altar by her fiance, is in striking contrast to the open-hearted nature of both Joe and Herbert, who suffer personal setbacks without ever becoming angry or bitter about their circumstances. This is the painful lesson that both Pip and Estella must learn, but whether they have or not is left open-ended in the movie's ambiguous final scene.


Great Expectations is available on DVD, Blu ray and  video on demand.