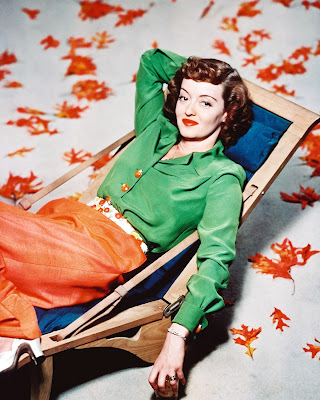 Get ready for some fabulous this fall, because Old Hollywood Films is ushering in autumn with a heaping helping of Miss Bette Davis.

* The good folks at Warner Archive are re-releasing five of Bette's best movies. In celebration, I'll have a new review every Friday starting on Sept. 2 with Bette's complex portrayal of a murderess in the classic noir, The Letter (1940).

* This year's Academy Award winner for best picture, Spotlight, has brought back attention to the good, old fashioned newspaper movie. In September, I'll continue the 1001 classic movie series by looking at three of the best old Hollywood films about the printed page: the screwball comedy His Girl Friday (1940), the noir The Sweet Smell of Success (1957), and the Western, The Man Who Shot Liberty Valance.

There's some great blogathons in September.

* First, I'll write about MGM's version of college life in the glossy musical Good News (1947) for The Back to School Blogathon on Sept. 2-5.

* Next, I'll celebrate British actress Margaret Lockwood's 100th birthday with a review of her great performance in the noir Bedelia (1946) for The Margaret Lockwood Centennial Blogathon on Sept. 13-15.

* Finally, I'll wrap up the month with a review of director Howard Hawks' classic thriller The Thing From Another World (1951) for Keep Watching the Skies: Science Fiction Movies From the 1950s Blogathon on Sept. 26-28.