A Viewer's Guide for Week 2 of Summer Under the Stars 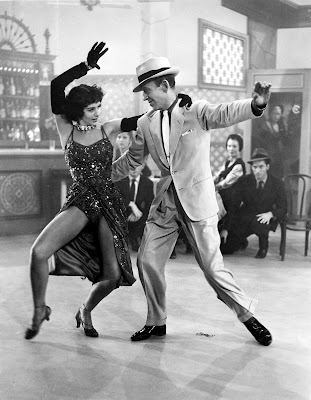 The Band Wagon (1953), starring Cyd Charisse and Fred Astaire, is one of the classic movies TCM will feature during week two of the 2016 Summer Under the Stars film festival.

Each August, TCM presents Summer Under the Stars, a month-long film festival that celebrates the talents of some of old Hollywood's most beloved actors with 24 hours of their best movies. This year's Summer Under the Stars continues on Monday with swimming sensation Esther Williams, followed by cowboy star Tim Holt on Tuesday; beautiful and brainy Hedy Lamarr on Wednesday; leading man Spencer Tracy on Thursday; America's sweetheart Janet Gaynor on Friday; thespian Ralph Richardson on Saturday, and dancer Cyd Charisse on Sunday. 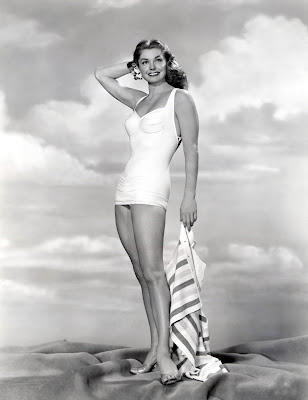 Born: Aug. 8, 1921, in Inglewood, Calif.
Died: June 6, 2013, in Los Angeles. She was cremated and her ashes were scattered at sea.
Bio: Williams was already a championship swimmer when she joined Billy Rose's Aquacade after the 1940 Olympics were cancelled because of World War II. MGM talent scouts noticed her and put her under contract. At first, she appeared in supporting parts, but Williams quickly moved her way up to her first Technicolor musical, Bathing Beauty (1944) at 8 p.m. That film set the pattern for Williams career, and in the Postwar period she was one of MGM's top stars in aquatic musicals like Thrill of a Romance (1945) at 4 a.m. with Van Johnson, Neptune's Daughter (1949) at 2 a.m. with Ricardo Montalban, and Pagan Love Song (1950) at 11 a.m. with Howard Keel. MGM occasionally gave Williams a change of pace, such as in the newspaper drama The Hoodlum Saint (1946) at 6 a.m. and the baseball musical Take Me Out to the Ball Game (1949) at midnight, but her bread and butter was always the splashy Technicolor musicals that featured elaborately choreographed numbers like Million Dollar Mermaid (1952) at 10 p.m. 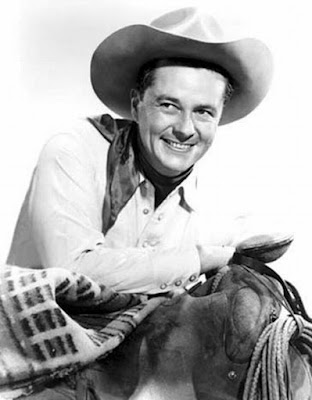 Born: Feb. 5, 1913, in Beverly Hills, Calif.
Died: Feb. 15, 1973, in Shawnee. Okla. Holt is buried in Memory Lane Cemetery in Harrah, Okla.
Bio: Born Charles John Holt III, the actor came from a show business family that included his father, Western star Jack Holt. Immediately after graduating military school in 1938, Holt began appearing in movies for RKO Pictures. He acted in all types of movies, but he became a star in B Westerns like Pirates of the Prairie (1942) at 8:15 a.m. and Sagebrush Law (1943) at 10:15 a.m. usually appearing alongside his singing sidekick Cliff Edwards. Edwards was later replaced by Richard Martin in movies like Masked Raiders (1949) at 1:45 p.m. and Riders of the Range (1950) at 4:15 p.m. Holt played the lead role in director Orson Welles family drama The Magnificent Ambersons (1942) at 10:15 p.m. (Welles called Holt "one of the most interesting actors that's ever been in American movies"), and he had a plum role as a Nazi in Hitler's Children (1943) at 1:30 a.m. Holt's career was interrupted by World War II, where he served valiantly with a B-29 bomber crew and earned a purple heart for injuries sustained in battle. One of Holt's best later roles was as a gold-hungry prospector in The Treasure of the Sierra Madre (1948) at 8 p.m. 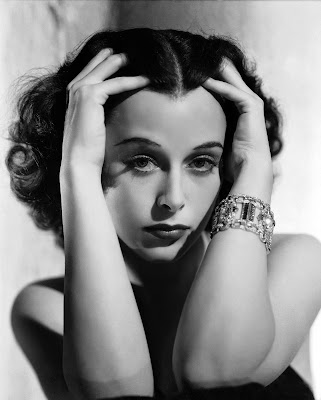 Born: Nov. 9, 1914, in Vienna.
Died: Jan. 19, 2000, in Casselberry, Fla. Buried in the Zentralfriedhof cemetery in Vienna.
Bio: Born Hedwig Kiesler, Lamarr was the daughter of a prominent Viennese banker, who had a mildly scandalous career in German films before catching the attention of MGM chief Louis B. Mayer. Lamarr's first Hollywood film, Algiers (1938) made her an overnight sensation (that film is airing during the Charles Boyer celebration on Aug. 29), and MGM quickly cast her opposite their top male stars. She appeared in three films with Spencer Tracy including I Take This Woman (1940) at 6 a.m. and Tortilla Flat (1942) at 2 p.m.; in her familiar sultry native role in White Cargo (1942) at 8 p.m. with Walter Pidgeon and Lady of the Tropics (1939) at 9:45 p.m. with Robert Taylor, and as an icy Russian streetcar conductor opposite Clark Gable in the Ninotchka-inspired Comrade X (1940) at 3:30 a.m. MGM rarely ever gave Lamarr any acting challenges -- her own favorite performance was an independent woman who embarks on a star-crossed romance with Robert Young in H.M. Pulham, Esq. (1941) at 10 a.m. -- but her lasting contribution to society is she and composer George Antheil's invention of "spread spectrum" or "force-hopping" technology, which led to several breakthroughs in wireless communication. 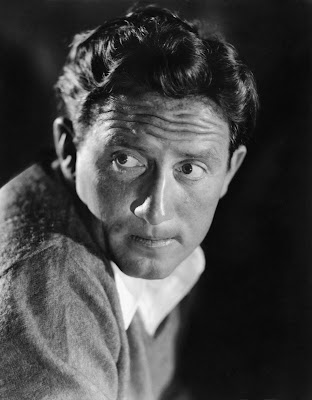 Born: April 5, 1900, in Milwaukee.
Died: June 10, 1967, in Beverly Hills. Buried in Forest Lawn Memorial Park in Glendale, Calif.
Bio: Tracy grew up in a solidly middle class family in Milwaukee, and he became interested in acting while attending Ripon College. Tracy eventually earned a scholarship to the American Academy of Dramatic Arts in New York City, and he carved out a successful career on Broadway before heading to Hollywood where he was put under contract by the Fox Film Corporation. At first, Tracy only got lackluster parts, but a plum role in the prison drama 20,000 Years in Sing Sing (1932) at 6 a.m. got him attention in Hollywood. MGM signed him in 1935, and after a solid performance opposite Myrna Loy in the gangster drama Whipsaw (1935) at 4:15 a.m. Tracy won back-to-back Academy Awards for playing a Portuguese fisherman in Captains Courageous (1937) at 9:30 a.m. and the idealistic Father Edward Flanagan in Boys Town (1938) at 2 a.m. Tracy's later career comprised of his nine films with partner Katharine Hepburn -- TCM is showing Woman of the Year (1942) at 4 p.m. and Desk Set (1957) at 6 p.m. -- and elder statesmen roles in movies like the Nazi war crimes drama Judgment at Nuremberg (1961) at 8 p.m. and the modern Western Bad Day at Black Rock (1955) at 11:15 p.m. 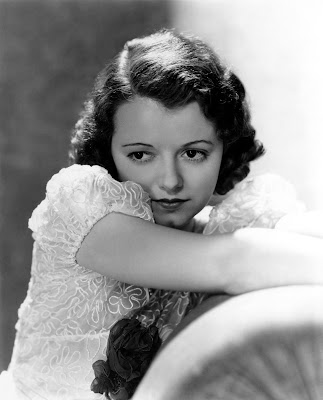 Born: Oct. 6, 1906, in Philadelphia.
Died: Sept. 14, 1984, in Palm Springs, Calif. Gaynor is buried in the Hollywood Forever Cemetery.
Bio: Born Laura Gainor, the young woman led a peripatetic life until she and her family landed in LA. where Gaynor worked odd jobs, including as a movie extra in silent films. This led to bit parts in Hal Roach comedies and then a contract with Fox where her sweet demeanor and wholesome prettiness made her a top star. She won the first best actress Oscar for three performances including Street Angel (1928) at 10 p.m. and she and actor Charles Farrell, who were known as "America's favorite love birds," made a string of successful movies, including Lucky Star (1929) at 8 p.m., Sunny Side Up (1929) at 2 a.m. and Change of Heart (1934) at 6 p.m. She also found success in the musical State Fair (1933) at 4:15 p.m. and the comedy The Farmer Takes a Wife (1935) at 10 a.m., which was the screen debut of Henry Fonda. Gaynor's best known sound role was in the original version of A Star Is Born (1937) at 2 p.m. She earned a second Oscar nomination for that performance, but Gaynor only made two more films, the screwball comedies Young in Heart (1938) at 8 a.m. and Three Loves Has Nancy (1938) at 4:15 a.m., before retiring to a quiet life of painting. 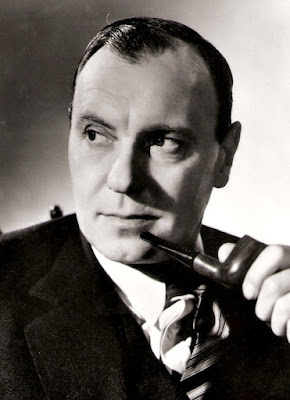 Born: Dec. 19, 1902, in Cheltenham, England.
Died: Oct. 10, 1983, in London. Buried in Highgate Cemetery in London.
Bio: One of the great Shakespearean actors of the 20th century, Richardson became interested in acting when he saw a production of Hamlet as a teenager. He began appearing with touring companies and in repertory theater in the 1920's and, by the 1930's, he was a top star in the West End and Broadway. Richardson also began a career in films at this time, mostly appearing in supporting parts in movies like the medical drama The Citadel (1938) at 6 a.m., the science fiction movie Things to Come (1936) at 8 a.m., the costume drama The Four Feathers (1939) at 2 p.m., and the romantic comedy, The Divorce of Lady X (1938) at 4 a.m. Richardson and his fellow thespian Laurence Olivier led The Old Vic theater company to three legendary seasons in the mid-1940's before he departed to make a series of successful films. Richardson played cold authority figures in The Heiress (1949) at 8 p.m. and in Anna Karenina (1948) at midnight, but his favorite performance came as a devious butler in director Carol Reed's British noir The Fallen Idol (1948) at 10:15 p.m. Richardson continued to alternate between stage and film for the rest of his career, playing supporting parts in movies like the biopic Oscar Wilde (1960) at 2 a.m. and the cult film Time Bandits (1981) at 4 p.m. 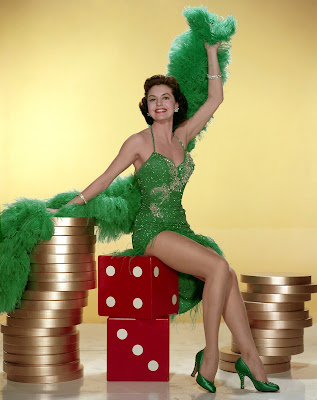 Born: March 8, 1922, in Amarillo, Texas.
Died: June 17, 2008, in Los Angeles. Hillside Memorial Park in Culver City, Calif.
Bio: Born Tula Finklea, Charisse began taking dancing lessons at age 6 after a bout of polio. Her talent was so great that she began studying with professional ballet dancers at age 12, and, by age 14, she was a member of the Ballet Russe de Monte Carlo. After the outbreak of World War II, Charisse went to Hollywood where she quickly earned a contract with MGM. The studio was in need of female partners for its male dance stars Fred Astaire and Gene Kelly, and she appeared in a successful string of musicals in the 1950's like Singin' in the Rain (1952) at 2 p.m., Brigadoon (1954) at 4 p.m., Silk Stockings (1957) at 6 p.m., The Band Wagon (1953) at 8 p.m., and It's Always Fair Weather (1955) at 10 p.m. As the popularity of the musical waned, Charisse largely gave up dancing for appearances on TV and in films like the noir Party Girl (1958) at midnight.