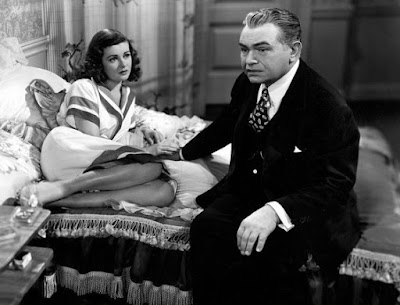 Scarlet Street (1945), starring Joan Bennett and Edward G. Robinson, is one of the 1001 classic movies you should see.

Each Monday, I'm going to recommend a classic movie you should see (for the reasons behind the 1001 series and reviews of earlier films covered go here). August's theme coincides with TCM's Summer Under the Stars, a month-long film festival that celebrates the talents of some of old Hollywood's most beloved actors with 24 hours of their best movies. I'll review one of the films that are airing each Monday starting with the classic film noir, Scarlet Street (1945), which stars Aug. 1 honoree Edward G. Robinson.

Scarlet Street tells the story of Chris Cross (Robinson), a meek, middle-aged cashier who rescues a lovely young woman, Kitty March (Joan Bennett), from getting slapped around by her boyfriend, Johnny Prince (Dan Duryea). The impressionable Chris, who likes to paint in his spare time, instantly falls in love with Kitty and leads her to believe that he is a famous artist who sells his works for $50.000 a pop. Kitty and Johnny are soon taking advantage of Chris' crush by plotting an elaborate con involving the naive cashier's amateur artwork. Scarlet Street is based on the French novel La Chienne by Georges de La Fouchardiere that had already been made into a 1931 movie by director Jean Renoir. Producer Walter Wanger acquired the rights as a follow-up to the successful noir, The Woman in the Window (1944), which was also directed by Fritz Lang and starred Robinson, Bennett, and Duryea in very similar roles. Many critics noticed Scarlet Street's similarity to the earlier film, but the movie was still a box-office success, and it is regarded today as one of the seminal movies of the film noir genre.

Robinson didn't enjoy making Scarlet Street because his character was so similar to the role he played in The Woman in the Window. Despite that fact, Robinson turns in an excellent performance that is miles away from the tough guys he played in the 1930's. Robinson expertly portrays each stage in Chris' life. He starts the movie as a milquetoast cashier who puts on an apron to do the dishes each evening, but throughout the film he is transformed, first, by his love for Kitty, and then by his jealousy and hatred for Johnny.

Scarlet Street Viewer's Guide: This movie is one of the seminal noirs in both style and theme. Here's what to look for when you watch:

1. Noir style, part 1. Noir was heavily influenced by the German expressionist films of the 1930's. Lang made several classic German expressionist films, and he brought that style to Scarlet Street, which is filled with dark rain-soaked streets, shadowy cinematography, and odd camera angles.
2. Noir style, part 2: Scarlet Street's themes of guilt and shame are also quite similar to German expressionism, especially Lang's masterpiece M (1931) about a tormented child killer (Peter Lorre). The wages of sin lie heavily on all three major characters, who are either dead by the end of the film or in a sort of living death where they can never escape their crimes.
3. Bennett. Bennett had been an unassuming blonde starlet until she dyed her hair brunette and became one of the queens of noir by playing a series of femme fatales in four movies directed by Lang.
4. Paintings. John Decker, a well-known artist in Hollywood who often painted portraits of stars like Greta Garbo, W.C. Fields, and John Wayne, created the original artwork for Scarlet Street.

Other critics: Scarlet Street has an 100 percent fresh rating at Rotten Tomatoes, and Leonard Maltin unfavorably compares it to The Woman in the Window writing that the "stars and director keep it interesting, but don't match earlier film" in a three star review for his Classic Movie Guide. Critics in 1945 had mixed opinions of the movie. The New York Times critic Bosley Crowther praised Duryea's performance but felt the rest of the movie was lackluster. "For those who are looking for drama of a firm and incisive sort, Scarlet Street is not likely to furnish a particularly rare experience. Dudley Nichols wrote the story from a French original, in which it might well have had a stinging and grisly vitality. In this presentation, however, it seems a sluggish and manufactured tale, emerging much more from sheer contrivance than from the passions of the characters involved." The Time magazine critic acknowledged that the movie "is an ambitious melodrama with fine directorial touches and expert acting," but noted that "its trouble is its painfully obvious story."

The bottom line: Scarlet Street has a few too many bickering scenes between Bennett and Duryea, but it is still one of Lang's finest noirs. Watch it for Robinson's masterful performance and Lang's superb direction, especially in the ending sequences.

Availability: Scarlet Street will air at 8 p.m. Monday (8-1) as part of the Summer Under the Stars celebration of Edward G. Robinson. The film is also available for streaming on Hulu, Amazon Prime, and Fandor, and on DVD, Blu-ray, and video on demand.

Next week, I'll continue the Summer Under the Stars theme with the musical biopic Million Dollar Mermaid starring Esther Williams.