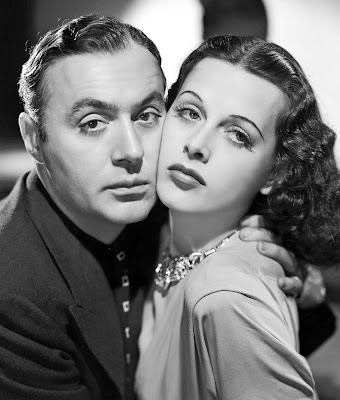 Algiers, starring Charles Boyer and Hedy Lamarr, is one of the 1001 classic movies you should see.

Each Monday, I'm going to recommend a classic movie you should see (for the reasons behind the 1001 series and reviews of earlier films covered go here). August's theme coincides with TCM's Summer Under the Stars, a month-long film festival that celebrates the talents of some of old Hollywood's most beloved actors with 24 hours of their best movies. This week's selection is the exotic classic, Algiers (1938), starring Aug. 29 honoree Charles Boyer.

Algiers tells the story of Pepe le Moko (Boyer) a jewel thief who is hiding out in the Casbah, a fortress-like sector of the city of Algiers. Pepe can avoid police capture as long as he stays inside the Casbah, but the restless Frenchman becomes increasingly homesick for Paris, especially after meeting a beautiful tourist (Hedy Lamarr) who tempts him to leave his hideout. 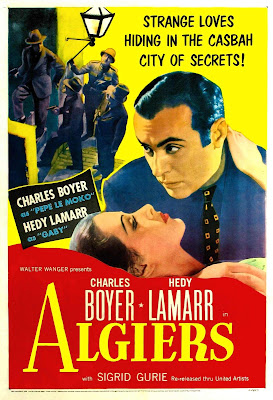 Algiers is a remake of the French film Pepe le Moko (1937), which starred the great French actor Jean Gabin in the title role. Independent producer Walter Wanger bought the rights to the film for a Hollywood remake that was slavishly faithful to its source material (Wanger also bought up all the American prints of Pepe le Moko so there would be no competition between the two films). The result was a box-office bonzanza that made Lamarr an instant star in her first American film, and introduced American audiences to the labyrinthine streets and bazaars of North Africa.

Boyer was already a star when he made Algiers, but the movie's massive success and his charismatic performance, forever established his reputation as the go-to Gallic lover -- or "lovair" as Bugs Bunny put it -- in old Hollywood. Boyer was very, very unhappy making the movie: He felt he was only doing a pale imitation of Gabin's performance, and he was displeased with Lamarr's limited acting abilities, but none of this shows up onscreen. Instead, viewers are treated to one of the great romantic performances of all time that established a type of cynical, yet vulnerable antihero that would become a standard part of many films noir.

Algiers Viewer's Guide: This movie is great escapist fare and one of  the most influential old Hollywood films ever made. Here's what to look for when you watch:

1. Influences. Algiers was the first time many Americans got an up-close view of the exotic lifestyle of North Africa and the movie set off a pop culture craze that led to everything from Sherlock Holmes visiting Algiers to Casablanca (1942). The movie even resonates in the present day with films like Inception (2010) featuring chase scenes through twisting North African alleyways.
2. Pepe le Pew. The Looney Tunes amorous skunk was drawn directly from Boyer's portrayal of Pepe le Moko right down to the thick French accent and the habit of getting twitterpated by any attractive female that crosses his path.
3. Cinematography. While Algiers is a very faithful remake of Pepe le Moko, it does have inventive camera work from the great cinematographer James Wong Howe. He convincingly gives audiences the feeling of the closed-in spaces and maze-like streets of the Casbah on a Hollywood sound stage, and his use of night scenes and shadows influenced film noir.
4 Supporting Cast. Much like Casablanca, this movie features a tremendous cast of character actors in the supporting parts, although admittedly some of the old Hollywood stalwarts don't really look like they belong in the Casbah (the great Alan Hale gives his usually fine performance, but he does look a little out of place in an ill-fitting argyle sweater). The standouts are Joseph Calleia as a wily police inspector and Gene Lockhart, in an Academy Award-nominated performance, as an oily turncoat in Pepe's gang.


Other critics: Leonard Maltin praises Calleia and Lockhart's performances in this "well-cast romance" in a three star review for his Classic Movie Guide. Critics in 1938 were mostly positive. The Variety critic, who rather oddly describes Boyer's character as a "Parisian youth," singled out the "fine cast," writing that  "Lamarr comes next to Boyer in a photo finish. On the side of the unrelenting police is Joseph Calleia, as the inspector. Gene Lockhart is a stand-out as one of the informers."


The bottom line: Algiers isn't as good as Pepe le Moko, but it is still a fine romance in the grand old Hollywood tradition, that features great performances from Boyer, Calleia, and Lockhart.

Availability:  Algiers is one of the old Hollywood movie in the public domain so it is available for free streaming from the Internet Archive. It is also available on DVD.

Next week, I'll be off for Labor Day, but I'll start the September theme of newspaper movies on Sept. 12 with the classic screwball comedy His Girl Friday (1940).