The Costumes of Gone With the Wind: Scarlett's Barbecue Dress 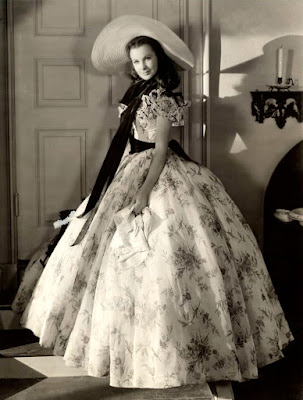 Today, I'm taking a behind the scenes look at the green-sprigged muslin dress Scarlett O'Hara (Vivien Leigh) wears to the barbecue at the Twelve Oaks plantation in Gone With the Wind (1939).


This article is the second in a four-part series. For part one, go here.

The green-sprigged muslin dress that Scarlett O'Hara (Vivien Leigh) wears to the barbecue at the Twelve Oaks plantation is one of the most famous costumes in old Hollywood history. The iconic gown by costume designer Walter Plunkett is modeled on both Gone With the Wind author Margaret Mitchell's descriptions and popular evening wear patterns of the 1850's and 1860's.

Mitchell, who was fascinated by the history of costume design, writes in detail about clothing throughout her 1936 novel, including a description of the green-sprigged muslin gown that Scarlett wears to the barbecue. The beginning of chapter five finds Scarlett standing in front of her mirror considering and discarding several gowns for the barbecue, including "a rose organdie with long pink sash" and "a black bombazine, with its puffed sleeves and princess lace collar," before deciding on the green-sprigged muslin that she had worn the day before (In the novel, Scarlett also brings along an apple-green water silk ballgown for the evening, but, unfortunately, that design never made it into the movie). 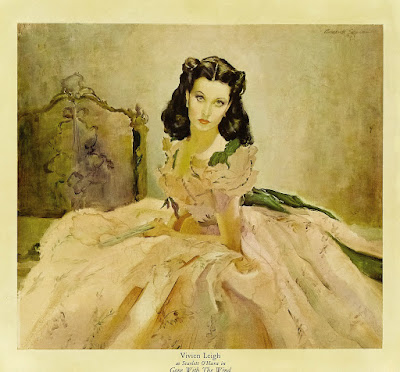 In some ways, the barbecue dress was typical Southern belle attire. It was made from muslin, a type of lightweight cotton cloth that was made in Southeast Asia and sometimes decorated with a hand-painted flower pattern. Muslin's lightweight fabric was highly sought after in hot climates like 19th century Georgia, and its exceptional draping abilities worked well with the wide hoop skirts that were fashionable at the time.

However, in other important ways, the green-sprigged muslin dress was a risque choice for an afternoon barbecue. The pattern, with its off-the-shoulder sleeves and plunging neckline, was that of a dancing dress, which was considered inappropriate attire for proper young ladies to wear at a daytime event in 1861.

Mitchell points this issue out in the novel, but it comes across much more subtly in the film. Mammy (Hattie McDaniel) chides Scarlett for "showing her bosom before 3 o'clock," and her dress is noticeably different from those Plunkett designed for the other young women at the barbecue, especially Scarlett's rival for the hand of Ashley Wilkes (Leslie Howard), Melanie Hamilton (Olivia de Havilland). No doubt, it's also one of the reasons Rhett Butler (Clark Gable) is grinning so broadly when he first spots Scarlett on Twelve Oaks grand staircase, and why Ashley's sister, India (Alicia Rhett), makes the catty comment that "men may flirt with girls like that, but they never marry them."

Originally, Leigh wore the barbecue dress during the opening scenes of GWTW, but producer David O. Selznick eventually decided that the dress was being overused and ordered Plunkett to create a new dress for those scenes (for more, see part one). Even so, Leigh looks stunning in the barbecue dress -- the green perfectly matches her eyes -- and the gown  has become the iconic version of Scarlett O'Hara, gracing everything from Madame Alexander dolls to Internet memes.

The barbecue dress is now part of the collection of The Natural History Museum of Los Angeles County, where it was painstakingly restored and put on display in 2014 for GWTW's 75th anniversary (you can read more about that here).

Next is the infamous curtain dress that Scarlett wears to visit Rhett in jail.