The Costumes of Gone With the Wind: Scarlett's White Ruffle Dress 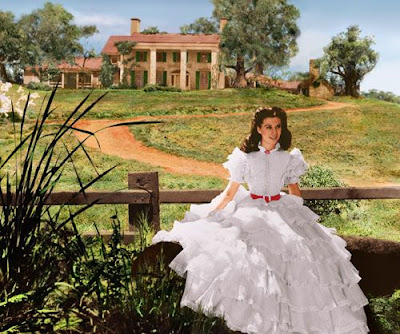 Today, I'm taking a behind the scenes look at the white dress Scarlett O'Hara (Vivien Leigh) wears during the opening scenes of Gone With the Wind (1939).

There are many reasons old Hollywood fans return again and again to Gone With the Wind (1939), but the movie's gorgeous costumes are one of the most richly rewarding. The designs from Walter Plunkett not only look stunning in glorious Technicolor, but they are also quite historically accurate thanks to Plunkett's tireless dedication to his craft. That's why I'm featuring a series on four of Scarlett O'Hara's gowns each Wednesday in July. First up is the white ruffled dress that Scarlett (Vivien Leigh) wears in the opening scenes of the movie.

As all GWTW fans know, the movie begins with a 16-year-old Scarlett sitting on the front porch of her home, Tara, while flirting with the Tarleton boys (George Reeves and Fred Crane) in a white cotton hoop-skirted dress that is accessorized with a matching red velvet belt, hair bows, and shoes. Scarlett continues to wear the dress during an outdoors scene with her father (Thomas Mitchell) and in the evening during the O'Hara family prayers (GWTW aficionados often refer to this costume as the "prayer dress" because of its use in this scene).

Ironically, the white ruffle dress was one of the last costumes Plunkett designed for GWTW. In the earliest versions of the scene, Leigh wore the green-sprigged muslin dress that was also used in the movie's barbecue scenes, but all-powerful producer David O. Selznick eventually discarded those takes for a variety of reasons, including clashes with director George Cukor (he was eventually replaced by Victor Fleming) and adjustments that needed to be made to the Technicolor photography (Reeves and Crane originally had bright red, curly hair which became a sickly color onscreen).

Finally, Selznick, who was always a perfectionist, decided that the green-sprigged muslin dress was being overused in GWTW, so he sent Plunkett back to the drawing board. Plunkett, who was fanatical about bringing authentic period details to his costumes, designed a gown that was inspired by the fashion trends of the Antebellum period.

Store-bought clothes were not common at the time, and most wealthy women, like Scarlett, took their fashion inspiration from magazines like Godey's Lady's Book, which provided color drawings known as fashion plates of the latest trends from New York and Paris, and dress patterns that could be copied by skilled seamstresses.

Plunkett's designs for the white ruffle dress are quite similar to many Godey's day dress designs of the late 1850's and early 1860's, which featured tightly fitted bodices, large ruffled hoop skirts, and tightly cinched waists that were showcased by belts and bows (go here for a look at some of the fashion plates). Even the white color, which Selznick insisted on because he believed it would emphasize Scarlett's innocence to the audience, appears to be correct. One illustration shows a mother with two children in a white day dress that, in real life, would probably be filthy in five minutes.

Like most things associated with GWTW, the white ruffle dress has had a long afterlife. The internet is filled with memorabilia including coloring books and Madame Alexander and Barbie dolls. You can even buy vintage patterns from the 1940's that offer a streamlined version of the dress or, if you want to unleash your inner Southern belle, there are online tutorials on how to make the full hoop-skirted version.


Next is the green sprigged muslin dress Scarlett wears to the Wilkes barbecue.