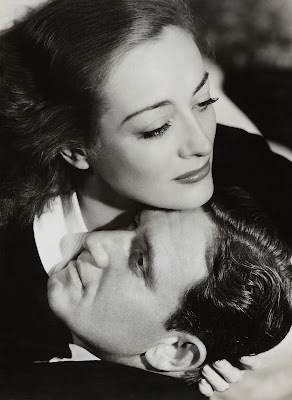 This article is part of The Joan Crawford Blogathon hosted by In the Good Old Days of Classic Hollywood.

Joan Crawford always liked to quote a popular saying that went around MGM in the 1930's: "Norma Shearer got the productions, Greta Garbo supplied the art, and Joan Crawford made the money to pay  for both." A fine example of Crawford's box-office prowess is Mannequin (1937), a first-rate soap opera that features Joan as a working girl who triumphs over poverty and a worthless husband (Alan Curtis).

Mannequin tells the story of Jessie Cassidy (Crawford), a garment district worker who lives in a tenement on New York City's Lower East Side with her layabout father (Oscar O'Shea), weary mother (Elisabeth Risdon), and smart-aleck younger brother (Leo Gorcey). Jessie gets so frustrated with her poverty-stricken lifestyle that she elopes with her long-time boyfriend (Curtis) even though he is something of a playboy who can't hold down a steady job. During a wedding dinner at a Chinese restaurant, Jessie meets millionaire shipping magnate John L. Hennessy (Spencer Tracy) who is immediately taken with the striking young woman. 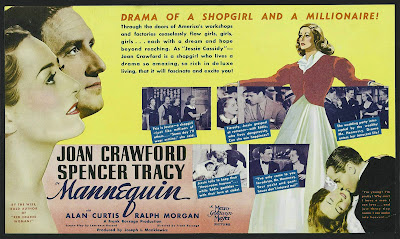 Mannequin is based on the short story "Marry for Money" by Katherine Brush that was intended for publication in the women's magazine Hearst's International-Cosmopolitan until MGM snapped up the rights for a Crawford vehicle (the movie title refers to Jessie's job as a department store model). Mannequin, which gave Crawford another working girl Cinderella role, was designed to restore her box-office clout after the failure of The Bride Wore Red (1937), an overly sophisticated romance (at least for Depression-era audiences) co-starring her then husband Franchot Tone.

MGM pulled out all the stops for Mannequin, including luxurious sets designed by Cedric Gibbons (even the tenements look immaculate) and gorgeous gowns by Adrian. Crawford also got a top director in Frank Borzage, and a first-rate cast, including Dead End Kid Gorcey, recent Academy Award-winner Tracy, and Risdon, who is quietly exceptional as Jessie's world weary mother.

Viewed today, Mannequin is a delight to watch, especially for Crawford fans. The movie checks off all of the hallmarks of Crawford's screen persona: there's stoic suffering (Borzage lights Joan beautifully while she quietly weeps in a tenement window); a hint of scandal (this movie is about as close to Indecent Proposal (1993) as any code-enforced Hollywood movie could get); slapping (Joan wallops Tracy twice), and, of course, shoulder pads.

However, the real appeal of Mannequin is Crawford's portrayal of Jessie, which is one of a long line of working class heroines that made Joan a champion to the secretaries, department store workers, and waitresses who crowded thirties movie houses. While Garbo had an indefinable air of mystery and Shearer provided the aspirational thrills of penthouse glamour, Joan's character in Mannequin was very relatable to audiences.  Jessie works long hours to provide a meager living for her family and then comes home to peel potatoes for supper in a rundown apartment with leaky faucets and a community bathroom. 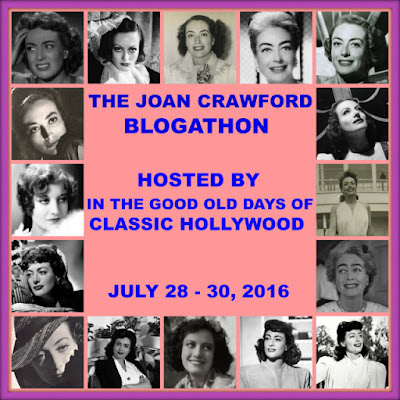 In many ways, Mannequin has a proto-feminist message. Jessie is her family's primary breadwinner; in fact, other than Hennessy, she is the only major character in the film who has steady employment, a situation that is brought to the forefront in one revealing scene in Jessie's parents apartment. Jessie and her mother are slaving away in a hot kitchen to put supper on the table, while her father, husband, and brother are lying around the living room plotting ways to get on government relief. While they are peeling potatoes, Jessie's mother recounts her own sad life's story, and urges Jessie to follow her own dreams even if it means leaving her increasingly worthless husband. This is a quite powerful message for an MGM film circa 1937, and it must have resonated deeply with the many women in the audience who derived entertainment, comfort, and inspiration from Crawford's movies.


Mannequin is available on DVD and video on demand.