I Am a Fugitive From a Chain Gang 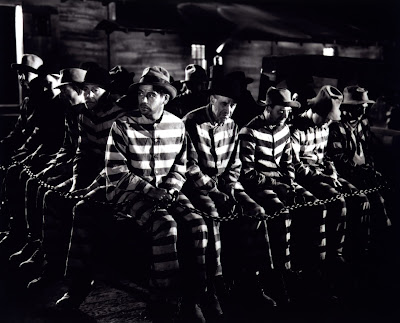 This article is part of the blogathon Hot & Bothered: The Films of 1932 hosted by Once Upon a Screen and CineMaven's Essays From the Couch.


I Am a Fugitive From a Chain Gang is one of the most influential films of 1932. Director Mervyn LeRoy's saga of life in a Southern prison made star Paul Muni one of the top actors of the 1930's and established the fast-paced, ripped from the headlines style of Warner's social problem movies.

I Am a Fugitive From a Chain Gang tells the story of James Allen (Muni), a down on his luck World War I veteran who gets sentenced to 10 years hard labor after getting inadvertently involved in a robbery. Allen endures harsh working conditions, poor food, and brutal beatings before hatching a daring escape plan that leads him into a furtive life of wandering the country. 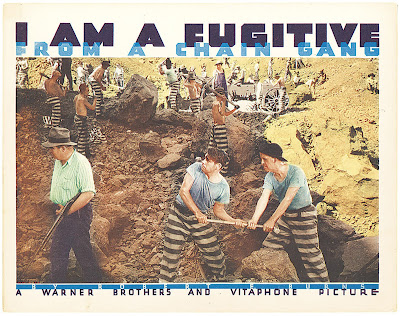 I Am a Fugitive From a Chain Gang was based on a series of stories in True Detective magazine by Robert Elliott Burns about his own experiences on a Georgia chain gang in the 1920's (Burns was sentenced to 10 years of hard labor for participating in the robbery of $5.80 from a grocery store, and he did escape from chain gangs twice). Darryl Zanuck, who was a Warner's producer at the time, was enthusiastic about making Burns' memoirs into a film, but he met with stiff opposition from Warner's brass.

The script department was firmly against adapting I Am a Fugitive From a Chain Gang largely because they feared it would offend Southerners, and director Roy Del Ruth, who was assigned to the project, flatly refused to make the picture, complaining that Burns' life story "lacked box-office appeal" and that "the subject was terribly heavy and morbid." Finally, studio chief Jack Warner interceded and gave the film his personal stamp of approval (Warner, despite being a notorious tightwad -- he once praised canine star Rin Tin Tin for "never asking for an air-conditioned dressing room"-- was one of the more visionary of the old Hollywood studio bosses). 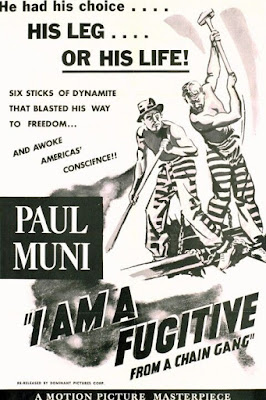 LeRoy was taken off of the musical 42nd Street to direct I Am a Fugitive From a Chain Gang, and he immediately hired Muni for the lead role. Muni was a well-respected stage actor who had only made two previous movies, and he threw himself into the project with his characteristic dedication. Muni, who went to Daniel Day Lewis levels of preparation, spent several days with Burns, visited California prisons, and ordered the Warner's research department to procure every book and magazine article ever written about the American penal system.

Muni's efforts resulted in a fine performance that is somewhat theatrical at times, but grows in range and depth as the film goes along (coincidentally, he also looks exactly James Franco in this movie). He hits the right notes again and again, especially in the film's iconic final scene where he backs away into the darkness while uttering the phrase, "I steal." Muni earned his second Academy Award nomination for I Am a Fugitive From a Chain Gang, and he got a long-term contract from Warner's, who billed him as "the world's greatest actor" in films like The Story of Louis Pasteur (1935) and The Life of Emile Zola (1937). 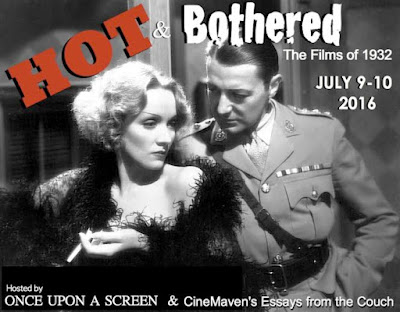 I Am a Fugitive From a Chain Gang also established Warner's as the studio for hard-hitting, ripped from the headlines movies that dealt directly with the social problems of the Great Depression. While MGM was churning out historical pageants and Paramount Pictures was serving up exotic glamour, Warner's made film after film about life on the mean streets of thirties America. It's unimaginable to think of any other major studio allowing one of their top actresses to play a vulgar, consumptive waitress like Bette Davis did in Of Human Bondage (1934), or letting their No. 1 star be dragged howling and screaming to the electric chair like James Cagney in Angels With Dirty Faces (1938).

It was this ability to deal with harsh realities that made I Am A Fugitive From a Chain Gang a major hit. The movie, which was released during the height of the Great Depression, struck a chord with the thousands of Americans who were waiting in bread lines or living in shanty towns while the nation's authority figures seemed indifferent to their plight. Like James, they too had lived by the rules and believed in the system only to have its casual cruelty exposed to them when they most needed help.

1932 blogathons I Am a Fugitive From a Chain Gang Paul Muni Warner Bros.