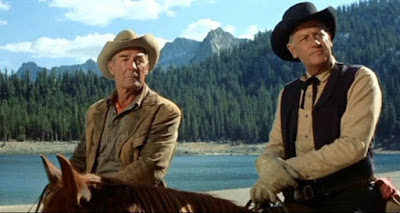 Ride the High Country (1962), starring Randolph Scott and Joel McCrea, is one of the classic movies airing on TCM this week.


This week, TCM is airing great movies from stars like John Wayne, Randolph Scott, and Olivia de Havilland. Plus, they are featuring Westerns and movies from the 1970's. So, without further ado, let's jump right in to this week's offerings. Just a note: the highlighted text has links to full length articles.

Sunday Prime Time: A celebration of British actress Googie Withers with three of her best films.

Best Day to DVR: Tuesday and Wednesday. TCM's spotlight on Westerns is bringing viewers 48 hours of some of the best American movies ever made.

This is a great week for . . .:  Errol Flynn fans. You've got delightful Western romp Virginia City (1940) during Wednesday's Randolph Scott tribute. Plus, four of the swashbuckling star's best films with Olivia de Havilland on Friday night.

Three daytime picks: TCM will feature old Hollywood Westerns each Tuesday and Wednesday in July. They are kicking off the festival with early Westerns like the very first horse opera, The Great Train Robbery (1903) at 6:15 a.m. and two later silents, The Vanishing American (1925) at 8 a.m., which features Richard Dix as a Navajo chief who must adapt to modern culture, and producer/director Cecil B. DeMille's epic, The Squaw Man (1914) at 6:30 a.m.
Prime time lineup: The evening selections focus on the legendary collaboration between actor John Wayne and director John Ford starting with their first film together, Stagecoach (1939) at 8 p.m. followed by Wayne's legendary performance as the obsessive Indian hunter Ethan Edwards in The Searchers (1956) at 9:45 p.m.
Late night pick: She Wore a Yellow Ribbon (1949) at 2:15 a.m. is my personal favorite among Ford and Wayne's cavalry trilogy. This beautiful Technicolor film features the actor as a retiring officer who must perform one last mission.

Three daytime picks: The Westerns continue with films from cowboy stalwart Randolph Scott. First up is Virginia City (1940) at 6:15 a.m. a fun romp that features Scott and Errol Flynn battling over Confederate gold and Miriam Hopkins. Next up are several of Scott's Westerns with director Edwin L. Marin, including the underrated Fort Worth (1951) at 2 p.m., which has a similar plot line to Unforgiven (1992). Ride Lonesome (1959) at 6:30 p.m., which features Scott as a bounty hunter who is bringing a killer (James Best) to justice, is one the cycle of Westerns he made with director Budd Boetticher.
Prime time lineup: The evenings selections focus on maverick director Sam Peckinpah starting with his elegiac Western about two aging cowboys (Scott and Joel McCrea) Ride the High Country (1962) at 8 p.m., followed by Peckinpah's film debut, The Deadly Companions (1961) at 9:45 p.m.

Late Night Pick: Peckinpah's masterpiece, The Wild Bunch (1969) at 11:30 p.m. revolutionized the Western with its use of graphic violence.

Three daytime picks: A birthday tribute to director George Cukor, who was born July 7, 1899, in Manhattan. Cukor was one of old Hollywood's most prolific directors, especially well-regarded for his work with actresses in movies like The Women (1939) at 3:45 p.m., which features sharp performances from Norma Shearer, Joan Crawford, and Rosalind Russell. Cukor also frequently collaborated with Katharine Hepburn in movies like the delightful rom-com Pat and Mike (1952) at 6 p.m., co-starring Spencer Tracy. You can round out your Cukor afternoon with the gentle costume drama David Copperfield (1935) at 1:30 p.m.
Primetime lineup: TCM is featuring films made in the 1970's each Thursday night in July. This week's selections focus on the decade's tumultuous politics, starting with the real life story behind the Watergate scandal in All the President's Men (1976) at 8 p.m. followed by Robert Redford's great performance as a cynical would-be senator in The Candidate (1972) at 10:30 p.m.
Late Night Pick: Director Francis Ford Coppola's taut thriller The Conversation (1974) at 2:45 a.m. is an ahead of its time look at the 24-hour surveillance of ordinary citizens.

Three daytime picks: The theme is movies made by writer-directors, starting with comic genius Preston Sturges' Hollywood satire Sullivan's Travels (1942) at 8:30 a.m. Next is the tragicomedy City Lights (1931) at 1:30 p.m., which is perhaps Charlie Chaplin's best film. Finally, The heist movie, The Asphalt Jungle (1950) at 5:30 p.m., is one of the best from noir master John Huston.
Prime time lineup: TCM is celebrating the centennial of living legend Olivia de Havilland by airing her films each Friday in July. This week's selections start with In This Our Life (1942) at 8 p.m. Both De Havilland and her pal Bette Davis are sensational in this underrated woman's picture about two Southern sisters who are rivals in love. Next is the George Custer biopic They Died With Their Boots On (1941) at 9:45 p.m., which features de Havilland as Custer's adoring wife, Libbie.
Late night pick: Dodge City (1939) at 2:15 a.m. is a fun Technicolor Western that features great chemistry between Errol Flynn and de Havilland.

TCM's prime time lineup is all about Hedda Hopper. She is best known today as a gossip columnist, but Hopper started out as an actress, mostly playing society matrons in films like Alice Adams (1935) at 8 p.m., where she plays a wealthy woman in a small Midwestern town. Hopper plays a countess who dislikes John Gilbert's murderous chauffeur in Downstairs (1932) at 10 p.m., followed by her role as a recent divorcee in Men Call It Love (1931) at 11:30 p.m.