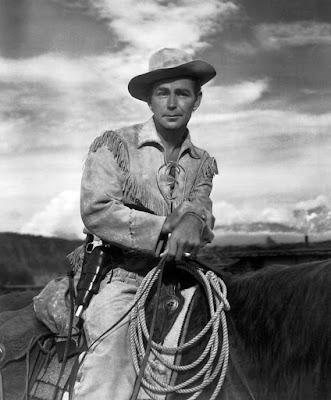 Shane (1953), starring Alan Ladd, is one of the classic movies airing on TCM this week.

This week, TCM is airing great movies from stars like Joe E. Brown, Eli Wallach, and Nancy Reagan. Plus, they are featuring  Western comedies and movies from cinema's African-American pioneers. So, without further ado, let's jump right in to this week's offerings. Just a note: the highlighted text has links to full length articles.

Silent Sunday Nights: Scar of Shame (1927) at midnight is a Broken Blossoms-like tale of a composer (Harry Henderson) who falls in love with a poor girl (Ann Kennedy) only to face prejudice from his family. Regeneration (1923) at 1:45 a.m. is a swashbuckler featuring a deserted island, pirates, and buried treasure.

Best Day to DVR: Tuesday night. The final week of the Westerns spotlight brings some of the best oaters ever made, including Shane (1953), The Ox-Bow Incident (1943), and Broken Arrow (1950).

This is a great week for . . .:  classic comedians. You've got Buster Keaton and Laurel and Hardy during Tuesday's Western comedies theme, and a birthday tribute to the always delightful Joe E. Brown on Thursday.

Three daytime picks: The theme is Depression-era romantic comedies starting with Joan Crawford as a working girl who moves through Franchot Tone, Gene Raymond, and Edward Arnold on her way to prosperity and happiness in Sadie McKee (1934) at 6:15 a.m. Marion Davies was a popular rom-com star in movies like Peg o' My Heart (1933) at 3:30 p.m. where she plays a spunky Irish lass who inherits a castle. Pre-code star Constance Bennett plays a good girl gone bad in Lady With a Past (1932) at 6:30 p.m.
Prime time lineup: TCM's evening lineup is devoted to actor Robert Francis, who was one of the most promising young actors of the 1950's before being killed in an airplane crash. Francis plays a gung-ho cadet in director John Ford's biopic The Long Gray Line (1955) at 8 p.m. about an Irish immigrant (Tyrone Power) who moves from a dishwasher to a non-commissioned officer. Francis had the lead role in the Korean War drama The Bamboo Prison (1955) at 10:30 p.m. about atrocities in a prisoner of war camp.
Late night pick: Francis' first film was The Caine Mutiny (1954) at midnight where he plays an eager young Naval officer who has a run-in with the unstable Captain Queeg (Humphrey Bogart).

Three daytime picks: TCM will feature old Hollywood Westerns each Tuesday and Wednesday in July. Tuesday's daytime theme is Western comedies starting with Buster Keaton as a young man who wants to be a cowboy in Go West (1925) at 6 a.m. followed by Laurel and Hardy heading Way Out West (1937) at 7:15 a.m. in one of their best feature films. The underrated comedy Callaway Went Thataway (1951) at 11:15 a.m. finds Fred MacMurray and Dorothy McGuire as on-the-make advertising executives who have a real cowboy (Howard Keel) impersonate a popular Western star.
Prime time lineup: TCM focuses on Westerns featuring barroom brawls, including Alan Ladd and Jack Palance duking it out in Shane at 8 p.m. and Henry Fonda and Harry Morgan against a lynch mob in The Ox-Bow Incident  at 10:15 p.m.
Late night pick: James Cagney and Humphrey Bogart bring some New York-style brawls to the old West in The Oklahoma Kid (1939) at 5:30 a.m.

Three daytime picks: The Westerns continue with true stories starting with composer Irving Berlin's musical biopic of sharpshooter Annie Oakley (Betty Hutton) in Annie Get Your Gun (1950) at 10 a.m. Raymond Massey gives an intense performance as firebrand abolitionist John Brown in the Errol Flynn/Olivia de Havilland Western Santa Fe Trail (1940) at 2 p.m. followed by Paul Newman's turn as legendary outlaw Billy the Kid in The Left-Handed Gun (1958) at 6:30 p.m.
Prime time lineup: The evening's selections focus on revisionist Westerns. This genre, which featured brooding anti-heroes, lots of violence, and sympathetic portrayals of American Indians, flourished during the 1960's and 1970's. One of the first revisionist Westerns was cult director Monte Hellman's The Shooting (1966) at 8 p.m., which stars Millie Perkins as a mysterious woman who engages two bounty hunters (Warren Oates and Will Hutchins) on a dangerous journey. Dustin Hoffman plays the Forrest Gump of the old West in director Arthur Penn's Little Big Man (1970) at 9:30 p.m.

Late Night Pick: One of the best revisionist Westerns is director Robert Altman's McCabe and Mrs. Miller (1971) at midnight, which stars Warren Beatty and Julie Christie as a gambler and a prostitute in a remote mining town.

Three daytime picks: A birthday tribute to comedian Joe E. Brown who was born Joseph Evans Brown on July 28, 1891, in Holgate, Ohio. After a successful professional baseball career, Brown became a star in vaudeville and on Broadway. He broke into films in 1928 and became a comedy star at Warner Bros. in early talkies like the musicals Sally (1930) at 7:45 a.m. and Going Wild (1931) at noon. Brown's movies often had a sports theme like Local Boy Makes Good (1931) at 1:15 p.m. where he plays a timid college student who becomes a track and field star to impress the lovely Dorothy Lee.
Primetime lineup: TCM is featuring films made in the 1970's each Thursday night in July. This week's selections focus on road movies, which was a popular genre during the decade. First up is Al Pacino and Gene Hackman as a hitchhiking odd couple in Scarecrow (1973) at 8 p.m. followed by Jack Nicholson's legendary performance as a volatile Navy officer in The Last Detail (1973) at 10 p.m.
Late Night Pick: Director John Huston's adaptation of Southern writer Flannery O'Connor's novel Wise Blood (1979) at midnight follows the peripatetic journey of a self-declared Southern preacher (Brad Dourif).

Three daytime picks: A tribute to former First Lady Nancy Reagan, who passed away March 16. Reagan, who was then known as Nancy Davis, met her future husband Ronald Reagan while she was working as an MGM contract player on such films as the noir Shadow on the Wall (1950) at 6:30 a.m. where she plays a child psychiatrist who tries to help a young girl (Gigi Perreau) who witnesses her stepmother's murder. Reagan's favorite role was as the loyal girl Friday to bereaved college professor Ray Milland in Night Into Morning (1951) at 9:30 a.m. In the science fiction movie Donovan's Brain (1953) at 3:30 p.m. Reagan played the wife of scientist Lew Ayres, who becomes possessed by a dead billionaire's gray matter.
Prime time lineup: TCM is celebrating the centennial of living legend Olivia de Havilland by airing her films each Friday in July. This week's selections feature some of her later movies starting with de Havilland's cameo appearances in the swashbuckler The Fifth Musketeer (1979) at 8 p.m., and the sci-fi schlockfest The Swarm (1978) at 10 p.m.
Late night pick: De Havilland gives a beautifully nuanced performance as the mother of an intellectually disabled daughter (Yvette Mimieux) in Light in the Piazza (1962) at 12:15 a.m.

TCM's prime time lineup is all about character actor Eli Wallach starting with his part in the spaghetti Western trio of Clint Eastwood and Lee Van Cleef in The Good, The Bad, and The Ugly (1968) at 8 p.m., followed by his role as a psychopathic killer in the police drama The Lineup (1958) at 11:15 p.m. Wallach plays a rabbi who becomes involved with a photographer (Melanie Mayron) in Girlfriends (1978) at 1 a.m.

The Sunday Night Feature focuses on the pioneers of African-American film starting with director Spencer Williams's classic The Blood of Jesus (1941) at 8 p.m. about a man's religious conversion after his wife's near-death experience.The musical, Dirty Gertie From Harlem U.S.A. (1946) at 9:15 p.m., is adapted from W. Somerset Maugham's story, Rain, which had already been made into movies starring Gloria Swanson and Joan Crawford. Heaven Bound Traveler (1930) and Verdict Not Guilty (1932) at 10:30 p.m. are two religious-themed shorts from talented directors James and Eloyce Gist.

Check back next Sunday (7-31) for a special viewer's guide for week one of TCM's Summer Under the Stars event.