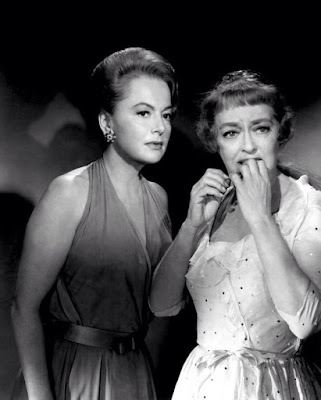 Hush. . .Hush, Sweet Charlotte (1964), starring Olivia de Havilland and Bette Davis, is one of the 1001 classic movies you should see.

Each Monday, I'm going to recommend a classic movie you should see (for the reasons behind the 1001 series and reviews of earlier films covered go here). Old Hollywood legend Olivia de Havilland celebrated her 100th birthday on July 1, so this month I'm honoring her centennial by looking at three of her best movies. Today's selection is the Southern Gothic horror movie, Hush. . .Hush, Sweet Charlotte (1964).

Hush. . .Hush, Sweet Charlotte tells the story of Charlotte Hollis (Bette Davis), a wealthy unmarried woman who lives with her slovenly housekeeper (Agnes Moorehead) on a rundown Louisiana plantation. Charlotte is shunned by her neighbors because they believe she was involved in the gruesome murder of her married lover (Bruce Dern) several decades ago, and she becomes the talk of the town again when she refuses to leave her home after it is slated to be destroyed because of a road construction project. When Charlotte's cousin Miriam (de Havilland) and a local doctor (Joseph Cotten) arrive to help ease her out of her home, tensions quickly mount when Charlotte begins having disturbing flashbacks to the night of the murder. 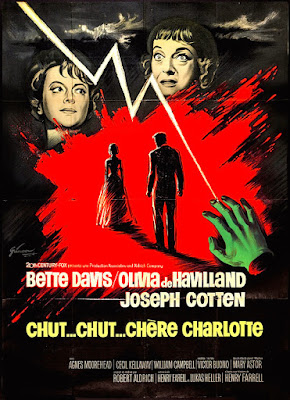 Hush. . .Hush, Sweet Charlotte is based on an unpublished short story by Henry Farrell that director Robert Aldrich acquired for Davis and Joan Crawford. The trio had scored an unexpected hit with 1962's Whatever Happened to Baby Jane?, and Aldrich was eager to reunite the sparring actresses for what he hoped would be another critical and box-office success. However, a fed-up Crawford quit after 12 days of filming, which left a desperate Aldrich scrambling to find a replacement. After wearing out his Rolodex calling virtually every prominent actress in Hollywood, Aldrich approached de Havilland, who reluctantly accepted mostly because of her close friendship with Davis.

Despite de Havilland's reluctance, she is brilliant as the outwardly sweet, but inwardly scheming Miriam. Her performance is not only the best in Hush. . .Hush, Sweet Charlotte, but it also ranks among the best work in her entire career. In fact, Miriam hearkens back to de Havilland's role as Melanie Hamilton Wilkes in Gone With the Wind (1939), but instead of revealing inner reserves of strength as she does in GWTW, Miriam gradually drops her butter wouldn't melt exterior to reveal an evil woman, who is a vicious gossip, unrepentant blackmailer, and possibly a murderess.

Hush. . .Hush, Sweet Charlotte Viewer's Guide: This movie is both an over the top horror film and a showcase for some of the best actors of old Hollywood's golden age. Here's what to look for when you watch:

1. The casting of Miriam. Virtually every prominent actress was considered for the part of Charlotte's scheming cousin and it's a fun parlor game to consider what might have been. Vivien Leigh would have added to her roster of scheming Southern belles, Barbara Stanwyck would have brought some femme fatale spice a la Double Indemnity(1944), but to me both Katharine Hepburn and Loretta Young, who were both considered, are unthinkable in the part.
2. Mary Astor. The actress, who is well-known to old Hollywood fans for her roles in The Maltese Falcon (1941), Meet Me in St. Louis (1944), and The Palm Beach Story (1942), has a crucial cameo as the wife of Charlotte's lover.
3. Violence. By today's horror film standards Hush. . .Hush Sweet Charlotte is pretty tame, but the movie's depiction of a man's dismemberment was considered quite shocking at the time. Both Astor and de Havilland were appalled when they first read the script, and it caused some critics of the day to pan the movie.
4. Theme song. Charlotte's lover composes a soothing lullaby for her that is heard throughout the movie. Al Martino sang the version that is heard over the closing credits, but Patti Page scored a top 10 hit with her version of the song.

Other critics: Hush. . .Hush, Sweet Charlotte has an 85 percent fresh rating at Rotten Tomatoes, and Leonard Maltin calls the movie "confusing at times, but worth watching for its cast" in a three star review for his Classic Movie Guide. Critics in 1964 had mixed opinions of the movie. Powerful The New York Times critic Bosley Crowther gave the movie an unqualified pan writing that "So calculated and coldly carpentered is the tale of murder, mayhem and deceit that Mr. Aldrich stages in this mansion that it soon appears grossly contrived, purposely sadistic and brutally sickening. So, instead of coming out funny, as did Whatever Happened to Baby Jane?, it comes out grisly, pretentious, disgusting and profoundly annoying." Other critics were much more positive about the movie, including Judith Crist who wrote that "the guignol is about as grand as it gets," and Kenneth Tynan, who thought it was Davis' best role since The Little Foxes (1941).

The bottom line: Hush. . .Hush, Sweet Charlotte is a bit too plot heavy at times, but it's still a fun movie that serves as a tribute to the talents of many great actors from old Hollywood.

Availability: Hush. . .Hush, Sweet Charlotte is available on DVD and video on demand.