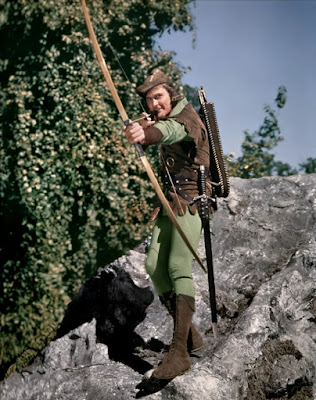 The Adventures of Robin Hood (1938), starring Errol Flynn, is one of the 1001 classic movies you should see.

Each Monday, I'm going to recommend a classic movie you should see (for the reasons behind the 1001 series and reviews of earlier films covered go here). Old Hollywood legend Olivia de Havilland celebrated her 100th birthday on July 1, so this month I'm honoring her centennial by looking at three of her best movies. First up, is her best film with frequent co-star Errol Flynn, The Adventures of Robin Hood (1938).

The Adventures of Robin Hood tells the story of  Sir Robin of Locksley, aka Robin Hood (Flynn), a Saxon nobleman who fights the high taxes and oppression of England's cruel Normans rulers with his band of merry men, who live as outlaws in Sherwood Forest. Robin also has an eye for the beautiful Norman lady, Maid Marian Fitzwalter (de Havilland), who returns his affections. 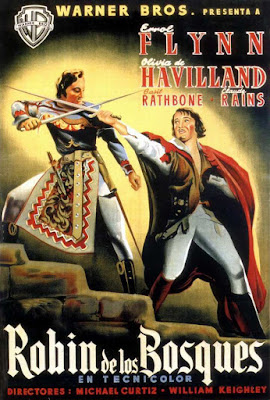 The Adventures of Robin Hood started out as a vehicle for Warner Bros. No. 1 star James Cagney, but the studio quickly changed their plans when Cagney walked out during one of his contract disputes with the studio. Warner's brass then gave the script to the screen team of Flynn, de Havilland and director Michael Curtiz, who had already scored two major hits for the studio in the pirate saga, Captain Blood (1935) and the British Raj action-adventure tale, The Charge of the Light Brigade (1936). The result was a massive hit that bolstered audiences' spirits during the Great Depression and World War II and, even in 2016, continues to delight moviegoers around the world.

The Adventures of Robin Hood is the best of the nine Flynn/de Havilland movies. Later in her career, De Havilland grew tired of playing bland love interest roles, but both she and Flynn are at their best in this movie. De Havilland looks stunningly beautiful in her gorgeous Milo Anderson costumes, and she and Flynn have real chemistry from the moment he walks into a Norman dining hall carrying a deer around his shoulders. The pair bicker, flirt, and swoon in glorious Technicolor until they ride off together in one of the happiest of old Hollywood endings.


The Adventures of Robin Hood Viewer's Guide: This action-adventure movie puts the "glorious" in glorious Technicolor. Here's what to look for when you watch:
1. Robin Hood legend. The Adventures of Robin Hood was part of a renewed interest in the English outlaw that stemmed from Howard Pyle's 1883 novel, The Merry Adventures of Robin Hood, and Douglas Fairbanks' 1922 silent film. However, this movie has become the gold standard for the the Robin Hood legend, influencing everything from the 1973 Disney version to Alan Rickman's hammy villainy in Robin Hood: Prince of Thieves (1991).
2. Technicolor. This was one of Warner's first movies using three-strip Technicolor, and, as such, it is a visual feast. Almost 80 years later, the saturated colors of the Milo Anderson's costumes still leap off of the screen, and it also has some of the most beautiful outdoors scenes in movie history.
3. Villains. Most movies are lucky to have one memorable villain, but The Adventures of Robin Hood has three: Claude Rains as the fey Prince John, Basil Rathbone as the cruel and manipulative Sir Guy of Gisbourne, and Melville Cooper as the dim, but determined sheriff of Nottingham.
4. Bess and Much, the miller's son. De Havilland and Flynn are Robin Hood's main couple, but it's hard not to root for the unlikely romance between Maid Marian's much-married servant, Bess (Una O'Connor), and the shy, awkward Much (Herbert Mundin), who is one of Robin's merry men.

Other critics: The Adventures of Robin Hood  has a 100 percent fresh rating at Rotten Tomatoes, and Leonard Maltin calls it the "definitive swashbuckler" in which de Havilland was "never lovelier" in a four star review for his Classic Movie Guide. Critics in 1938 also handed out raves. The New York Times critic Frank S. Nugent praised the movie, writing that the film was "a richly produced, bravely bedecked, romantic and colorful show, it leaps boldly to the forefront of this year's best" while Variety raved that The Adventures of Robin Hood was  "a highly imaginative retelling of folklore in all the hues of Technicolor, deserving handsome box office returns." The only sour note came from The New Yorker critic John Mosher who felt that the supporting cast was "somewhat buried under the medieval panoply."

The bottom line: It's difficult not to fall under the spell of The Adventures of Robin Hood, even for those who usually don't like classic movies. Just sit back and enjoy the action and romance in glorious Technicolor.

Availability: The Adventures of Robin Hood is available on DVD, Blu ray, and video on demand.

Next week, I'll continue the theme of Olivia de Havilland movies with her powerful psychological drama The Snake Pit (1948).