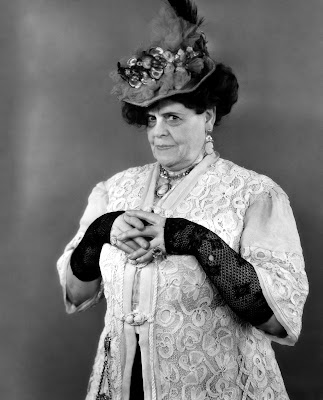 TCM's June star of the month is the irrepressible Marie Dressler.


TCM is honoring Marie Dressler with 17 movies airing each Monday in June.  Here's what you need to know about one of old Hollywood's most unusual leading ladies. FYI: TCM sometimes changes the air times and /or movies, so you can go to www.tcm.com to check the updated schedule.

AKA: Dressler was born Leila Marie Korber. Acting was considered a scandalous profession in the 19th century, so Dressler dropped her first name and changed her last name to that of a beloved aunt to avoid embarrassment to her family

Brief bio: Dressler grew up in rural Ontario as the daughter of an itinerant music teacher and organist. The family eventually moved to the US where Dressler, who always loved performing in church recitals, ran away at age 14 to join a theater company. Dressler eventually worked her way up to Broadway where she became a star in comedies. A version of one of her stage hits, Tillie's Punctured Romance (1914), was made into a  successful silent film that helped launch the career of Charlie Chaplin. Despite making two sequels to Tillie's Punctured Romance, Dressler didn't find much work in movies, and her career on the stage also declined. Dressler was near poverty in 1927 when her friend, screenwriter Frances Marion, got her a plum part in The Callahans and the Murphys. Dressler's career really took off with the arrival of sound in 1929, and she became a break-out star in the Greta Garbo vehicle, Anna Christie (1930). After that, Dressler became one of the most popular movie stars of the early 1930's, beating out glamazons like Garbo, Marlene Dietrich, and Jean Harlow for top female star and winning an Oscar for her tragicomic role in Min and Bill. Dressler was stricken with cancer at the height of her popularity and passed away at age 64.

Fun Fact: Dressler is one of four old Hollywood stars that Canada honored with a postage stamp. The others are Norma Shearer, Raymond Burr and Chief Dan George.

Quote: "You're only as good as your last picture."


My Star of the Month Top Four:
My picks are a groundbreaking silent film, a star-making performance, an Oscar winner, and an underrated gem.

Week 1.  Tillie's Punctured Romance, airing at 12:45 a.m. Monday night/Tuesday morning: In this delightful comedy, Dressler plays a naive country girl who is taken in by city slicker Charlie Chaplin, who is playing a very different role from his Little Tramp character. This film is notable for being Chaplin's breakthrough and for being the first full-length comedy in American films.
Week 2. Anna Christie, airing at 8 p.m.: This adaptation of Eugene O'Neill's drama about New York dock workers was designed as a showcase for Garbo, but Dressler, as a talkative drunk, effortlessly steals every scene she's in.
Week 3. Min and Bill, airing at 8 p.m.: Dressler won her only Oscar for her portrayal of kindhearted, but rough-around-the-edges innkeeper Min Divot. Her onscreen battles with co-star Wallace Beery are hilarious.
Week 4.  Emma (1932), airing at 11:45 p.m.: Dressler gives a deeply moving performance as a middle-aged housekeeper who falls in love with her employer (Jean Hersholt).

Fan Magazine Flashback: MGM touted Dressler as the cure for the Great Depression in this vintage ad for Emma. 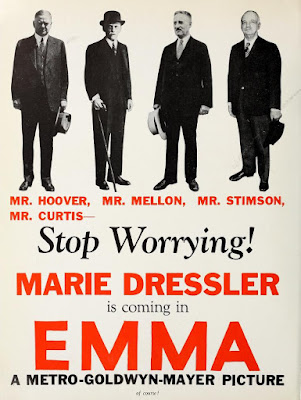 Old Hollywood GIF: The ingenious credits for Dinner at Eight (1933). Courtesy of Giphy.