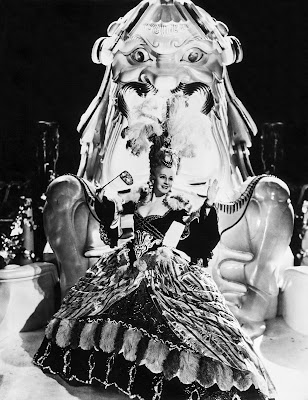 This article is part of The Royalty on Film Blogathon hosted by The Flapper Dame.

Eighteenth century French Queen Marie Antoinette is still a pop culture icon for her over-the-top fashions and her tumultuous life story. MGM's lavish 1938 biopic, which was one of the most expensive films of the 1930's, gives a sympathetic and surprisingly accurate portrait of the life of this fashion queen turned revolutionary martyr.

Marie Antoinette begins when the 14-year-old Austrian archduchess (Norma Shearer) is informed that she will marry the heir to the throne of France (Robert Morley). Marie Antoinette is excited by the news, but once she arrives at Versailles, she finds that her Prince Charming is actually a shy, awkward man who prefers fixing clocks to spending time with his new wife. Despite her passion for a handsome Swedish nobleman (Tyrone Power), she and Louis come to love and respect each other until the revolutionary fervor of the common people threaten to tear their family apart. 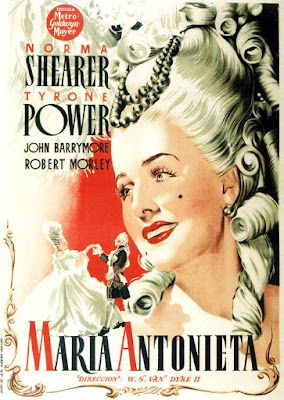 Marie Antoinette is based on a 1932 biography of the French queen by Stefan Zweig. Biopics of royal ladies like Greta Garbo's Queen Christina (1933) and Marlene Dietrich's The Scarlet Empress (1934) were in vogue at the time, and at first it was speculated that Marion Davies might take the role (powerful newspaper magnate William Randolph Hearst, who was in a romantic relationship with Davies, was keen for her to play the part), but that changed when producer Irving Thalberg took over the project.

Thalberg planned a lavish production filmed on location in Europe that would be a showcase for the talents of  Shearer, who was one of MGM's top stars and Thalberg's wife. After Thalberg's untimely death in 1936, that version of the movie was scrapped. Instead, Shearer and the rest of the cast and crew dedicated themselves to making a movie in Hollywood that would be a tribute to Thalberg's genius.

Costume designer Adrian and art director Cedric Gibbons did travel to Europe where they pored over paintings and books and toured several palaces so they could accurately recreate life in the Ancien Regime. Gibbons shipped antique French furniture back to Hollywood, and Adrian came back loaded down with antique fabrics, authentic French lace, and jewels that he used to create dozens of lavish costumes, including a replica of Marie Antoinette's wedding gown that weighed a whopping 108 pounds.

The result was a budget-busting spectacle that cost the studio around $3 million, according to some estimates, but the sheer spectacle of it all and the popularity of newly minted matinee idol Power meant that the movie did do well at the box office. Today, Marie Antoinette is still a wonderful film that is both a tribute to the grandeur that was old Hollywood, and a fairly engrossing drama about the life of a woman who was the victim of forces beyond her control. 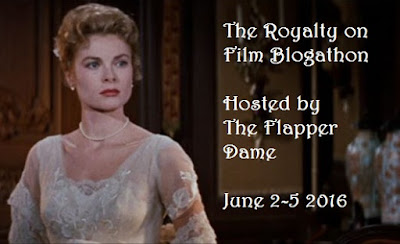 While there is certainly a lot of soapy melodrama, especially in the love scenes between Shearer and Power, Marie Antoinette portrays the French queen's life with surprising accuracy, although the events depicted are somewhat simplified.

Shearer always counted Marie Antoinette as her favorite screen role, and she gives a fine performance that increases in emotional power as the movie progresses. In fact, Zweig's biography, which was meticulously researched, was one of the first books to rehabilitate Marie Antoinette's image. She was vilified during her lifetime as a vapid fashion plate who partied the night away while the French peasants starved, but Zweig presented the French queen as a woman of great character and courage, especially during the searing events of the French Revolution. Shearer does an excellent job of portraying these qualities in Marie Antionette, especially in the movie's final moments.


Marie Antoinette is available on DVD and video on demand.