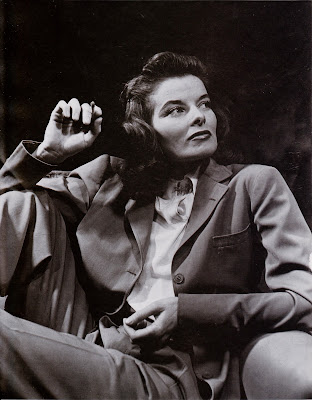 Today, I'm writing about six of Katharine Hepburn's thirties movies from Mary of Scotland (1936) to Holiday (1938).

This is the third article in a three-part series. Here's part one and part two. 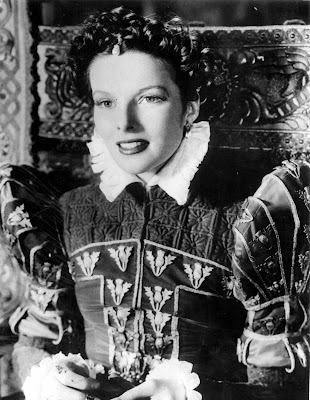 Katharine Hepburn began her film career in 1932 with a box-office hit (A Bill of Divorcement), and since that time she had starred in a blockbuster (Little Women), some misfires (most notably her turn as an Ozarks faith healer in Spitfire), and critically acclaimed roles (she won her first of four Academy Awards for Morning Glory).  However, Hepburn's last film, the gender-bending comedy-drama Sylvia Scarlett (1936), was a huge critical and commercial disappointment.

Hepburn badly needed a course correction to stay relevant in Hollywood, so RKO producer Pandro S. Berman put Hepburn in a lavish production  of Maxwell Anderson's blank verse play Mary of Scotland that had been a huge hit on Broadway for Helen Hayes. The finished film, which was directed by John Ford, has some interesting moments, especially Moroni Olsen's performance as the fiery curate John Knox and Mary's trial, but for the most part it is a deadly dull affair with Hepburn striding around the set flaring her nostrils and emoting while a bemused Fredric March (he plays Mary's third husband, the Earl of Bothwell) looks on. TCM at 4:30 a.m. Sept. 15. DVD and video on demand. 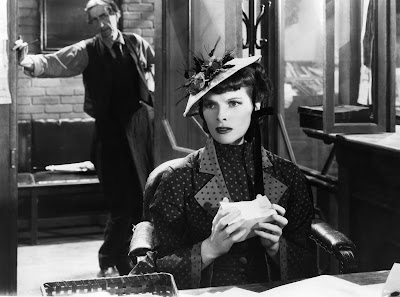 Mary of Scotland was a dud, but Berman, who was probably thinking of the record-breaking grosses of Little Women, quickly put Hepburn in two 19th century costume dramas. The first was A Woman Rebels based on the novel Portrait of a Rebel by Netta Syrett, which tells the story of a young suffragette from an aristocratic family who defies her autocratic father (Donald Crisp) in both love and politics.

While Hepburn was ill-suited to play the tragic Mary, Queen of Scots, the role of Pamela Thistlewaite fit the independent actress like a glove. While the movie does have its share of soapy melodrama -- the plot is basically Lady Edith's story arc on Downton Abbey -- Hepburn is simply wonderful in the role. She and the always excellent Crisp have a titanic battle of the wills and when she takes over a women's magazine and changes the editorial content from sewing tips to gender inequality the audience is witnessing Kate at the top of her game. Also, Walter Plunkett's costumes are to die for. DVD. 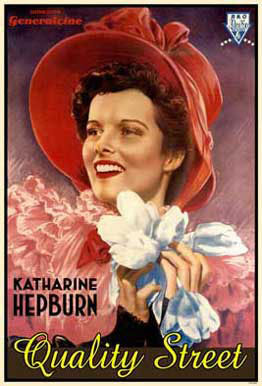 A Woman Rebels was a flop, but Hepburn once again donned crinolines and lace for an adaptation of J.M. Barrie's play Quality Street, about a 19th century English spinster who masquerades as her niece to win over the man she loves (a bored Franchot Tone) after he returns from the Napoleonic Wars.

Despite the implausibility of the plot, this movie is a delightful treat, especially for anyone who loves the Regency period (don't miss this if you are a fan of the novels of Georgette Heyer). Hepburn is superb as the flighty Phoebe both in her younger days -- Hepburn's reaction when she mistakes Tone's announcement of joining the military with a marriage proposal is quite funny -- and she also subtly but effectively brings out Phoebe's darker, more calculating side when she masquerades as her niece. DVD and video on demand.

Quality Street was another flop, so Hepburn fled Hollywood for the stage, where she appeared in a version of Jane Eyre  that toured the country. Hepburn hoped to take the play to Broadway, but when her preferred co-star Laurence Olivier backed out and she received a withering advance review from the powerful The New York Times critic Brooks Atkinson, she was forced to drop the play and return to Hollywood.

Meanwhile, Berman had finally realized that thirties audiences didn't want to see Hepburn in stuffy costume dramas, so he cast her as Terry Randall, an aristocratic young woman who is trying to make it on Broadway, in the all-star adaptation of Edna Ferber and George S. Kaufman's play.

Hepburn is basically a co-lead with Ginger Rogers, who plays a wisecracking dancer, and her performance is a brilliantly modulated star turn. In fact, Terry's character fit very well with Hepburn's public persona: Terry can be an irritating, haughty know-it-all who is prone to uplifting lectures, but she also has a warm and loving side that is shown in her relationship with a troubled young actress (Andrea Leeds). The calla lilies speech is an iconic moment in both the film and Hepburn's career, proving that she was a skilled actress who could summon real emotion on screen. DVD and video on demand.

Stage Door was a hit, so Berman immediately cast Hepburn in director Howard Hawks' screwball comedy Bringing Up Baby. Hepburn knew that she needed another box-office success to secure her future in Hollywood, and she toned down her usual opinionated style during Bringing Up Baby's filming and even went through several weeks of coaching that Hawks dubbed "comedy school" before the film began.

The result is one of the great screwballs of the thirties with Hepburn playing a dizzy society type, Susan Vance, who pursues a meek paleontologist, David Huxley (Cary Grant), through a series of misadventures that involve a pet leopard. While Grant turns in excellent work as the increasingly irritated David, Hepburn is a force of nature, especially when she's wandering through the woods while singing "I Can't Give You Anything But Love" in her distinctive Yankee accent. DVD and video on demand. 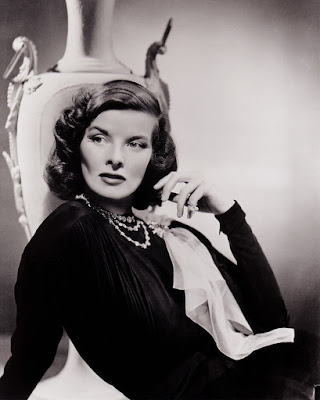 Bringing Up Baby was a moderate hit in urban areas, but it sank like a stone in the rest of the country, and Hepburn, along with stars like Greta Garbo and Marlene Dietrich, was labelled "box-office poison" by the Independent Theater Owners of America. Berman next tried to cast Hepburn in a dismal part in a B-movie called Mother Carey's Chickens, but she flatly refused and bought out her own contract for $200,000.

Hepburn and her frequent collaborator George Cukor then secured a one-movie deal at Columbia Pictures for Holiday, an adaptation of Philip Barry's play about a self-made man (Grant) who becomes engaged to a wealthy young woman (Doris Nolan) only to fall for her unconventional sister (Hepburn).

Holiday was close to Hepburn's heart: She had understudied the role of Linda on Broadway, and she performed a scene from Holiday for her first screen test for RKO. Hepburn is wonderfully at home in the part -- as her biographer Sheridan Morley points out the Seton's are quite similar to Hepburn's own family -- and she brings a strength and nonconformity to the role that as the critic Pauline Kael noted "made ordinary heroines seem mushy."

Holiday is now considered a classic, but audiences in 1938 stayed away in droves. Morley speculates that in the midst of the Great Depression, moviegoers didn't have time for the problems of the idle rich, and it effectively ended her Hollywood career until she returned in triumph with The Philadelphia Story in 1940. DVD and video on demand.